Has ‘war on drugs’ cut down crime? MANILA, Philippines – Philippine National Police (PNP) chief Director General Ronald dela Rosa on Tuesday, August 23, trumpeted the reported 31% decrease in the index crime volume of July 2016 compared to the same period last year, citing it as “an indication of the success of our anti-drug campaign.”

Dela Rosa presented crime data from the PNP on Tuesday, August 23, during the Senate’s second hearing on the spate of killings in the context of the government’s ongoing “war on drugs.”

Index crimes include those committed against persons such as murder, homicide, physical injury and rape and crimes against property such as robbery, theft, carnapping and carjacking, and cattle rustling. 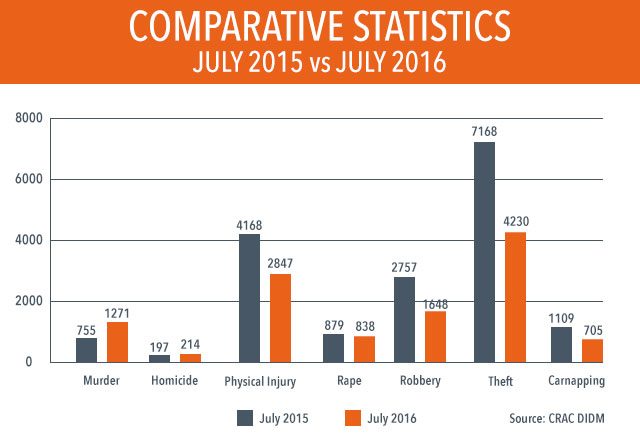 The PNP recorded a decrease in almost all types of crimes, save for murder and homicide.

Dela Rosa faced the Senate for a second straight day on Tuesday for a hearing to investigate the rise in killings amid a nationwide “war on drugs.” The Senate is also investigating allegations of extrajudicial killings during police operations.

From July 1 to August 22, at least 756 drug suspects were killed in police operations around the country. The same operations led to the arrest of more than 11,700 drug users and pushers.

More than 670,000 drug users and pushers, meanwhile, have surrendered to authorities amid the crackdown on illegal drugs.

Dela Rosa defended the PNP from allegations that killings were center to their operations against illegal drugs, saying that the numbers indicate that more effort has been poured into making drug users and pusher surrender.

“The focus is really on the Project Tukhang or the conduct of house visitations in order to persuade users and pushers to stop with their illegal activity as there are more surrenders and arrested than killed drug personalities as a result of the police operations,” he said.