Aug 27, 2016 11:30 AM PHT
Facebook Twitter Copy URL
Copied
'Why should I be ashamed? My sexual preference never hindered my mission as a Catholic priest,' says Father 'RJ' 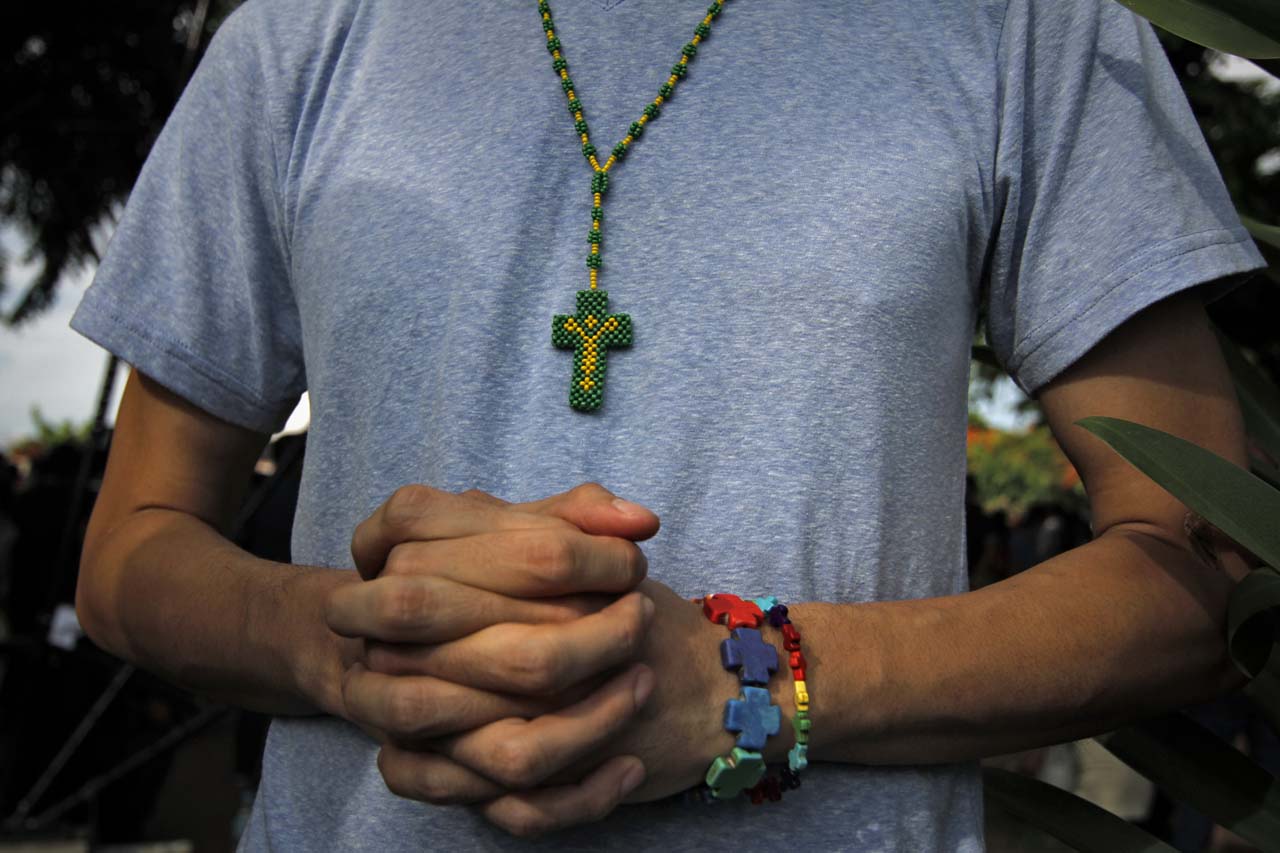 MANILA, Philippines – It was a public display of personal colors and affection: people smiled, hugged and kissed each other as they proclaimed, “Love wins.”

In the middle of the annual Manila LGBT pride parade earlier this year was a Catholic priest, who claimed his faith grew stronger after he embraced his true self.

“I am gay,” declared Father RJ*. “Homosexuality it is not an issue anymore within the Catholic clergy.”

Together with his friends and hundreds other members of the LGBT community, the priest joined the parade with pride and confidence.

“This represents my sexuality and religiosity,” the 36-year-old priest said, pointing to his rainbow-colored bracelet of crosses. “Why should I be ashamed? My sexual preference never hindered my mission as a Catholic priest.”

“Since the day I understood my real identity and fully embraced my sexuality, I also got to understand how to serve God with everything I have, without pretending to be someone I am not,” RJ added.

Four years ago, RJ, took his final vows of chastity, poverty, and obedience, vows he described as “pillars which give form to my being.”

Before he joined the priesthood, RJ’s existence revolved around a decadent city life.

RJ, a certified public accountant, has degrees in economics and accountancy. He worked as a teacher for a year before entering the seminary.

The priest recalled the days when he realized his strong sexual attraction to men, something that once confused him of his worth and relevance.

“It was in puberty when I had a strange feeling of attraction to the same sex. I knew then I was gay but it also worried me,” RJ said.

RJ was raised in a conservative family with traditional Catholic values. The fear of rejection troubled him for many years.  Afraid of discrimination and rejection, he tried to hide his true self. The college boy tried to mask his sexuality with academic achievements and a glamorous bachelor life.

He continued the charade but not for long.

“I fell in love with a man who taught me how to accept my true identity,” RJ said.

RJ was swept into a year of “firsts.” His first bouquet of roses, first time to hold hands while walking, first time to hear and get notes with “sweet nothings,” his first kiss, and his first gay sexual encounter.

“Our days were among the happiest moments of my life. I felt I belonged and recognized. I was freer; I didn’t have to hide my fears. I was me whenever I was with him,” he said.

The time came when the colorful, most joyful moments became the saddest memories. The sweetest love notes became a playlist of broken promises. His heart was scarred.

RJ went back to his old life, but with a news perspective.

“I was scarred but not scared anymore. One thing I learned from that relationship was to accept my true self and sexuality,” he said.

One day, RJ found himself kneeling before the altar where Christ on the cross stood in the middle, illuminated by its only source of light, a Paschal candle.

The priest remembered how he prayed that pain and hatred leave his heart. The scars of his first agony were still there.

“That was right after college. It was also the day I realized the reason why my relationship with the man I loved ended up a failure,” he said.

Staring at the Paschal candle as it flickered in the cold afternoon breeze, the priest began to realize that his first love was not the man who broke his heart. It was Christ.

“I was in high school when I first joined the choir; I wanted to sing for Christ. In college, I joined the campus youth ministry and the Student Catholic Action,” the priest said.

“It was not clear to me back then how I wanted to serve Christ but I know I love, and am happy, serving Him,” he added.

He said that until that afternoon in Church, he wondered what he would do with his life. At the time, he had just finished his accountancy studies and was set to take the board exams.

He consulted his mother about his plan to enter the priesthood. “She said to me, ‘Why not work for a year, then decide if you really want to become a priest?’”

Exactly one year after that conversation, RJ reaffirmed his conviction. “[I made] a decision that will never be changed. I am going to be a priest.”

At age 32, RJ became a member of one of the major religious congregations in the Philippines.

The Church and homosexuality

According to Father John Harvey of the Oblates of St Francis de Sales, author of The Truth about Homosexuality: The Cry of the Faithful, “an individual who has not been able to get rid of the condition of homosexuality…the only way to fulfill the divine mandate of chastity is to practice sexual abstinence.”

Harvey explained that “sexual abstinence means precisely the avoidance of genital acts that leads up to orgasm.”

In his book, Harvey also stressed that sexual abstinence becomes “a form of love if the motive is the love of Jesus Christ.”

Sociologist Jayeel Serrano Cornelio, director of the Development Studies Program at the Jesuit-run Ateneo de Manila University, said gay priests, as in the case of RJ, are not unusual.

“A priest who is gay is not unusual. So many priests, I think, are like that,” Cornelio said.

He also that the Catholic teachings on homosexuality has not changed. “The Church always claims it condemns the sin but not the sinner.” 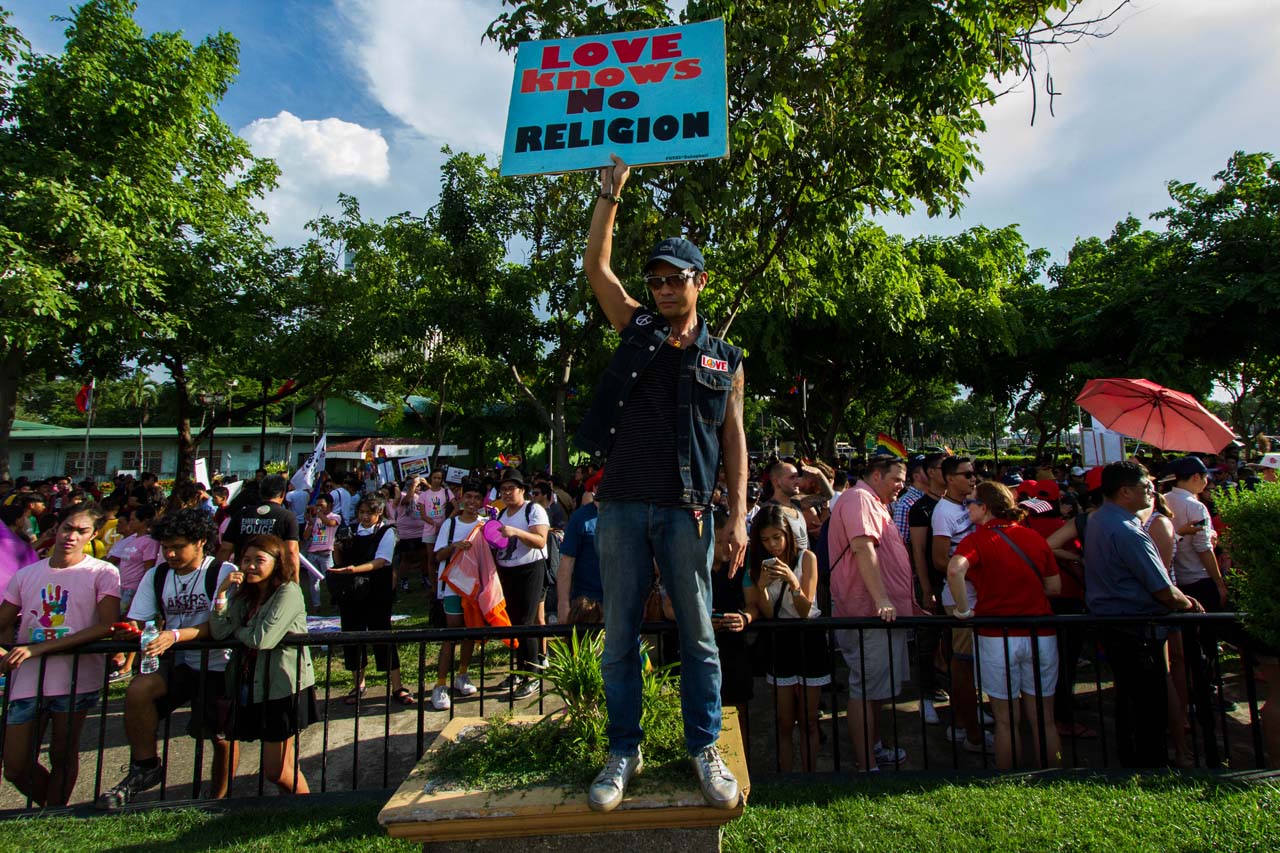 “It also means that the Church accepts homosexuals but disapproves the act of homosexuality which makes the sin,” Cornelio said.

“The Catholic theology doesn’t necessarily agree with homosexuality. The Catholic community accepts a person regardless of sexual orientation but there are conditions. One of the main conditions is the practice of sexual abstinence, which is not hard for Father ‘RJ’ because he is a priest,” he added.

Cornelio further explained that sexual abstinence is “hard to impose on gay people who are non-members of the clergy because they have no vows that will guide them to fight the urge.”

“For me, the bigger issue is whether many other Catholics still find it problematic. There are so many young people now who do not find it a problem at all. And maybe they are ‘freer’ because they are not priests,” said Cornelio.

He pointed out that tolerance remains limited in the Philippines and to be openly gay is still looked down upon.

Cornelio said one change that he hopes to see from the Catholic Church is “a stronger message of compassion and inclusion.”

Claretian priest Eduardo Apungan said the primary teaching of the Church, written or not, is it “recognizes and respects a person and his or her personality.”

“The issue of recognizing a person and the personality is not about gender. Christ told us to love creation. In the context of love, respect, and recognition, Christ excluded no one,” Apungan said.

However, just like any other institution or government, the Catholic Church has its own laws, a system of rules which it has to uphold.

“Based on the Church’s tradition and based on its Canon Law, there are limitations on whether a certain person of whatever gender can enter the priesthood and become a priest,” said Apungan, vice chair of the Association of Major Religious Superiors in the Philippines.

Based on the teachings of the Catholic Church, a priest is an ordained man, and bound by the law that governs the institution.

“That’s why priests cannot marry and to marry is a sin for priests because of the Canon Law which every priest has to obey. Otherwise, you will get out of priesthood,” Apungan said.

On Church teachings about the LGBT, he said, “The Church never said that a gay person shall be discriminated.”

Apungan added, however: “If a gay person wants to be a priest, the Church cannot accept him, technically, because of the law but it does not necessarily mean that the Church discriminates a person who has homosexual orientation.”

Instead, the Church will ask a gay person to enter a certain ministry that he or she could serve. 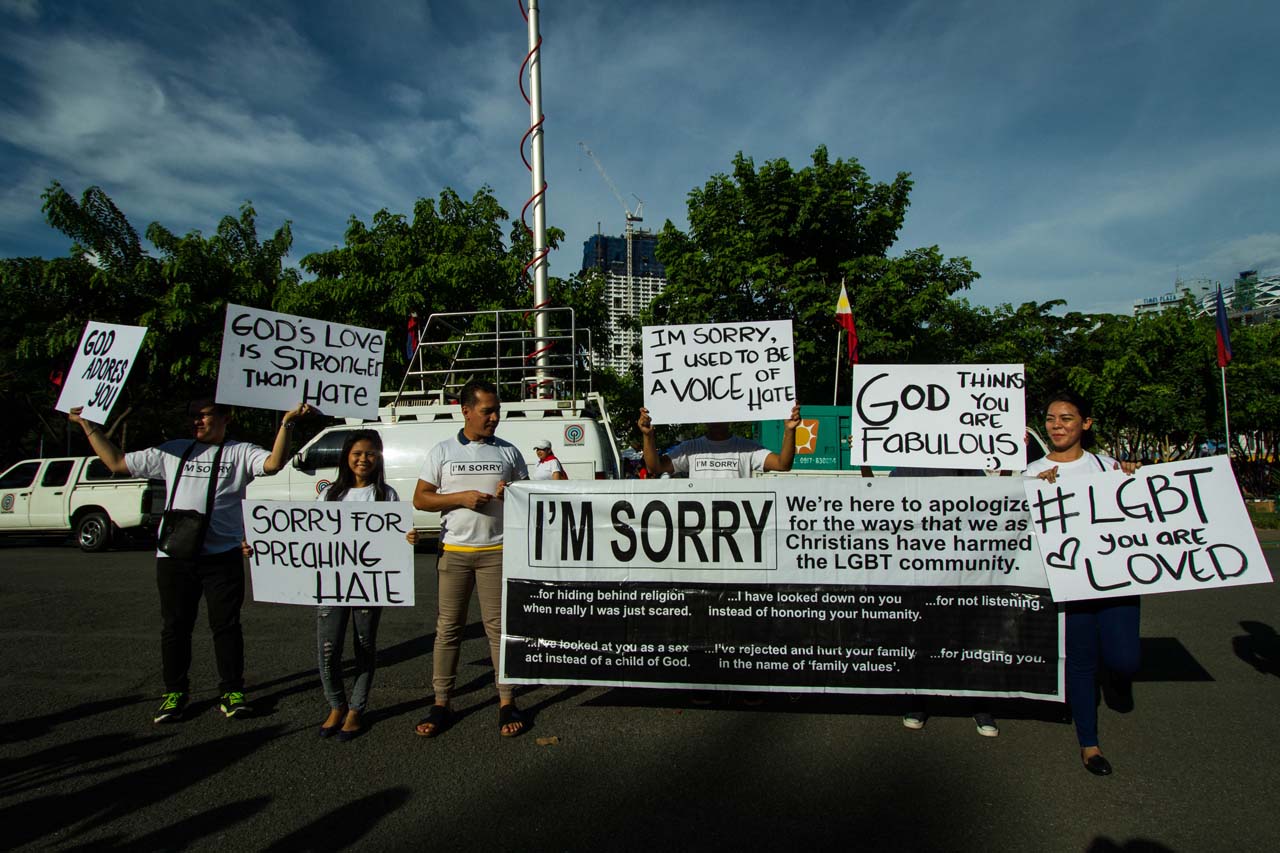 For a gay priest like RJ who entered the seminary without declaring he is gay,  Apungan said, “If a priest admits he is gay, the Church will not condemn him for telling the truth.”

“But the priest who confesses to be gay should not commit offenses which violates the law of the Church,” he added.

Just like priests who run for public office, the Church has to implement its rules.

“If a priest has confessed to be gay, he must remain faithful to his vow of chastity or celibacy, follow the law of the Church, and avoid acts unbecoming of a priest,” said Apungan.

Manila Auxiliary Bishop Broderick Pabillo backed  Apungan statements. “No gender is required in serving God but the Church must stand firm on its laws,” which molded the foundation of the Church and made it stronger for more than 2,000 years,” he said.

In the case of priests who are in a situation like RJ’s, the prelate said, “If he is gay and he is chaste, then there should be no problem.”

“I replied, ‘Apology accepted but there is nothing to say sorry’,” RJ said.

The priest said he never felt offended by the Order he is part of. “I never felt different and discriminated. I don’t know if they are aware that I am gay, but I believe, even if they do, they will not judge me,” he said.

RJ observed that “homosexuality is common within the organization of the priests.”

“We crack jokes about it. We talk serious matters concerning sexuality and there are a lot of priests who are vocal they are homosexuals,” he added.

He said there are members of the clergy who were still  “hiding inside the closet because of fear or confusion or guilt.”

Asked why he seemed confident and unafraid to admit he is gay, the priest replied: “Because I am keeping my promises. I remain chaste.”

“There is nothing to be afraid of because I have nothing to hide,” he added.

Then the priest recited Pope Francis’ statement – his favorite line of the pontiff: “If a person is gay and seeks the Lord and has good will, well who am I to judge?” – Rappler.com

*Not his real name