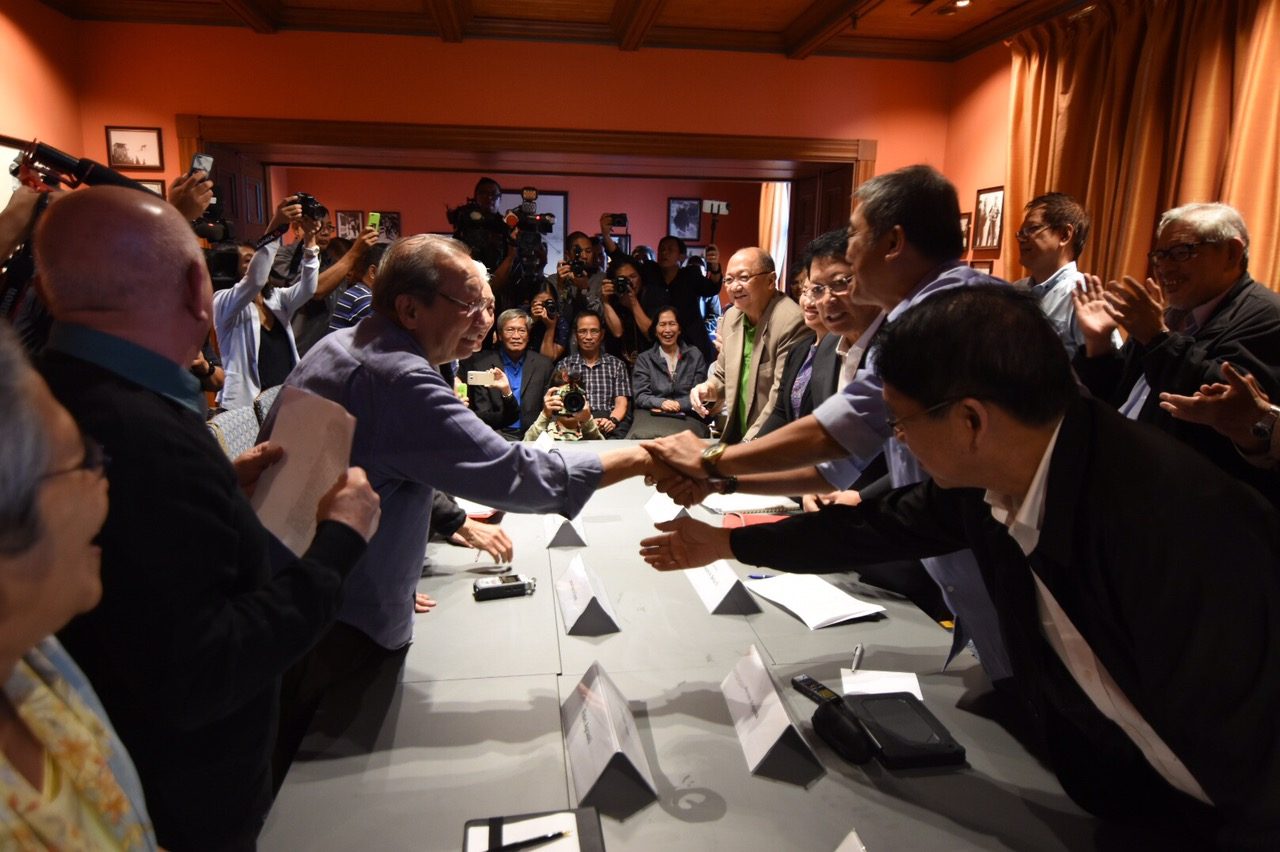 Facebook Twitter Copy URL
Copied
'We will recommend to the President the issuance of amnesty to all those prisoners and detainees as submitted by the National Democratic Front,' says the government chief negotiator

OSLO, Norway – The first round of talks between the Philippine government and the National Democratic Front of the Philippines (NDF) ended Thursday afternoon, August 25, with an agreement to seek amnesty for all prisoners.

“We will recommend to the President the issuance of amnesty to all those prisoners and detainees as submitted by the National Democratic Front (NDF),” said government chief negotiator Silvestre Bello III.

“We have agreed to study the amnesty of all political prisoners through a general declaration of President Duterte,” said NDF chief negotiator Luis Jalandoni.

The language was carefully drafted. Sources said the government panel refused to call them “political prisoners” and thus the phrase “NDF list.” Communist Party of the Philippines (CPP) founder Jose Maria Sison came up with the phrase.

“After a series of discussions and debates, we arrived at a very concise, precise statement of both panels on the issue of amnesty proclamation as well as the issue of ceasefire,” said Bello.

An amnesty for all political prisoners identified with the communist movement – estimated to be more than 500 – would be unprecedented. The last time this happened was after the 1986 EDSA People Power Revolution that toppled the Marcos dictatorship. Previous amnesty proclamations for prisoners after 1986 covered military rebels, Muslim guerrillas, and a handful of communist personalities.

An amnesty proclamation by the President would require congressional affirmation.

“We are happy with the result of the talks,” said Jalandoni.

They initialed the agreement on Thursday. A drafting committee composed of representatives from both camps will draft a joint statement that is expected to be approved Thursday evening (Manila time).

The signing ceremony is scheduled Friday morning, August 26, at 9 am in Oslo (3 pm in Manila).

Details have yet to be threshed out. The agreement that has yet to be made public does not specify the number of prisoners and detainees who would benefit from a successful amnesty application.

The NDF wanted some 50 old and sick prisoners to be prioritized for “humanitarian reasons.”

The NDF was categorical during the opening ceremonies that they want amnesty for all political prisoners as an incentive to the declaration of a prolonged ceasefire.

Both camps have agreed to keep indefinite unilateral ceasefires, pending agreements on the disposition of forces.

Aside from agreements on amnesty and ceasefire, the document will also include the reaffirmation of previously signed agreements, the reconstitution of the list of NDF consultants with immunitiy from arrest, and the fast-tracked timeline to complete the talks.

The government wants to complete the process within a year, as it looks forward to putting an end to Asia’s most stubborn insurgency that has claimed thousands of lives in 4 decades. – Rappler.com