MANILA, Philippines – Speaker Pantaleon Alvarez ordered legislators to return all number 8 protocol plates that were issued to them during the past 16th Congress and earlier.

In a memorandum issued by House Secretary General Cesar Pareja on Thursday, August 25, some cars bearing the said plate number were reportedly seen in “indecent places” or figured in crime-related activities.

On August 12, the National Bureau of Investigation (NBI) arrested 5 people who allegedly worked in a prostitution ring in Pasay City. The NBI found 4 vehicles with the number 8 protocol plate that were supposedly owned by sex den operators who were not present during the arrest.

“In view of this development, the Honorable Speaker has given instructions for the immediate recall of all protocol plates issued during the 16th Congress and earlier. Kindly turn in these car plates to the Office of the Secretary General for proper acknowledgement,” said the memorandum dated August 24.

Rappler obtained a copy of the memorandum from Navotas Representative Toby Tiangco on Thursday. 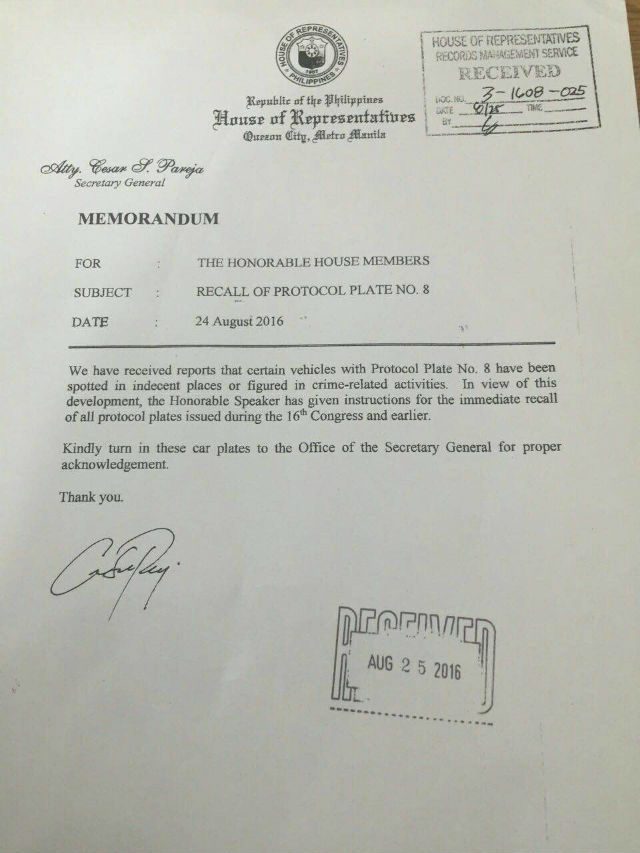 Tiangco, however, wants the memorandum to also cover the plates issued during the 17th Congress.

Prior the memorandum’s release, the lawmaker filed House Bill Number 413 prohibiting the issuance of the number 8 protocol plate to congressmen.

In his explanatory note, Tiangco said protocol plates are prone to abuse.

“Public office is a public trust and no legitimate reason exists for above ranking government officials, particularly members of the House of Representatives, to be accorded this privilege that has become prone to abuse and misuse,” said Tiangco.

“As lawmakers, members of the House of Representatives should set a good example by passing a law that will curtail a privilege presently granted to them and that would put them on equal status with other vehicles on the road,” he added. – Rappler.com