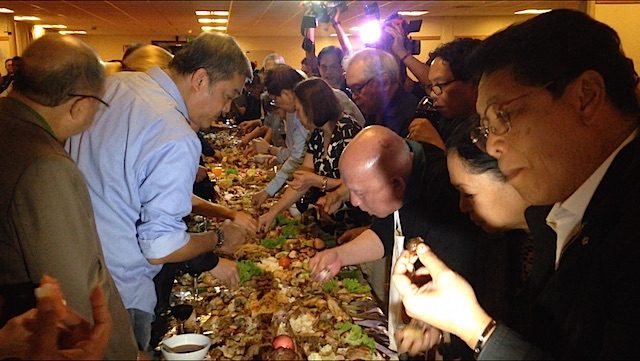 OSLO, Norway – The Filipino community in Oslo prepared a boodle fight dinner on Thursday, August 25, for the negotiating teams of the Philippine government and the communist National Democratic Front of the Philippines (NDF).

It is a military style of eating, where diners go around a long table filled with food that is served on banana leaves. One has to eat with bare hands.

The negotiating panels celebrated a week of talks, where both camps made headway in the process that is meant to end Asia’s longest running insurgency.

The Communist Party of the Philippines (CPP) agreed to declare an indefinite ceasefire, while the government panel agreed to recommend to President Rodrigo Duterte the amnesty of all political prisoners, subject to the approval of Congress.

Watch the videos below: