‘Ultimate sacrifice’: The 15 soldiers killed in clashes vs Abu Sayyaf 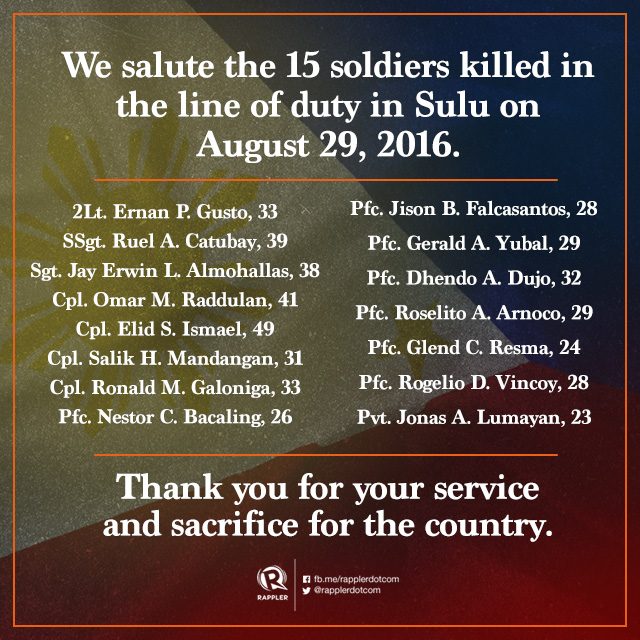 Facebook Twitter Copy URL
Copied
'Much as every soldier, sailor, marine, or airman knows that laying down one's life is all part and parcel of their job, we in the AFP vow to pursue this battle to conclusion'

MANILA, Philippines – Fifteen Army soldiers died on Monday, August 29, during a series of clashes against members of the Abu Sayyaf Group (ASG) in Patikul, Sulu.

According to the Armed Forces of the Philippines (AFP), soldiers from the 21st and 35th infantry battalions encountered at least 120 heavily armed members of the ASG in Barangay Maligay in Patikul town at around 4:30 pm.

Ten other soldiers were wounded during the encounter, part of the military’s efforts to eliminate the ASG.

“As we gaze at the national flag that flies at half-mast anew, soldiers knew that one too many hero among them has again offered his life – that others may live,” AFP Chief of Staff General Ricardo Visaya said of the 15.

He added: “Much as every soldier, sailor, marine, or airman knows that laying down one’s life is all part and parcel of their job, we in the AFP vow to pursue this battle to conclusion.”

President Rodrigo Duterte had earlier ordered the AFP to “destroy” the ASG, following reports that the group had beheaded another of its hostages. Earlier in April and June, the kidnappers beheaded two Canadian hostages.

The Abu Sayyaf, whose leaders have pledged allegiance to ISIS, is behind the spate of kidnappings in Western Mindanao in the last two decades.  The group is believed to be holding a Norweigan, a Dutch bird-watcher, and 4 Filipinos, seized in separate raids.

“My orders to the police and armed forces against enemies of the state: seek them out in their lairs and destroy them… The Abu Sayyaf, destroy them, period,” Duterte said.

Visaya said the military will not stop “until we rid our country of the menace this ASG brings to the world.” The AFP general ordered field commanders to “keep the pressure on the enemy until they wear out.”

“Just ensure they won’t be able to leave the island and we will be triumphant in the end,” he said. – Rappler.com