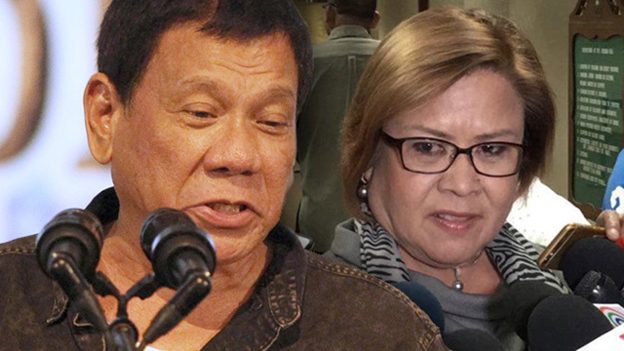 This is how Senator Leila de Lima described the  Duterte administration’s seeming disregard of the rule of law in its fight against illegal drugs.

De Lima has long criticized the Philippine National Police for the spate of drug-related killings, which have breached the 2,000-mark as the administration entered its third month in office. On Thursday night, she slammed the PNP for its door-to-door campaign inside gated communities, without any search warrant.

(They are asking subdivision associations to allow PNP access to the gated communities of the more affluent among our people. The police will now knock on your houses and if you don’t welcome them, they will just include you in their list. Like what they did to me, they included my name in their so-called drug matrix)

For the President’s fiercest critic, it is martial law even without the formal declaration.

The intensified war on drugs, she said, opens the country’s doors to becoming a “police state,” in which the government can easily search private communications and properties without a court order. (READ: Village ‘TokHang’: Disadvantage to say no to cops – NCRPO chiefs)

“I can only characterize such a situation as martial law without the formal declaration,” De Lima said.

“Precisely in the name of this war on drugs, we are slowly but surely inching our way to the actual realities of a police state, where the government can look into your private affairs and visit you in your homes, even without any probable cause, without any search warrant, without any report or complaint against you or anyone of you in your households,” she said.

Rise of a new dictator?

It then came as no surprise to the senator that Duterte is insisting on burying the late strongman Ferdinand Marcos at the Libingan ng mga Bayani despite the public outcry against it, especially among victims of human rights abuses during the Marcos regime.

It’s a move meant to make the sins of the past acceptable to the present generation, she said, to usher in a new dictator.

(Maybe that is the why he is insisting on burying Marcos at the Libingan ng mga Bayani, so we could forget the history of dictatorship and martial law, and so that the form of government that we have already ended in EDSA in February of 1986 would again be acceptable among Filipinos.)

Duterte earlier said the hero’s burial of Marcos would heal the wounds of the nation that was subjected to torture, killings, and corruption during the 14-year martial rule. (READ: #AnimatED: Marcos, Duterte and burying our history)

De Lima denounced this, saying it only aims to condition the minds of people to forget the fight against Martial Law and to pave the way for a new dictatorship.

(In burying Marcos in the hero’s cemetery, the government wants to bury as well the memories of our fight against the abuses of power of a dictator. The burial of these memories is also the burial of our capability to once again fight another looming dictatorship.)

De Lima earlier filed a case before the Supreme Court seeking to halt the planned hero’s burial of the former president. There are several other petitions for the same purpose.

“What we are witnessing is the disempowerment of the people. Slowly but surely, civil society is being separated from political power, whether through our own fault of surrendering our rights to the vision of a strongman and trusting that he can do no wrong, or out of fear, hoping that the repression does not reach our doorsteps and that we do not become another victim of the war on drugs,” she said.

Duterte, for his part, denied he would be the next Marcos, saying it would dishonor his late mother, who was a member of the anti-Marcos movement in Davao City. – Rappler.com