Facebook Twitter Copy URL
Copied
The Armed Forces of the Philippines also assures the public: 'There will be no independent military operations to be conducted. We will always be in tandem with the PNP.'

MANILA, Philippines – The Philippine National Police (PNP) in Metro Manila has been on full alert since midnight of Saturday, September 3 – hours after the deadly blast at the Roxas Night Market in Davao City.

(Before, if only 60% of our troops go out, now we see to it that 90% of our troops are going on patrols, and only 10% stay in offices. That’s what has changed. You will see a bit more police forces going around, especially in malls, in centers, in the LRTs and MRT.)

NCRPO officials were in a meeting with the Armed Forces of the Philippines’ (AFP) Joint Task Force-National Capital Region (JTF-NCR) on Saturday to consolidate all intelligence in the wake of the Davao blast.

The AFP has decided to augment the police’s visibility patrols and checkpoints in Metro Manila with its armed forces. (READ: After Davao bombing, AFP on heightened alert in Metro)

(Like in the past elections, we have intensified security in our checkpoints. We’ve placed checkpoints in strategic places again.) 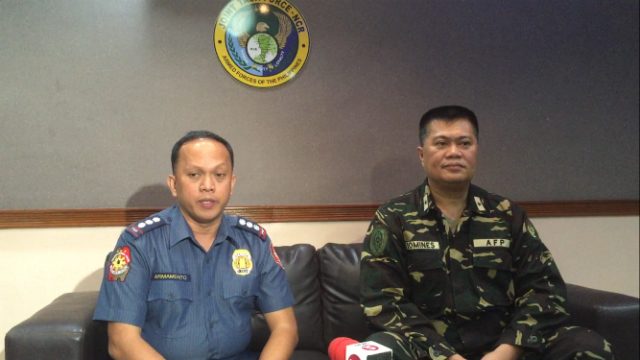 The NCRPO has also put the police on forward deployment in public places of convergence to increase and enhance police visibility.

After the deadly explosion on Friday night, September 2, President Rodrigo Duterte on Saturday declared a “state of lawlessness” in the country.  (For updates on the Davao blast, check Rappler’s live blog)

It simply means more soldiers and policemen will now be deployed, government will set up more checkpoints, and impose, if needed, curfew in certain areas. It is the mildest of the 3 commander-in-chief powers of the President granted by the Constitution.

Brigadier General Roberto Domines, commander of the JTF-NCR, said that with the declaration of a “state of lawlessness,” the AFP is now empowered to augment the PNP in its security operations.

“There will be no independent military operations to be conducted. We will always be in tandem with the PNP,” Domines said in a mix of English and Filipino.

On the Abu Sayyaf Group (ASG) claiming responsibility for the blast, Domines said: “What else is new? ‘Yun naman palaging ginagawa nila (They always do that), so all we have to do is enhance our operations and be prepared for anything.”

He again urged people not to panic, assuring them “they will feel [more] secure with the increased number of AFP and PNP personnel in the streets.”

As of Saturday evening, 14 have been reported killed – 10 of them died in the blast site, while 4 died in the hospital. Of the more than 60 wounded, 15 underwent surgery while 3 have been discharged, Dr Leonardo de Vega, chief of the Southern Philippines Medical Center (SPMC) hospital, said.

“Tiny shrapnels” were found in the victims’ bodies, according to him. “Most of them sustained massive shrapnel injuries in the liver and 15 were operated on.” – Rappler.com