War on drugs: When the police come knocking in posh Makati villages MANILA, Philippines – President Rodrigo Duterte’s war on drugs has reached Makati’s wealthiest, but the scene is a sharp contrast from operations held along the dark alleys of poorer communities.

Oplan TokHang is the PNP’s strategy of literally knocking on the doors of suspected drug users and pushers to give them a chance to change their ways. “TokHang” is a contraction of the Visayan words “toktok” (knock) and “hangyo” (request).

At most, the police could only hold an information dissemination campaign, which the SPD chief dubbed as a “reinvigorated” Oplan TokHang. The homeowners associations of Makati’s 6 exclusive villages, meanwhile, called it “Kapit Bisig Kontra Droga.”

The caretaker was given two flyers. The first was a 4-page pamphlet containing information about the negative effects of illegal drugs as well as the contact details of the SPD.

The second flyer, just 1/4 of a bond paper, reads: “Kung ikaw ay may kamag-anak, anak, kapatid, o kaibigan na gumagamit ng ipinagbabawal na gamot, kami po ang kakatok at kakausap.” (If you have a relative, child, sibling, or friend who is using illegal drugs, we will be the one to knock and talk to him or her.)

In most houses, household servants greeted the authorities. They promised to pass the message on to their employers, who were either not at home or who refused to face the cameras.

In Magallanes Village, a female homeowner opened the gate herself, but immediately told the police: “I’m not a drug user!”

The police officer assured her that she is not being suspected of drug use, and then briefly discussed President Rodrigo Duterte’s ongoing war against drugs.

“Oh yes, I support the drug campaign of Duterte,” said the homeowner, thanking the police before closing her gate. 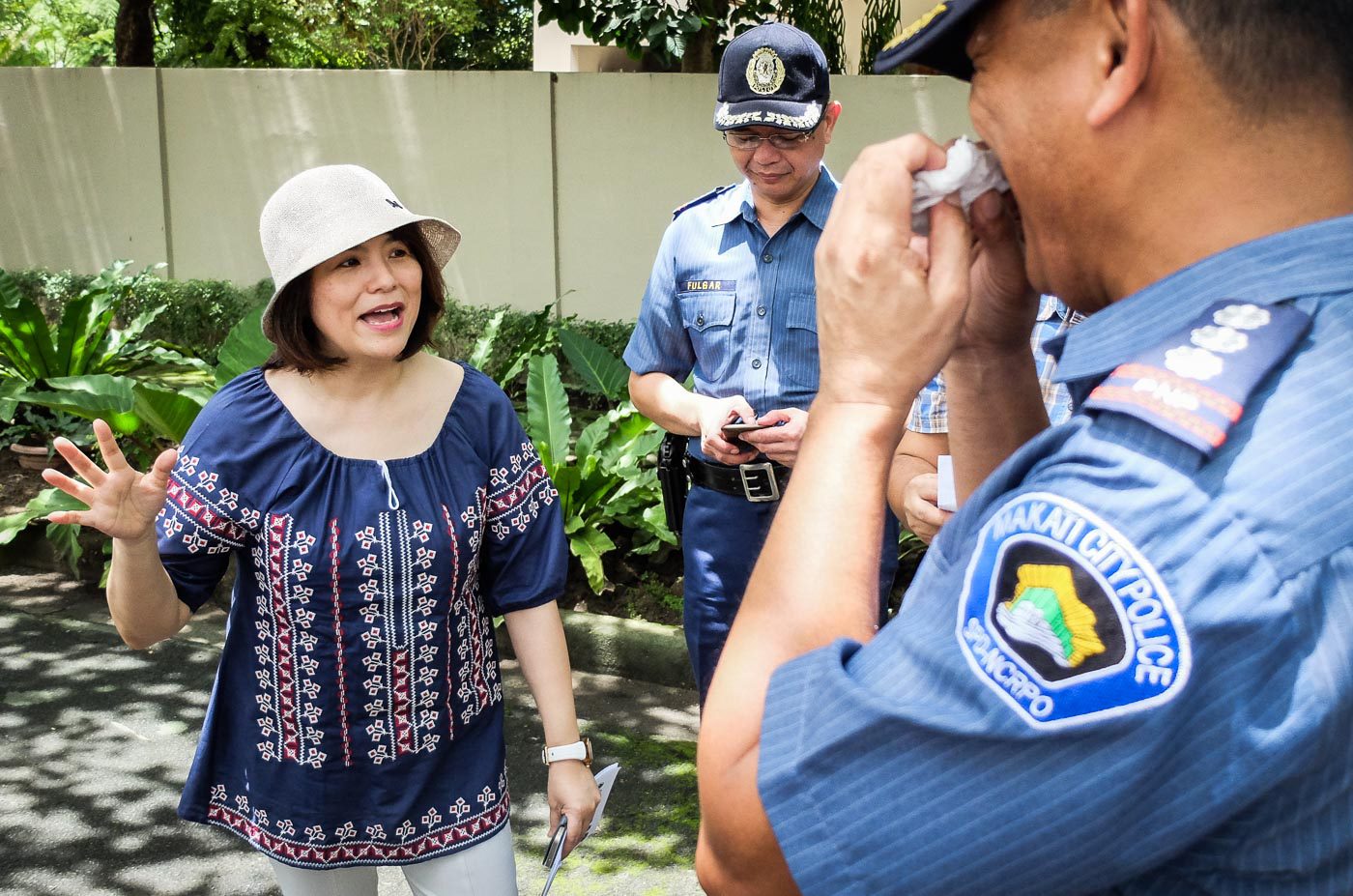 On Monday, the PNP SPD visited more than 50 houses in Magallanes Village and Forbes Park combined. Three weeks before that, the police step foot inside Urdaneta and San Lorenzo villages. (On Thursday, September 8, they were set to visit Dasmariñas Village.)

But access was not easy, as the police had to first secure permission from the barangay and the homeowners associations before they could enter the subdivisions that are home to some of the Philippines’ richest and most influential.

Apolinario denied the PNP is giving the subdivision residents any special treatment on the war on drugs, which has been criticized as anti-poor due to the spate of drug-suspect killings in depressed areas. (READ: War on drugs: While you were sleeping) 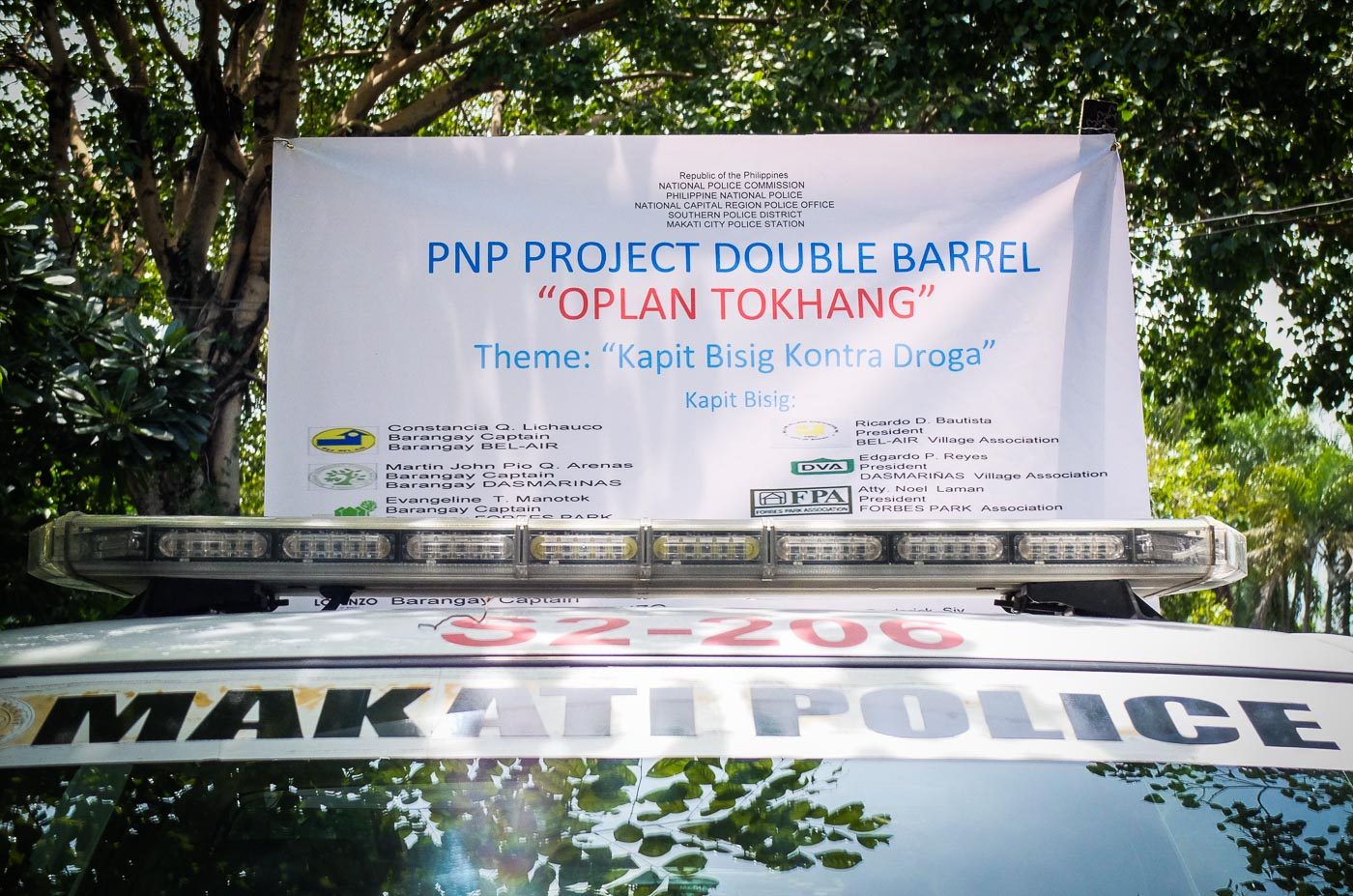 On a national scale, the PNP has conducted 679,122 Oplan TokHang operations, leading to a total of 685,740 surrendering as of September 4.

Another 1,011 drug personalities have been killed and 14,798 drug suspects have been arrested in 15,626 police ooperations. (WATCH: War on drugs: ‘Nanlaban’)

In Makati, 198 drug suspects are in the police’s watch list as of September 5, but none reside in the exclusive villages. The same goes for the 1,289 drug personalities who surrendered and the 108 drug suspects arrested in the city so far.

Asked why the police had to be the one conducting the information dissemination campaign inside Makati’s posh villages, Apolinario replied: “It means that through the homeowners, meron kaming access sa area na ito (we have access to these areas).” – Rappler.com