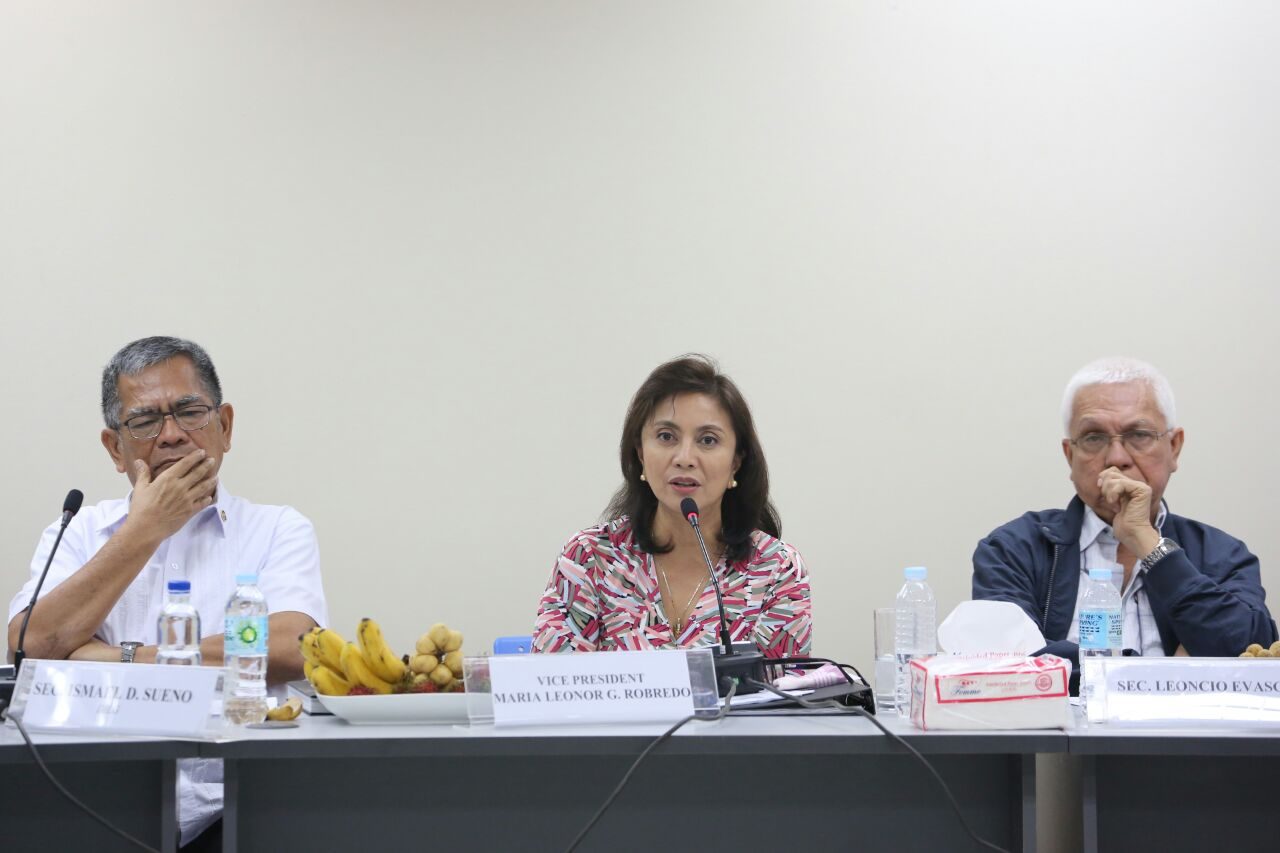 Facebook Twitter Copy URL
Copied
In Naga City, the families are integrated in the campaign against drugs while the church is a strong partner in Catanduanes. These have been factors of success.

MANILA, Philippines – Vice President Leni Robredo said on Tuesday, September 6, that the participation of the family and the church was key in the success of drug rehabilitation programs.

Specifically, she said, Naga City drug dependents were a beneficiary of a drug rehabilitation program initiated by her husband, the late interior secretary Jesse Robredo who served as long-time mayor of Naga City.

The Vice President met with representatives from different government agencies for a briefing on the status of a national drug rehabilitation program.

“What we did [was] to organize the family. Mothers against drug abuse (MADA), that’s very active. MADA is the parallel of BADAC. The drug dependents who surrender are rehabilitated under the program,” said Robredo in a mix of English and Filipino.

BADAC or the Barangay Anti-Drug Abuse Councils is a movement in each barangay that monitors the anti-drugs campaign. It was created by the Department of the Interior and Local Government (DILG) via Memorandum Circular 2015-63. (READ: Communities, private sector help is key in nationwide rehab program)

Robredo also said that in Catanduanes, the church has been a primary partner in drug rehabilitation, noting that a faith-based approach has been effective for the province.

“We approach [drug rehabilitation] with the acceptance that it is not easy to achieve [and that] it really has to be an entire affair [of the] community,” she said.

The Office of the Vice President will join a council consisting of different government agencies that are tasked to craft a comprehensive drug rehabilitation program.

Among those who attended the meeting are DILG Secretary Ismael Sueno and Executive Secretary Leoncio Evasco Jr, who heads the anti-poverty cluster of the Office of the President.

DILG will head the council, which will be composed of the Departments of Health, Education, Social Welfare and Development, and Environment and Natural Resources, the Dangerous Drugs Board, and the Philippine National Police, among others.

Being a community-based approach, it will also call for the participation of the church, civil society organizations, and non-governmental organizations.

During the briefing, DILG Undersecretary John Castriciones noted that of the 700,000 drug surrenderees, only 1% or 10,000 should be turned over to rehabilitation centers. A very small portion of the number must be brought to mental institutions.

The biggest bulk of those who turned themselves in, Castriciones said, must be integrated into community-based programs.

For instance, he said: “They will have to participate in the [environment department’s] greening program [or be involved] in livestock raising… We will also expose them to alternative learning systems by the education department and TESDA courses.”

“These will let them be productive while on the process of detoxification,” he added.

Other interventions of the program will also include counseling and spiritual uplifting, medical assistance, and provision of livelihood and scholarships.

According to DILG Assistant Secretary Roosque Calacat, the program is set to be launched by this month.

But while preparations are still ongoing, Robredo offered the resources of her office to jumpstart the program in pilot areas since time is a luxury – given the volume of those who surrendered and who are in danger of a relapse. (READ: War on drugs: Rehabilitation must be more than a knee-jerk reaction)

“For example, the OVP can help in starting the project in 5 areas while you are still polishing the process,” she said. “We will sponsor pilot areas to inspire the others.” – Rappler.com