Apr 25, 2017 2:01 PM PHT
Lian Buan
Facebook Twitter Copy URL
Copied
(3RD UPDATE) The High Court says it 'found that there is no law that prohibits the construction of the challenged Torre de Manila' 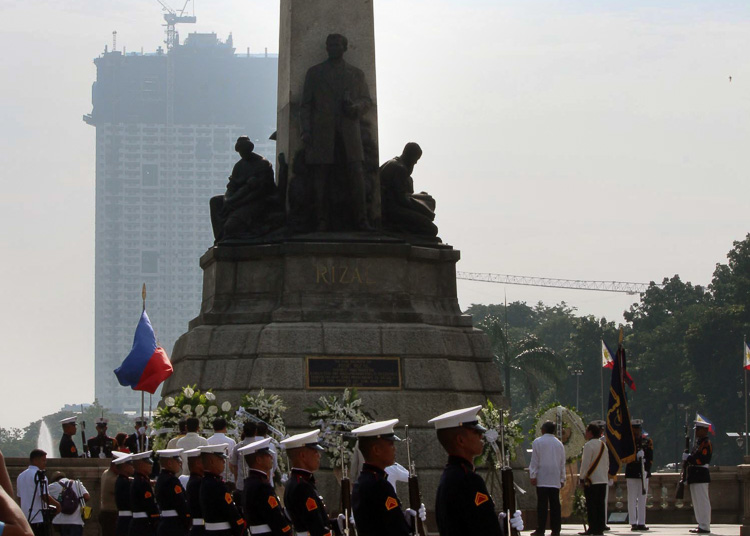 SC spokesperson Theodore Te announced the decision at the High Court compound in Baguio City where the justices hold their annual summer sessions.

Senior Associate Justice Antonio Carpio is the ponente of the Court decision to lift its 2015 temporary restraining order on the construction in June 2015 while it heard oral arguments on the Knights of Rizal petition filed in September 2014.

“The Court, voting 9-6, dismissed the petition mandamus for the reasons that: (1) Court has no jurisdiction over the subject matter; (2) the petitioners have no standing to sue; and (3) they stand to suffer injury. Furthermore, the Court also found that there is no law that prohibits the construction of the challenged Torre de Manila. As a consequence of the judgment rendered today, the TRO issued by the Court is lifted,” Te said.

The Knights of Rizal said the 49-story residential project should be demolished because it ruins the sightline or view of the historic Rizal Monument and it allegedly violates zoning laws in the city of Manila.

Torre de Manila developer DMCI Homes argued that the building sits on private property and was given clearances by city officials.

In a statement following the ruling, the Knights of Rizal said it respects the decision. “We thank the public for carrying this issue with us and for making the same as a test case for Philippine Heritage for whatever the  outcome would have been,” it added.

In a statement, DMCI Homes president Alfredo Austria thanked the High Court and said, “The waiting game is over and we can now service the needs of our customers.”

Manila city’s planning and development officer, Resty Rebong, approved the zoning permit for Torre de Manila in June 2012, granting DMCI what is called a “variance” or exemption to the zoning rules.

It was later revealed during the SC oral arguments that when the variance was granted, DMCI had not even applied for it yet. The Manila Zoning Board of Adjustments and Appeals (MZBAA) only approved it in 2014.

DMCI appealed to the High Court and requested that the TRO be lifted “to allow the construction of the condominium pending judgment on the merits of the case.”

It added it would lose around P4.27 billion in capital investments and unrealized profits if the SC orders the demolition of the unfinished condominium (READ: TIMELINE: The Torre de Manila case)

The property developer also reiterated that the petition of the Knights of Rizal is “high on political drama but short on the facts and the law.”

DMCI argued that there’s no law saying the sightline of national monuments must be protected. SC Associate Justice Francis Jardeleza, however, called for a less restrictive interpretation during the oral arguments.

Jardeleza also said the rule of law was not followed when the Manila government granted permits for the construction of the condominium.

But Jardeleza also told the Knights of Rizal that guidelines of the National Historical Commission of the Philippines (NHCP), which the group cited, have no legal weight.

The NHCP itself acknowledged this in a November 2012 letter to DMCI, noting that Torre de Manila sits outside the boundaries of the protected Rizal Park.

During the 5th round of oral arguments, however, then solicitor seneral Florin Hilbay contradicted the position of the NHCP. Hilbay said the physical integrity of the Rizal Monument should necessarily include its sightline.

The NHCP, for its part, said during the 6th and final round of oral arguments that the Manila government should enact local ordinances to protect the Rizal Monument.

“Local legislation is needed because national monuments vary in size, height. It is the local government which can best determine the appropriate height [of buildings] and designate views and sightlines that should be protected,” said NHCP counsel Jose Manuel Diokno.

Critics have tagged the Torre de Manila as the “national photobomber” as it is in the background of important national events such as Rizal Day held at the national hero’s shrine, and during the wreathlaying ceremonies of state guests. (READ: Torre de Manila photobombs APEC leader’s tribute in Luneta) – Rappler.com