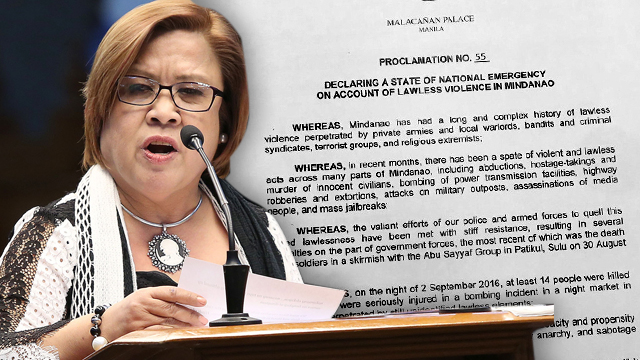 MANILA, Philippines – Two of the guidelines released by Malacañang on the implementation of the state of national emergency declared by President Rodrigo Duterte are “prone to abuses,” the chair of the Senate committee on justice and human rights said on Thursday, September 8.

Under the law, and as also espoused in the Palace guidelines, warrantless arrests are allowed when:

The “problematic” part, De Lima said, is the additional line allowing warrantless arrest “when the person arrested, or to be arrested, has voluntarily waived his right” against it.

For the former justice chief and chairperson of the Commission on Human Rights, voluntary surrender happens when there is already a warrant of arrest – contradictory to the guidelines released by the Palace.

“My point here is there may be some legal rationale for this and may be referred to this concept of voluntary surrender pero iba pong kontekso ang voluntary surrender na alam ko. Kung ‘di nila malinawan o ilinaw ito (but the voluntary surrender that I know of has a different context. If they won’t clarify this or make this clearer), I’m afraid this is going to be prone to abuse,” De Lima told reporters.

(As far as I know, if you say voluntary surrender, in most cases there is already a warrant of arrest. Warrantless arrest is a different matter.)

She then questioned how to truly know if those who waived their rights had indeed done so voluntarily. De Lima said it is easy for authorities to “force” suspects to give up their rights.

(How would we know if the arrested person who is not covered by the 3 recognized instances of warrantless arrest indeed truly waived his rights? Of course when you are arrested, can you still refuse it?)

De Lima maintained that a suspect could not waive his or her own rights without fully knowing well what he or she is getting into, and without the presence of a lawyer.

Questioning the addition of the last line, De Lima said the law only allows 6 conditions in implementing warrantless searches and seizures, which are also contained in the Palace list:

Case before the SC?

With all these concerns, the senator – deemed the fiercest critic of the President – said she is expecting that the declaration would be questioned before the Supreme Court.

While saying she has no personal knowledge on any planned attempts, the senator said she would not be “surprised” if there are human rights advocates who would file a case against it.

(I’m not personally aware of any plans to file a case but I won’t be surprised if some will question the declaration, especially human rights advocates.)

De Lima, however, said the SC may still uphold the declaration if only based on its prior decision to uphold President Gloria Macapagal-Arroyo’s declaration of a state of emergency in Maguindanao and Sultan Kudarat provinces, and in Cotabato City, after the 2009 Maguindanao massacre.

The Court had also upheld Presidential Proclamation 1017,  Arroyo’s declaration of a state of national emergency in 2006, following a coup attempt against her. – Rappler.com