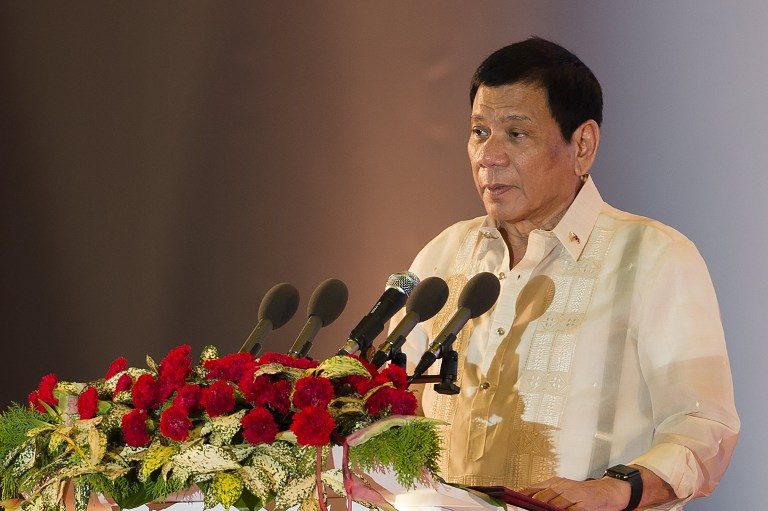 Facebook Twitter Copy URL
Copied
(UPDATED) Before leaders of East Asia, Philippine President Rodrigo Duterte recounts the 'atrocities' against the ethnic people in Mindanao, a tirade directed towards the US government

In his speech, Duterte recounted the “atrocities” against the ethnic people in Mindanao, the Philippines’ poorest island group that has suffered decades of conflict.

The Philippine Department of Foreign Affairs said, “In the passionate intervention of President Duterte, he underscored the need to take a long historical view of human rights, mindful of the atrocities against the ethnic people of Mindanao.”

“Even as we continue to comply with our constitutional requirements in the observance of due process and respect for human rights, he is committed to combating the spread of illegal drugs to ensure the security and well being of the next generation,” the DFA added.

Duterte was attending the Association of Southeast Asian Nations (ASEAN) Summit in Vientiane, Laos, when he delivered this speech.

Later, a report from Agence France-Presse quoted 3 diplomats as saying that Duterte spoke about the “atrocities” of the US military in Mindanao when the Philippines was still a US colony – a detail left out in the DFA sentence. (READ: Obama, Duterte clash over brutal crime war)

US President Barack Obama was among the 18 leaders present at the East Asia Summit. A delegate described the atmosphere in the room as “quiet and shocked.”

In Indonesia, where Duterte headed on Thursday night for a state visit to begin on Friday, Foreign Secretary Perfecto Yasay Jr confirmed that Duterte showed photos of alleged human rights atrocities in Mindanao during his turn at the East Asia Summit.

He denied reports that the atmosphere grew tense when Duterte did this.

On Thursday, Duterte – through his spokesmen –  expressed regrets over his “strong comments” against  Obama and the US over a similar tirade.

Duterte has been criticized by the United States and the United Nations over the recent killings in the Philippines.

This comes as Duterte’s war on drugs has killed more than 3,000 people in the Philippines.

Of this number, around 1,890 had been declared killed in police operations while an almost equal number – around 1,400 – were victims of extrajudicial killings. (READ: Duterte pushes for ‘drug-free ASEAN’)

US President Barack Obama himself urged Duterte on Thursday to wage his crime war “the right way.” – Rappler.com