MANILA, Philippines – When court room, Congress and reality TV come together, a beast of a language is born. The verbal sparring of legal luminaries, seasoned litigators, trial amateurs, and movie stars-turned-senator-judges has produced an exchange that is often fascinating, sometimes frustrating, and truly a class of its own.

Lead defense counsel Serafin Cuevas may move that it be stricken off the record but as Sen Francis Pangilinan says, “What we say here will be quoted in the future.”

Why wait for the future? It is the pleasure of this gentle lady from Rappler to submit to the impeachment court records of its speech for the kind indulgence and guidance of our honorable readers.

In reading this lexicon, I manifest that we fix our microphones and properly enunciate our vowels and consonants to avoid being admonished by the chair with a hearing aid.

Your honors, I present lingua Corona (not Cuh-rowna, Giovanni Ng!):

From the Miriam Defensor Santiago Dictionary of Law:

– Seen and heard: As spoken to private prosecutor Arthur Lim, “This is the end of this colloquy, how dare you raise questions to my authority?!”

– Seen and heard: “Kaya tayo tumatagal kasi may oration pa eh. ‘Wag niyo kami i-orate dito. This is not a school of oratorical skills. This is a school of logic and experience!” (The reason why we’re taking long is because of the oration. Don’t orate before us.)

– at first view, on the first appearance; legally sufficient evidence to establish a fact or a case unless disproved 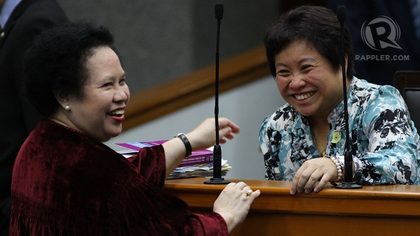 From the Defense and Prosecution Panels

– Seen and heard: Too many to mention

Tupas: Our request, your honor, is for the honorable tribunal to be liberal in the asking of questions.

Enrile: Are you suggesting that we should allow hearsay evidence?

Enrile: Are you suggesting that we allow argumentative questions?

Tupas: We are not suggesting that, Mr President.

Enrile: Are you suggesting that we should allow hypothetical questions?

Tupas: No, your honor.

Enrile: Are you suggesting that we should allow leading questions teaching the witness what to say?

Tupas: That’s not the suggestion of this representation. It’s just giving flexibility to the prosecution.

Enrile: The chair is open to any suggestion, how flexible you want the chair to be.

Tupas: I’ll submit to the wisdom of this honorable tribunal.

– Seen and heard: Enrile tells defense and prosecution lawyers standing around witness Pascual Garcia III, PSBank president: “Why are you crowding? What is so important about those documents? The court will like to see the witness.”

– Seen and heard: Only CCTV can tell

– when prosecutor Rep Rodolfo Fariñas takes the floor, and lengthily and passionately argues on anything under the sun

– the time when Fariñas’ thoughts shift from English to Ilocano to Filipino, aka lost in translation

Sen. Vicente Sotto III: I move that we terminate the privilege hour and proceed with the trial.

From the Honorable senator-judges

– according to senators and defense counsels, a rule that the prosecution misunderstands as presenting its best evidence in press conferences

Enrile to Lim: There is the best evidence rule. What is the purpose of reading the contents of the documents? For propaganda?!

– Seen and heard: Sen. Francis Escudero jokes, “Ang dami na naming trabaho bilang senator-judge. Dito na lang kami nakakabawi-bawi. Magsulat naman sila ng legal memorandum.” (As senator-judges, we already have a lot of work to do. This is the only chance for us to get even. They should be writing legal memoranda.)

– break time in Senate terms, used by Enrile to “do something”

– Seen and heard: Sotto says, “I move that the trial be suspended for 15 Senate minutes.”

n. “The product of my own mind”

– Seen and heard: Tupas asks Enrile about the basis for his explanation that the trial is akin to a criminal case. Enrile replies, “This is the product of my own mind.” – an expression of frustration

– Seen and heard: Sen Joker Arroyo asks his fellow senators not to cite Garcia in contempt for refusing to disclose the dollar accounts. He says, “If you’re in a hurry [to crucify this witness], I give up.”

– the letter that seems to appear on the leaked dollar accounts of Corona, possibly referring to “thousand” as in $700K

– meaning still unknown, with Garcia refusing to discuss it – a dramatic phrase spoken when taking responsibility for a group

– Seen and heard: Pascual, on refusing to disclose the Corona dollar accounts: “I am the leader of the bank. I do not want any one of our employees exposed to this particular liability. If there is any liability at all, let it be me.” Watch here:

Let me put on record, your honors, these words you used, quoted and invented in the first 4 weeks of trial. The colorful language provides for sure, afternoon to primetime entertainment.

Beyond the laughter and soundbites, though, the representations that put you in office move that these proceedings… well, move. It is our pleasure that the trial also amount to substance, and a speedy and just outcome. Anything less will be a high crime, an impeachable offense.

In your words then, “Let us proceed. So ordered.” – Rappler.com