“Some senator-judges have taken on the role of prosecutors, and have converted what should be an adversary proceeding, to nothing more than an inquisition,” he said during a speech before classmates, alumni, faculty and students of the Ateneo Law School who came together for a re-dedication of the Justitia auditorium which was refurbished by batch ’85 of the Law school.

Corona’s painted portrait was also installed and unveiled, in addition to those of other chief justices who are alumni of the Law School.

Corona also said, in apparent reaction to Thursday’s issuance of subpoenas for his BPI peso bank accounts, “I can no longer count how many of my constitutional rights have been blatantly and grossly violated.” He also said, “I have always tried to be a man of the law. Despite the pain and the difficulties, I readily submitted myself to the constitutional process, to prove one point: That fear has no place in a magistrate’s heart.”

He again took a swipe at Malacañang, saying that “this whole sordid affair has all been about politics from beginning to end. It is about Hacienda Luisita, the P10-B compensation which the President’s family reportedly wants for the land…The need to terrorize and instill a chilling effect on the justices of the Supreme Court, to be able to bend their decisions in favor of the Malacañang tenant.”

He warned that recent events show “we are teetering towards one-man rule, where the rule of law is undermined and the system of government, particularly the principal mechanism of checks and balances is being destroyed.”

Corona’s defense team – with the exception of lead counsel Serafin Cuevas and Joel Bodegon – was present during the affair. 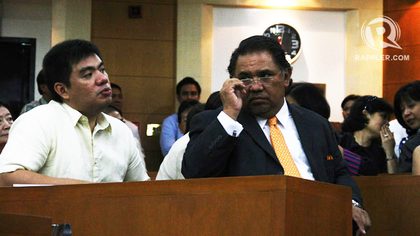 Before his offensive, Corona acknowledged the role that his wife has played in his life.

“I’m lucky to have her, my loving and understanding wife, who was, from the very beginning, the wind beneath my wings, and whose dedication to me, has never wavered all these 45 years.” Married for 45 years to Cristina Corona, the Chief Justice said, “Kita naman ninyo, walang kakupas-kupas.” (You can see for yourselves. [Her beauty] has not faded.)

Dragged into the impeachment trial because of properties acquired, loans extended, and appointment by former President Arroyo to the Camp John Hay Management Corp, Mrs Corona has been accompanying her husband in most public appearances – from the Senate to the Supreme Court.

Corona also again lambasted the media, blaming them for tainting his name.

“It is so easy to destroy a reputation which a person has taken a lifetime to painstakingly build. Well-funded media campaigns can destroy reputations, even before the target has even had the opportunity to present his side.”

The objective, he said, was to destroy him and his family “without even giving us any chance to defend ourselves.”

For the past 2 months, 2 newspapers and a broadcast network, according to him, have “crucified me and my family without letup,” adding that paid bloggers are all over the Internet, vilifying him.

“Taxpayers’ money is being used…with so much ruthlessness and malice, the likes of which I have never seen in my entire life.”

Towards the end, Corona said, “I have nothing to gain but everything to lose in this fight…I thank God for this one great opportunity of a lifetime, which does not happen often, to show that in this world, there are men willing to lose everything, including their lives, for what they believe in.” – Rappler.com