‘Killed for no reason’: Matobato’s claims on the Davao Death Squad 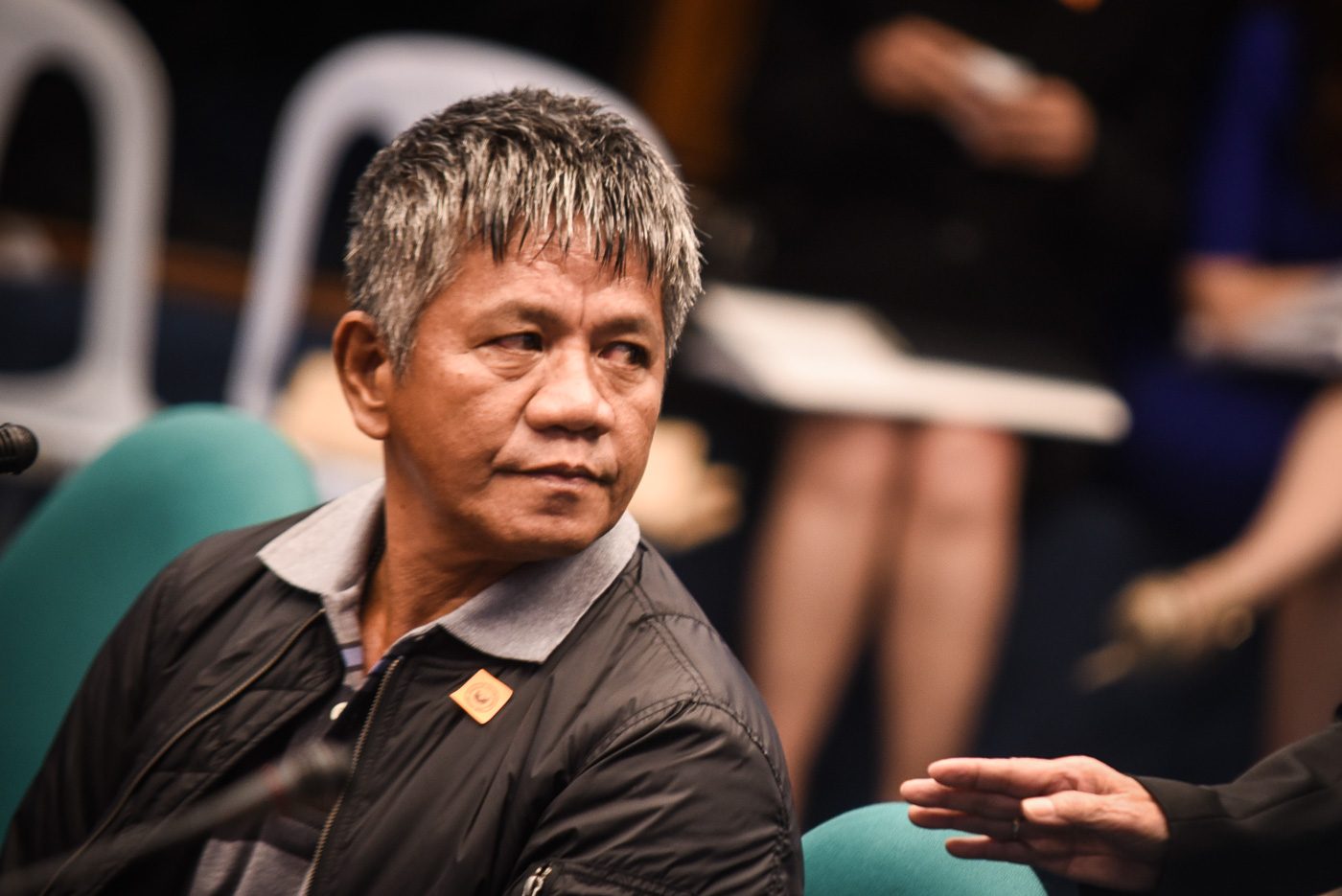 Facebook Twitter Copy URL
Copied
Edgar Matobato, who claims to have been a member of the infamous ‘Davao Death Squad,’ goes into detail on their so-called operations

(They ordered too many people killed. We did not even know their names. My conscience got to me. A lot of people died in Davao.)

What was supposed to be the continuation of a Senate committee probe into the spike of killings apparently linked to the administration’s campaign against illegal drugs turned into a public hearing on Davao’s not-so-hidden secret: its death squad.

Witness Edgar Matobato, who claimed to have been a member of the vigilante group, claimed President Rodrigo Duterte – then mayor of Davao City – created the group and tapped them to execute suspects and criminals in the city.

Over the course of the 5-hour hearing, Matobato went into the gory details of his “assignments,” hurling one allegation after another against Duterte, his son and current vice mayor Paolo Duterte, and even current Philippine National Police (PNP) chief Director General Ronald dela Rosa, who spent most of his career in the Davao region.

Here’s a summary of Matobato’s allegations and how the Senate – including Duterte’s fiercest defenders and strongest critics – reacted to the Thursday hearing.

Matobato, who introduced himself as a former militia man, said he was later recruited into the “Lambada Boys,” a “liquidation squad” formed by Duterte. The group, initially composed only of 7 members, would expand and later be dubbed the “Davao Death Squad.”

The expanded group, said Matobato, included policemen and former members of the communist New People’s Army. Sonny Buenaventura, who Matobato said was Duterte’s longtime aide, was supposedly one of their handlers.

The 57-year-old said their ultimate boss was “Charlie Mike” – their code for Duterte.

Some of the earliest jobs Matobato claimed Duterte ordered were a series of attacks on various mosques in Davao City. He said these were planned as a form of retaliation after a blast hit the Davao Cathedral. Matobato claimed he himself hurled a grenade at the Bangkerohan Mosque.

Nearly a decade later, they were ordered to kidnap and kill a certain “Sali Makdum,” a suspected terrorist. He said the group kidnapped, killed, and later chopped Makdum into pieces.

In 2003, Matobato said Duterte ordered the killing of radio commentator Jun Pala, one of Duterte’s harshest media critics. The self-confessed hitman said it was Duterte, through his supposed right-hand man Arthur Lascañas, who ordered Pala killed.

Malacañang was quick to downplay Matobato’s claims, with Palace Spokesman Secretary Martin Andanar saying that Duterte was not “capable of giving a directive like that.” Yet, in several media interviews before he won the presidency and even in speeches delivered as president, Duterte had made several references to killing criminals. (READ: Duterte, his 6 contradictions and planned dictatorship) In 2013 alone, Matobato claimed Paolo ordered the killing of a man who he supposedly had an argument with. They gunned down the man inside his home in Deca Homes subdivision in broad daylight. Two other people — who happened to be inside the house that day – were also killed. He would later say that guilt over the “accidental” kills were one of the reasons why he decided to opt out of the Davao Death Squad.

The same year, Matobato said Paolo also ordered the death of a man he fought with while waiting in line at a gas station. The body was supposedly dumped at the Marfori Heights subdivision in Davao City.

One of the more sensational cases Matobato linked Paolo to was the killing of Cebuano businessman Richard King in 2014. He accused Paolo of ordering the kill, supposedly because the younger Duterte was King’s rival in wooing a woman, whom he identified as the owner of a McDonald’s store in Davao.

Some details of Matobato’s narration, however, do not match with details previously established by police and published in media reports. The Davao vice mayor was quick to dismiss these allegations, saying there were merely “hearsay.” (READ: Lacson questions witness testimony on King slay)

It was King’s murder that ultimately forced Matobato to flee, he said. The group tried to pin him down in the murder of King, even if we wasn’t involved in the operation. A Davao cop, Superintendent Leonardo Felonia, was eventually detained in connection with the King case.

But Paolo Duterte’s antics, claimed Matobato, went beyond masterminding the killing of enemies. Matobato said Duterte was involved of illegal smuggling and was the friend – and apparent “protector” – of “Chinese drug lords” in Davao.

This explains why only “small time” drug suspects are killed in Davao, Matobato claimed.

Matobato said Paolo himself was a drug user. “Parang sadista na rin sila. Marami nang iniutos na ipapatay. Parang sabog pumupunta sa amin (He’s a sadist too. He’d order the deaths of so many people. He’s come to us high),” he said of the vice mayor.

Upon questioning by Senator Alan Peter Cayetano, a staunch Duterte ally, Matobato admitted he himself had never seen Paolo Duterte take drugs but insisted that he knew what drug users looked like. For a while, it seems Philippine National Police (PNP) chief Director General Ronald dela Rosa would be off the hook during the hearing – at least, until Matobato claimed that Dela Rosa was well aware of their 2002 operation against “Salik Makdum.”

Matobato said Dela Rosa was then the head of the Presidential Anti-Organized Crime Task Force (PAOCTF), a special group under the Office of the President. But Senator Panfilo Lacson and Dela Rosa himself questioned this claim, since PAOCTF officially ceased to exist after 2001, or after former president Joseph Estrada was ousted.

Dela Rosa was once the Eastern Mindanao chief of PAOCTF. The PNP chief, who was also Davao City police director under President Duterte and later, his daughter Sara, said he had heard of Matobato but did not know him personally.

Matobato, said Dela Rosa, was a known gun-for-hire in Davao City. But Dela Rosa insisted that he had never met Matobato until the Thursday hearing.

Dela Rosa had long insisted that he is against extrajudicial killings and is angry at vigilante killings. He also denied the existence of the Davao Death Squad but admitted that vigilante groups were present in Davao.

Although he implicated Duterte and his son in the killings, Matobato seemed to make it a point to say that Sara Duterte, the current Davao City mayor, was not involved in the supposed squad at all.

He recounted that Sara once chastised Dela Rosa for the spate of deaths and the police’s failure to catch any of the suspects. But Dela Rosa supposedly said he would not step down from his post until his term as Davao City police director officially ended.

Matobato claimed he was a “contractual” employee of the Davao City Hall, earning P6,000 monthly from 1988 to 2013. He first called himself a “ghost” employee, a term that several senators questioned and corrected in the course of the hearing.

He claimed it was standard for Davao police to plant guns on their targets, to match their alibi that the suspects “fought back (nanlaban).” Police also supposedly made it their habit to plant drugs as “evidence” when killing suspects.

“Nanlaban” is a familiar world nationwide in the context of the ongoing war on drugs. (READ: ‘Nanlaban’: Duterte’s war on drugs)

Matobato also said one of their dump sites for their victims was the Laud quarry in Davao city, which is owned by former cop Bienvenido Laud. The same quarry was visited by the Commission on Human Right (CHR) in 2009 when it investigated the Davao Death Squad.

Senator Leila de Lima, who heads the Senate probe, also headed the CHR then. Matobato claimed that when De Lima and her party visited the supposed grave sight, they were already in “ambush position.”

Gruesome details of Matobato’s testimony included the apparent need to cut the stomachs of their victims open to the “fish could eat them” and “so the bodies wouldn’t float.”