Filipinos have a love affair with the music icon, whose soulful and vocally challenging songs have become staple in TV performances and singing competitions.

Artists in Philippine entertainment industry and Filipinos who were touched by or have performed Houston’s songs through the years expressed their grief and admiration through social media.

Below are some of their posts:

Maria Lourdes Aragon @mariiiaofficial: I’m speechless. I seriously cannot believe this. You’ll be in my heart forever, and I will ALWAYS love you :'(

Rajo Laurel @rajolaurel: 48 yrs Old? That is too young! Grabe! This is such a tragedy! R.I.P. Whitney Houston.

MsLeaSalonga: Whitney Houston’s amazing voice will be remembered forever. Let us rejoice that she left the world so much music! Bravo! You will be missed.

zsazsapadilla: Such a sad day. 🙁 I grew up singing your songs, Whitney Houston. Your memory and music will live on in our hearts. R.I.P.

juLiusbabao: Sad day today. Many of us grew up listening to Whitney & watching Her on MTV. #RIPWhitneyHouston

ShowbizManila: Hearing about Whitney Houston’s passing makes me so sad. She was just an amazing singer. And the way she filled up the screen inThe Bodyguard..rest inpeace Whitney.

WilsonLeeFlores: People like 48-year-old USA singer Whitney Houston may have died, but their art—like music—shall live on forever. Condolence.

luigiquisumbing: Whitney Houston passed away today. Tremendous loss to the music community. We all have our own favorite song of hers.

News of Houston’s death has pushed her and her songs to Twitter’s Philippine trend list: 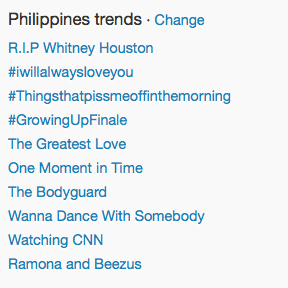 Global artists also turned to Twitter to express their sentiments:

serenawilliams: #OneMomentInTime has propelled me to many of my grand slams victories. #whitneyhouston

justinbieber: just heard the news. so crazy. One of the GREATEST VOICES EVER just passed. RIP Whitney Houston. My prayers go out to her friends and family

hansonmusic: So sad to hear that #whitneyhouston has passed away. What a great voice. Sad day for music. -Z

BrunoMars: This is terrible news..I’m sick to my stomach. Nobody sang like Whitney

MariahCarey: My heartfelt condolences to Whitney’s family and to all her millions of fans throughout the world.

itstonybennett: It’s a tragedy. Whitney Houston was the greatest singer I’ve ever heard and she will be truly missed.

YO_RANDYJACKSON: wow I am devastated. the world has lost another one of the best voices in history. RIP whitney houston, so fortunate am I to have worked with u, and have u touch my life. may god bless this family.

Houston and her songs are also on the Twitter’s worldwide trend list:

Houston’s death was confirmed to US news outlets by her publicist, Kristen Foster, on Saturday, February 11 (Sunday, February 12, Philippine time).

Paramedics arrived at the scene 2 minutes later, where a woman, who later turned out to be Houston, was being revived by the hotel emergency personnel.

Rosen said Houston was pronounced dead at 3:55 pm Saturday (7:55 am Sunday in the Philippines), and there were no signs of any criminal involvement in the death. She was positively identified by family, friends, and coworkers, and next-of-kin have already been notified.

The Beverly Hills Police are currently investigating the incident.

Houston was reportedly at the hotel for a pre-Grammy Awards party. The awards ceremonies are to be held on Sunday, February 12 (Monday, February 13 in Manila).

The American singer who has sold at least 55 million records in the US alone reigned in the middle 1980’s to late 1990’s with her effortless and powerful vocals rooted in black church music has influenced younger generation of singers from Christina Aguilera to Mariah Carey.

Her majestic voice and poise were ravaged by drug use and rocky marriage to singer Bobby Brown.

In early 2012, she was reported to be bankrupt and has resorted to asking money from friends.

Houston, born Whitney Elizabeth Houston in August 9, 1963, is one of the best-selling music artists of all time, and was included in the 2010 Guiness World Records as the most awarded female act of all time.

She was the daughter of Gospel singer Cissy Houston, a niece of Dionne Warwick, and the goddaughter of Aretha Franklin.

She exploded into the music scene in the 1985, with her hit album “Whitney Houston,” selling millions of copies.

Some of her hit songs were Saving All My Love for You, How Will I Know, The Greatest Love of All, Where Do Broken Hearts Go, I Will Always Love You, and I Wanna Dance With Somebody.

She also acted in several hit films, such as The Bodyguard, Waiting to Exhale, and The Preacher’s Wife.

However, drug abuse tainted her life and career, believed by many to have been influenced by her husband of 14 years, singer Bobby Brown. She ended their marriage in 2006. They have one child, Bobbi Kristina.

Her most recent album was 2009’s I Look To You, part of her attempt to return to the music scene.

CNN TV also reported she was also scheduled to take part in the remake of the film “Sparkle.” – Rappler.com