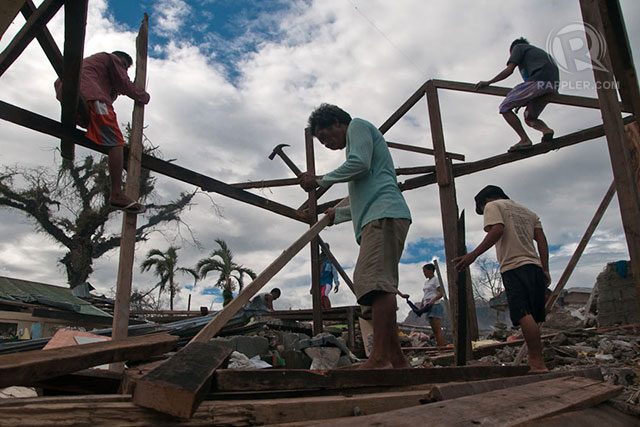 Facebook Twitter Copy URL
Copied
The Vice President says some housing requirements have hampered housing projects in disaster-hit areas like Eastern Samar, where only 12% of homes for Yolanda victims have been built, so far

Robredo bared her goal in a recent visit to Hernani town in Eastern Samar, where she learned that only 12% of the 205,000 homes for victims of Super Typhoon Yolanda (Haiyan) in the province have been completed, nearly 3 years after the disaster.

The Vice President, who chairs the Housing and Urban Development Coordinating Council (HUDCC), said that on average, it takes two to 3 years to secure a land title for a housing project.

In the provinces, she said, the ownership of some properties are only backed up by tax declarations – proof that amortization is paid but not of ownership.

“We want to shorten the processing time from 3 years to 15 days,” Robredo said.

This goal, she added, requires the help of other concerns agencies. “We cannot do it alone in HUDCC as we there are other agencies involved. That’s the problem.” she said in Filipino.

The Vice President cited the need to address problems in housing as she noted that in Eastern Samar,  only 12% of Yolanda-destroyed homes have been rebuilt 3 years later.

In Hernani town alone, only 200 housing units are under construction out of the promised 900 units. – Rappler.com