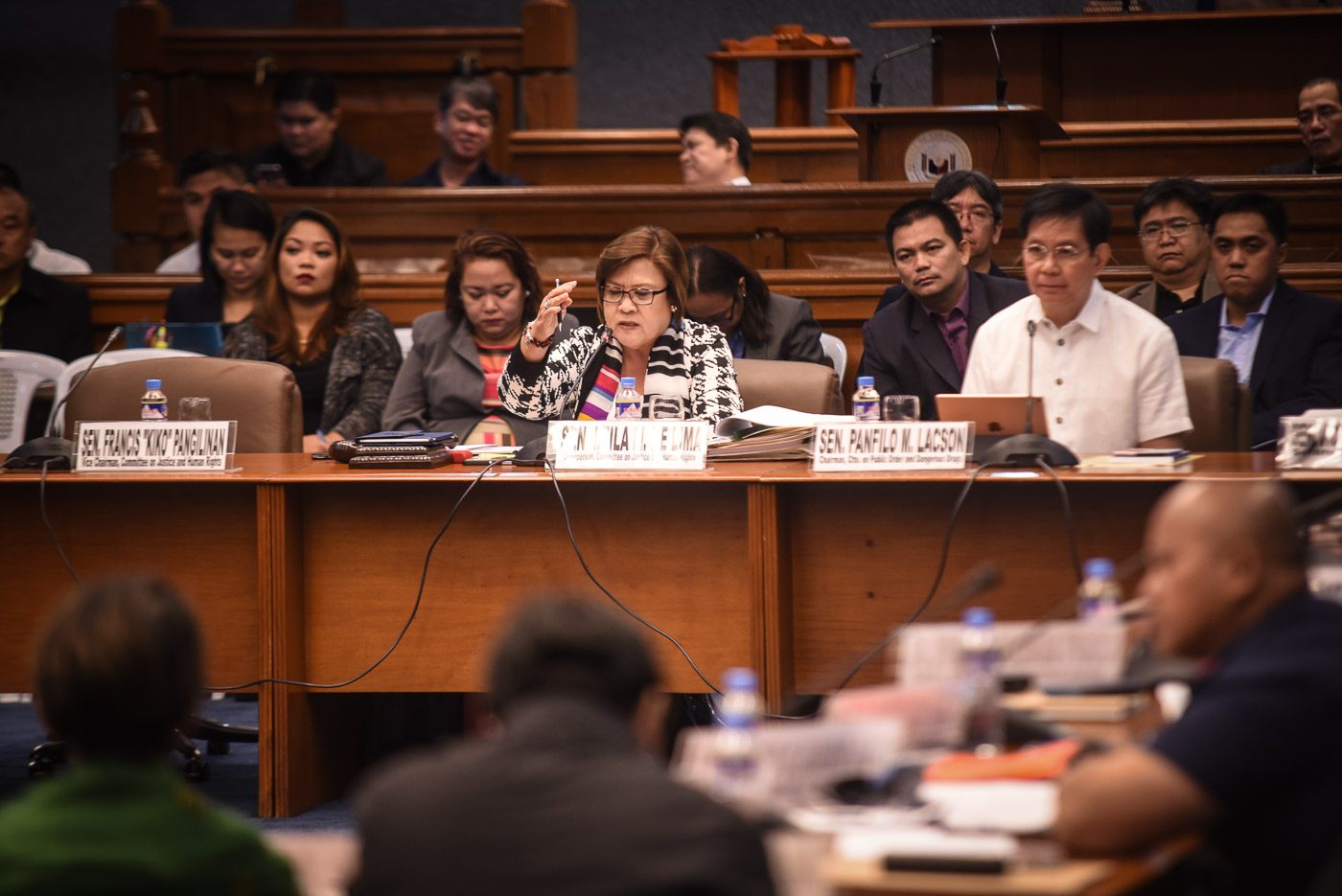 Facebook Twitter Copy URL
Copied
'I urge my fellow senators not to use their committees as a venue to besmirch anyone, to remain impartial and do not allow anyone to use our chamber for grandstanding and mudslinging,' says Senate Majority Leader Vicente Sotto III

MANILA, Philippines – In what the opposition called an “unprecedented” development, the Senate voted 16-4 to oust neophyte Senator Leila De Lima as chairperson of the committee on justice and human rights, which is looking into the spate of extrajudicial killings under the Duterte administration.

Some of the senators who voted against the senator said they decided to do so as De Lima had evidently become “biased” in handling the probe.

“I voted yes. It’s better that we have a more objective chairman,” said Pimentel, who was once a client of De Lima in the electoral protest he lodged against Senator Juan Miguel Zubiri.

Pimentel said he is concerned that the committee report under De Lima would be slanted.

“Because I’m worried about the committee report – how it will be written, how the presentation will look like. There should be no slant, no bias from the very start. You just base the report on what came out during the hearing,” he said in a mix of English and Filipino.

While saying it was a difficult choice to make, Pimentel claimed the majority decision is “all for the good of the Senate” and the country.

Senate Majority Leader Vicente Sotto III, in a strongly worded statement, advised other senators to remain “objective” in their conduct.

“What happened in the committee on justice today should serve as an example that the Senate should remain objective and perform its mandate in aid of legislation,” he said in a statement.

Sotto said senators should remain “impartial” and not allow the Senate to be a venue for “grandstanding and mudslinging.”

“I urge my fellow senators not to use their committees as a venue to besmirch anyone, to remain impartial and do not allow anyone to use our chamber for grandstanding and mudslinging,” Sotto said.

It was Pacquiao who made the motion on the floor for the Senate to declare as vacant all posts in the justice committee, after Senator Alan Peter Cayetano delivered a privilege speech against De Lima and her “allies.” (READ: De Lima walks out during Cayetano Senate speech)

“The Senate rules were not being followed anymore. As committee member and chair, we should follow those rules. A lot of violations have been made. We all know that the committe should not be used for your personal agenda. You shouldn’t show your biases,” Pacquiao told reporters in Filipino.

Asked what rules De Lima violated, Pacquiao refused to go into details and just reiterated that the lady senator had violated a number of them.

“I won’t go into them one by one. There were too many, if you only knew the Senate rules,” he said.

Paquiao admitted he and some allied senators talked about removing De Lima as justice panel head.

“We had to discuss it because the problem created [by that hearing] didn’t damage only the justice committee but the Senate’s name,” he said.

Senator Juan Miguel Zubiri said the decision to oust De Lima was nothing personal. Majority of senators, he said, only wanted a “fair” committee chair.

“We voted for yes. We’re tired of committees in the Senate being used for political means. I would rather see a working Senate, working committee chairperson that is a bit more fair,” Zubiri told Rappler.

For Zubiri, the lady senator has been “anti-administration” in her judgements and decision.

Senator Joseph Victor Ejercito said De Lima and her allies’ efforts to “discredit” and “destroy” the President had “dragged” the country down.

Ejercito said Duterte should be given a chance, as it has only been 3 months since he assumed office.

Drilon expressed dismay over the decision, which he – a longtime senator and former Senate President – said was unprecedented.

“Well, certainly I’m not happy, but that’s the rule in the Senate. This is the first time this happened. But we abide by the majority here in the Senate,” Drilon told Rappler.

Asked if the decision was politicized, Drilon refused to answer: “I don’t want to attribute motives to my colleagues.”

Senator Aquino, for his part, called the conduct of the vote “unnecessary and unprecedented.”

The ouster of De Lima, he said, had put the Senate’s independence to the test.

“The new leadership of the Committee on Justice must show that it is fair, unbiased and committed to bringing out the truth at all costs,” Aquino said.

Senator Risa Hontiveros said there was “no overwhelming reason to declare the chairmanship of the committee on justice vacant.”

“If there were issues against Senator Leila’s objectivity, the proper venue for this was the committee on ethics,” she said.

De Lima is also facing an ethics complaint for her alleged immoral conduct and her supposed links to the proliferation of illegal drugs in the national penitentiary. The House of Representatives is set to hold a hearing on the same matter on Tuesday, September 20. – Rappler.com