Pacquiao, Sotto echo Duterte: UN should not meddle with PH 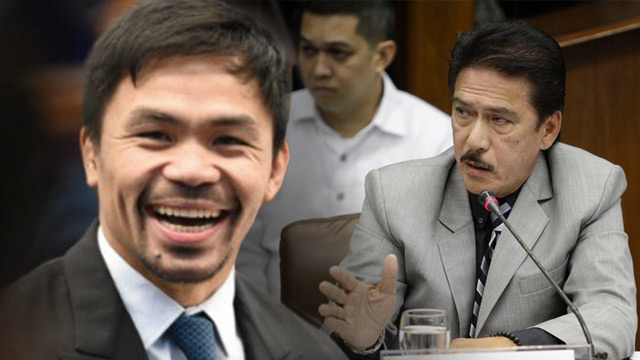 Sotto said the UN has no reason to meddle with Philippine affairs.

“If you’re asking for my personal opinion, hindi ako supportive (I am not supportive). Bakit makikialam ang UN sa atin? Payag ba sila na makikialam din tayo sa kanila? (Why would UN meddle with our affairs? Will they allow us to meddle in theirs?)” Sotto told reporters on Wednesday, September 21.

Sotto said the UN should be the one to explain their stance on abortion, saying it is the “highest form” of human rights violation.

Sotto is strongly against abortion, contraceptives, and the Reproductive Health law.

“Eh di pakikialaman ko yung pagtuturo nila ng (Then I will meddle in their teaching of) abortion because to me, the highest form of human rights violation is abortion and the UN officials are supporting it and recommending it,” Sotto said.

Citing what he said was a speech of UN Secretary General Ban Ki-Moon, Sotto hit the UN for encouraging countries where abortion is illegal to “find ways to skirt strict abortion law.”

“For me that’s the highest form of human rights violations. Tapos pakikiaalam nila tayo? And dinadamay nila ang mga namamatay sa drug operations ng police na nag-resist, (And then they will intervene with our affairs? And they’re including those who died in drag operations because they resisted.)” Sotto said.

Sotto also hit the international body for only reporting on the killings and not on the 16,582 arrests.

“They are concentrating on drug operations of the police tapos dinadamay nila pati ang mga pinapatay ng mga gang war (and then they will also count those who were killed by gang wars). Bakit natin hahayaang na makialam ang UN dito? (Why would we allow them to intervene?” he said.

Sotto said De Lima’s resolution would be referred to the committee on foreign relations, which is headed by Senator Alan Peter Cayetano – a staunch ally of President Rodrigo Duterte.

Pacquiao, for his part, said no other nation should tell the country what to do. For him, it is a “very wrong move.”

He defended President Duterte’s actions, saying he only wants the good for the Philippines. After all, he said the country needs discipline, which only Duterte could offer.

(There really should be discipline because people are hard-headed. If everyone follows, the President wouldn’t discipline like that.)

The UN has repeatedly cricitized Duterte’s stance on human rights – something that did not sit well with the President.

Duterte, in response to the UN, threatened to leave the international body but later claimed it was just a joke. (READ: Philippines ‘not leaving’ UN amid Duterte threat)

Duterte also earlier invited the UN special rapporteur to a public debate but retracted it later on. – Rappler.com