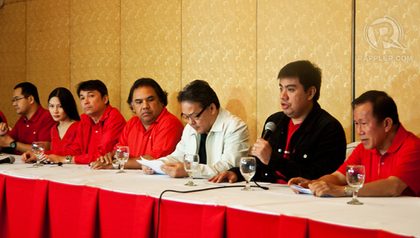 MANILA, Philippines [UPDATED] – The lawyers of Chief Justice Renato Corona accused Palace officials of interfering in the impeachment trial by sending overtures and offering P100 million to some of the senator-judges.

In a caucus on Monday, February 13, the senator-judges are set to decide on whether or not to heed the Supreme Court’s temporary restraining order (TRO) on the Chief Justice’s dollar accounts.

In a press briefing on Sunday evening, February 12, the defense team said that it was Executive Secretray Paquito Ochoa Jr himself who has been reaching out to some of the senators.

“We received reliable information that ES Ochoa, acting on behalf of President Aquino, has been phoning senator-judges to defy the TRO (temporary restraining order) on PSBank,” Dennis Manalo of the defense team said at the briefing held in Club Filipino in San Juan.

Refusing to name their source, the defense team only went as far as revealing that the source was a “he.” The source could not be identified, the defense lawyers said, since “we have to protect him as promised.”

Defense-lawyer Ramon Esguerra said the source was not among the senator-judges. But earlier, former Sen Francisco S. Tatad alleged that the Palace had already sent overtures to some senator-judges not to honor the High Court’s TRO.

Tatad was quoted by ABS-CBNnews as saying, “But some senators, speaking in the strictest confidence, revealed having received a call from Executive Secretary Paquito Ochoa allegedly to transmit an urgent personal request from the President that they not honor the TRO.”

Corona’s lawyers also alleged that Malacañang offered P100-M for the senators to ignore the TRO. “We cannot fight the resources of the government,” stressed Esguerra.

In a vote of 8-5, the High Court on Thursday, February 9, issued the TRO to stop the impeachment court from compelling PSBank, one of Corona’s bankers, to release more information about the Chief Justice’s dollar deposits, citing a law on confidentiality of foreign-denominated bank accounts.

The defense lawyers called on the public to “guard against efforts to undermine the Constitution and…to secure the independence of the judiciary.”

If the senator-judgest do not respect the TRO, Esguerra stressed that the consequences could include a “backlash not only on the Chief Justice, but on the banking industry and the entire economy” as well.

The Palace and prosecution team immediately denied all the claims of Corona’s lawyers.

In a statement on Sunday, Ochoa categorically denied that he approached the senator-judges.

“I deny the unsubstantiated, unattributed allegations by the Defense Team of Chief Justice Renato C. Corona that I have been calling members of the Philippine Senate to convince them to defy the TRO the Supreme Court has issued with regard to allowing access to the dollar accounts of the Chief Justice,” Ochoa said.

“I respect the right of the lawyers of the Chief Justice to protect the interests of their client, within the bounds of the law. However, citing rumors to prove baseless accusations to support their cause goes against the principles of decent and ethical lawyering,” Ochoa said.

Likewise, Presidential Spokesperson Edwin Lacierda said in a separate statement that “the defense counsel’s press conference is an example of how you should not believe everything you hear. There is a lot of loose talk and idle talk, not to mention malicious speculation going around.”

“It is incumbent on people who should know better not to fall for every conspiracy theory whispered to you,” Lacierda added.

Budget Secretary Florencio Abad, meantime, said that the defense team is “engaging in diversionary tactics anticipating another week of explosive revelations on the hidden but now exposed peso and dollar bank accounts of Corona.”

Abad, who enjoys the confidence of President Aquino, stressed that the defense are showing signs of “desperation.”

“They expect more damaging info to come out, especially after a serious blunder by [defense lead counsel Serafin] Cuevas in moving for a presentation of month-by-month balances of Corona’s accounts and the disclosure of other bank accounts and investment instruments of Corona, both of which were given due course by the impeachment court,” he said.

Abad added that the supposed P100-M offer from the Palace is “a complete fabrication.”

“It’s an insult to the senators and to the Senate as an institution. It’s another lie in a web of lies being woven by the Corona camp to discredit the impeachment process.

Abad also shrugged off previous talks that President Aquino had directed tax bureau chief Kim Henares to investigate the books of the Iglesia ni Kristo (INK), and Abad to seek audience with the leaders of the influential religious group.

“It is unfair and even contemptuous to preempt the senators who have yet to discuss the matter in a caucus tomorrow,” he said.

“Respondent CJ is trying to demonize the Executive, and blackmail the Senate to vote in their favor as part of the mind conditioning strategy. Respondent has no respect for the constitutional process of impeachment, the Senate impeachment tribunal, and the Senators,” he said in a statement.

“The allegation of respondent CJ Corona against the ES is very irresponsible because he cannot name his source,” he added.

The impeachment trial is approaching its 5th week. The prosecution team has presented real estate properties and around P31-M bank deposits of Corona in a trial that has been widely covered by the media.

Previously, officials from Bank of the Philippine Islands and thrift bank PSBank had taken the witness stand to provide some details on the peso-denominated bank accounts that Corona maintains with them.

Tackling Corona’s dollar accounts with PSBank–including one that reportedly has $700,000 in it–remained thorny as different sides debated on whether these funds in foreign currency are covered by secrecy laws. – Rappler.com