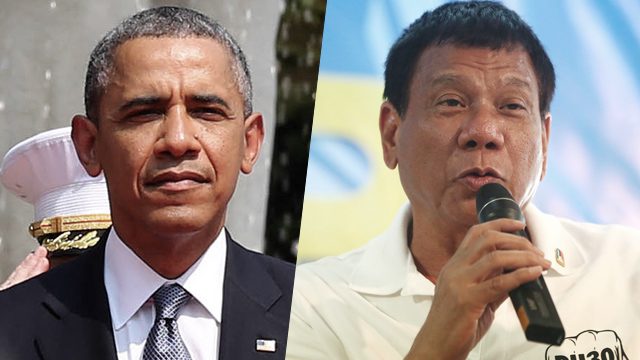 “‘Yung mga human rights, halikayo. Halikayo. (Those big on human rights, come here.) So I would be inviting the Human Rights Commission, the EU, Obama if he wants to come here,” said Duterte on Friday, September 23.

He was speaking at the Philippine National Police Region 12 headquarters in General Santos City.

His only condition is that they allow him to ask them questions too in an open forum.

Though Duterte has said he has ordered Executive Secretary Salvador Medialdea to send the invitations, Communications Secretary Martin Andanar said in a Friday statement that “there is no formal invitation” as of the moment.

Obama is another critic of his controversial “war” on drugs. In a regional summit both Duterte and Obama attended, the US leader said there is a “right way” to fight drug syndicates.

He also said the cost of fighting drugs the “wrong way” is that “innocent people get hurt, and you have a whole bunch of unintended consequences that don’t solve the problem.”

At the ASEAN summit, Duterte and Obama were supposed to meet for bilateral talks but this was postponed after the Philippine President went on a curse-laden tirade against Obama and the US.

According to police, deaths linked to drugs number over 3,300. Of these, around 1,200 were killed in police operations because they allegedly fought back. But more than half, or around 2,200, were victims of vigilante-style killings.

Duterte has emphasized that these extrajudicial killings are not sanctioned by his administration. – Rappler.com