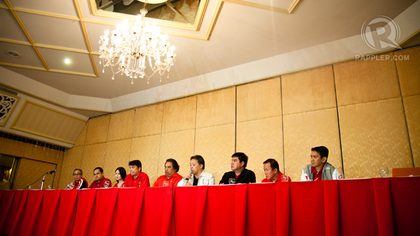 MANILA, Philippines – Members of the prosecution panel said the defense panel’s surprise press conference on Sunday night, February 12, was meant to “demonize” Malacañang, “hostage” the Senate impeachment court, and set the stage for a walkout if it doesn’t get what it wants.

“[The Chief Justice] is trying to demonize the Executive, and blackmail the Senate to vote in their favor as part of their mind conditioning strategy,” lead prosecutor Niel Tupas Jr asserted in a statement.

The senator-jurors will hold a caucus on Monday, February 13, to decide what they will do with the Supreme Court’s Temporary Restraining Order (TRO) on the release of Chief Justice Renato Corona’s dollar account details.

“The Chief Justice practically put a gun on the senators-judges to scare them. The timing could not have been more suspicious as the senators are about to decide in a caucus tomorrow whether to go ahead and open the dollar bank accounts,” he said.

President Aquino has been openly supportive of removing Corona from the Supreme Court.

Prosecutor Neri Colmenares said the defense panel is already setting the stage for a possible walkout if the Senate impeachment court decides against them.

“They’re also trying to pave the way for walking out in case they don’t like the decision,” Colmenares said.

“They’re trying to lay the ground for walking out. They were hinting that they will not accept a Senate decision to implement the subpoena because of the bribery,” Colmenares explained.

Quimbo said it is also an attempt to “condition” the public into thinking that the Senate impeachment court is not independent.

“We pray that the Senate will not be swayed by these reckless and malicious imputations coming from the defense,” Quimbo said. – Rappler.com