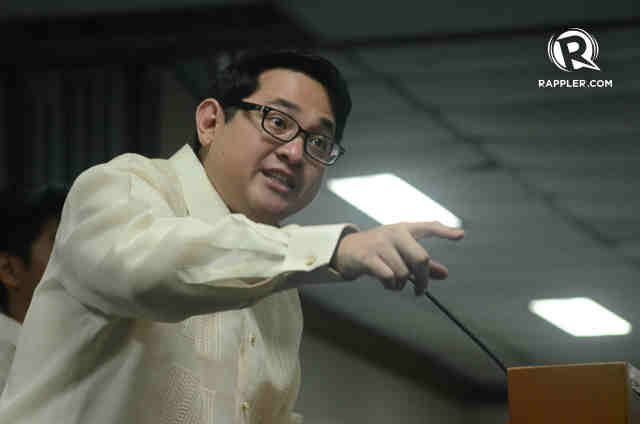 MANILA, Philippines – With all the conflicting statements of the executive branch on foreign relations, Senator Paolo Benigno Aquino IV has asked the Senate to conduct an inquiry into the foreign policy direction of President Rodrigo Duterte to protect the country’s national interest.

In filing Senate Resolution Number 158, Aquino said there is a need for the government to clarify its position.

“Given the number of conflicting statements coming from the President and senior government officials, there is a need to clarify government’s position and engagement with its neighbors and allies, and to ensure the Filipino public that we are pursuing a clear and coherent foreign policy that is most beneficial to the country,” Aquino said in the resolution.

He maintained a clear strategic foreign policy is “integral” to the country’s development.

“Our relations with members of the international community have bearing on our ability to protect our territory and environment, develop our economy, and promote the welfare and well-being of our citizens,” Aquino said.

He also cited the 1987 Constitution, which mandates the government to pursue “an independent foreign policy,” with national sovereignty, territorial integrity, and national interest as paramount considerations.

Aquino, in his resolution, cited the different conflicting statements of Duterte and his men.

With the favorable Permanent Court of Arbitration decision, Aquino said the Philippines had the chance and “initial momentum” to rally Asian neighbors to unite against China’s increasing aggressiveness in the region.

But what Duterte did instead, Aquino said, was opt for a “soft landing” and send former president Fidel V. Ramos as special envoy to revive Manila’s relationship with Beijing.

“Speaking to the Chinese ambassador on August 29, the President reportedly said that he is willing to temporarily set aside the PCA ruling so as not to endanger the ongoing talks, but that he means to raise it at a later time,” the senator said.

Aquino also recalled the East Asia Summit, where the President opted to deviate from his prepared speech, which would have highlighted the need to respect international law, after the PCA ruling favoring the country.

“The President instead raised the issue of killings in the Philippines under the period of US occupations, seemingly to challenge present calls for the Philippine government to uphold human rights in its war on drugs,” Aquino cited.

In his resolution, Aquino also cited the President’s intentional skipping of the ASEAN-US Summit. Malacañang earlier said the President was not feeling well but days after, Duterte himself said he purposefully did not attend “as a matter of principle.”

Aquino also noted that Duterte said in a speech before civil servants on September 12 that US troops must leave Mindanao, as they could only aggravate security risks in the area.

The senator pointed out the inconsistencies in Malacañang’s statements concerning the topic – Presidential Spokesman Ernesto Abella said Duterte’s statement was not official policy but Foreign Secretary Perfecto Yasay Jr later said that the withdrawal of troops would only be temporary.

Aquino also mentioned Duterte’s plan to buy defense equipment from Russia and China, which is contrary to the usual practice of buying weapons from the US.

The senator also cited the President’s speech before the Philippine Air Force, where he said the country would no longer join maritime patrols with the US to avoid hostilities. Yasay, later on, clarified that the joint patrols within 12 nautical miles of the coastline would still be continued.

With all these, Aquino highlighted the Enhanced Defense Cooperation Agreement signed by his cousin, former president Benigno Aquino III, and Obama, which allows the US military to deploy troops to the country for training exercises.

The Supreme Court upheld the agreement’s constitutionality in January 2016. – Rappler.com