Duterte to Russia: I’m about to ‘cross Rubicon’ with US

Sep 26, 2016 6:30 PM PHT
Pia Ranada
Facebook Twitter Copy URL
Copied
The change in policy with the US will be accompanied by more 'alliances' with China and Russia, says President Duterte 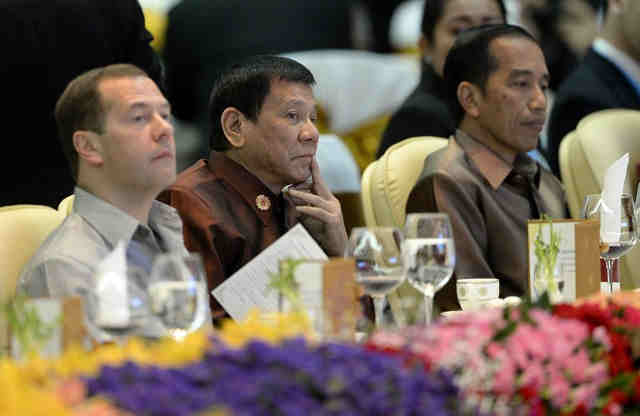 MANILA, Philippines – President Rodrigo Duterte is about to steer relations between the Philippines and the United States towards a “point of no return” along with more “alliances” with China and Russia.

This foreign policy decision he has already discussed with Russian Prime Minister Dmitry Medvedev, who he met during the Association of Southeast Asian Nations Summit in Laos in early September.

“I’ve been talking with Prime Minister Medvedev, nag one-on-one kami (we had a one-on-one meeting) and I said, ‘I think I’m about to cross the Rubicon between me and the United States, at least for the 6 years,” Duterte said on Monday, September 26, during an event with Malacañang reporters.

“I will need your help in everything – trade, commerce – and I will open up,” Duterte claimed he told Medvedev.

The President later on explained he meant there would be a “point of no return” in Philippines-US relations.

But he said this does not translate to cutting ties with the Western superpower.

“I said, I’m ready to not really break ties but I will open up alliances with China and Russia,” said Duterte.

Asked what “crossing the Rubicon” with the US means in terms of concrete foreign policy, Duterte said he finds it problematic that, despite defense treaties, there are no assurances the US will come to the Philippines’ aid in times of impending war.

“It says that an attack on the Philippines will be an attack on the United States but in the US constitution it says that before a president can declare war with anybody in defense of an ally, he has to go Congress for permission to go to war. That is the problem. So if the Congress will not give him authority, what will happen to us?” said Duterte.

As to opening alliances with China and Russia, Duterte said he was referring to economic alliances, not military alliances, with these two countries.

“I’ll open up the Philippines for them to do business alliances of trade and commerce.  There will never be a time about military alliances,” said Duterte.

But in his recent visits to military camps, Duterte said that China and Russia are offering the Philippines deals for the purchase of military equipment.

The Philippine President has said he wants the country to pursue an independent foreign policy.

In recent weeks, Duterte grabbed headlines with his expression of anti-US sentiment – from his curse-laden tirade against US President Barack Obama to his order that Philippine troops not conduct joint patrols with the US in the West Philippine Sea.

Duterte has also said he wants US special forces out of Mindanao, claiming their presence increases tension in the region. – Rappler.com