‘Crossing Rubicon’ with US? Duterte wanted ‘to dramatize’

Sep 27, 2016 2:07 PM PHT
Paterno Esmaquel II
Facebook Twitter Copy URL
Copied
'I do not think personally that he meant it in the context of veering away from our commitments to the United States,' Foreign Secretary Perfecto Yasay Jr says 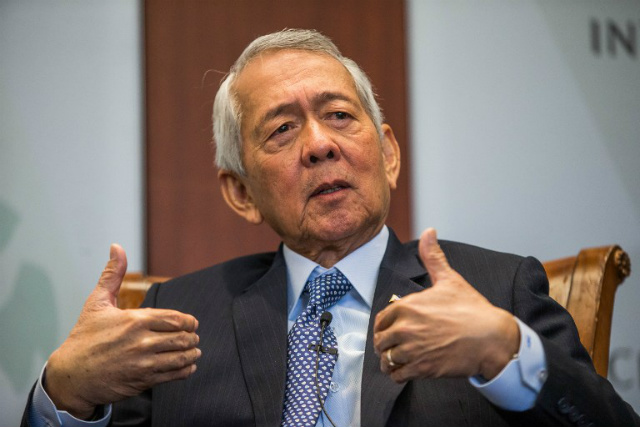 MANILA, Philippines – Foreign Secretary Perfecto Yasay Jr on Tuesday, September 27, denied that Manila is “veering away” from its commitments to Washington after President Rodrigo Duterte said he was “crossing the Rubicon” with the US.

“Well, maybe he was again saying that in a manner to dramatize what he feels are the areas that would need further strengthening in so far as our relationship with the US is concerned,” Yasay said in a media briefing Tuesday.

“I do not think personally that he meant it in the context of veering away from our commitments to the United States, particularly with our agreements and treaty, or with respect to the close and special relations that we have with the United States,” Yasay added.

Yasay made this statement after Duterte on Monday, September 26, recounted his recent meeting with Russian Prime Minister Dmitry Medvedev.

Duterte recalled telling Medvedev, “I think I’m about to cross the Rubicon between me and the United States.” He said this applies “at least” in the 6 years, or during his term as President.

‘Point of no return’

Asked what crossing the Rubicon means in foreign policy, Duterte explained, “It is the point of no return.”

Duterte clarified that it is not ready to “really break ties with the US,” but he “will open up alliances with China and Russia.”

“When he says, as you say, crossing the Rubicon, I understand it in the context of the fact that he is just simply emphasizing that there is a –,” Yasay said on Tuesday, trailing off. He then continued, “In his administration, he wants to make sure that the relationship mandated by the Constitution in so far as carrying out an independent foreign policy, and at the same time pursuing amity with all nations, are complied with.”

Yasay said the Duterte administration, for one, aims to boost ties with China. He said this relationship “had cooled off under the previous administration,” whose case against China resulted in a legal victory over the West Philippine Sea (South China Sea).

Yasay said Duterte’s statement on crossing the Rubicon, however, “should not be understood as meaning that we are veering away from our commitments with the US or our close friendship with the US, which is very strong.” – Rappler.com