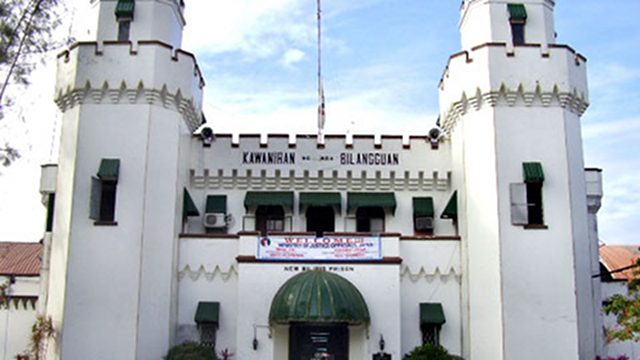 MANILA, Philippines (UPDATED) – At least one high-profile inmate at the New Bilibid Prison died Wednesday, September 28, after a “riot” erupted between inmates earlier in the morning.

In radio and television interviews, Justice Secretary Vitaliano Aguirre II confirmed that a certain Tony Co, an inmate at Bilibid, died after the riot at Building 14.

Co, Sy, and Sebastian were taken to the Medical Center Muntinlupa. While Dongail was also hurt, he did not want to be brought to a hospital and chose to be treated at Bilibid, said Aguirre.

Co is supposedly 50/50 while Sebastian is “stable,” according to the DOJ chief.

Citing what he called “sketchy, initial reports,” Aguirre said the two Cos and Sy were reportedly using shabu at the cell of Peter Co. An inmate, Edgar Cinco, saw them, and reported them to Dongail.

Dongail reportedly called out the group for using illegal drugs, and then went to the cell of Sebastian, said Aguirre. Tony Co supposedly ran after Dongail and attempted to attack him.

“There was a riot,” Aguirre said, adding that an “ice pick” was used.

In the end, Tony Co was killed. Sy, Peter Co, and Sebastian were also hurt enough to require hospitalization, said the justice secretary.

Dongail, who was the reported subject of the attack and was supposed to have been stabbed as well, according to Aguirre, was not included in the list of injured in the official statement released by Justice Undersecretary Erickson Balmes.

Dongail is one of 3 former police officers sentenced to 3 life terms – 120 years each – in 2011 for the murder and kidnapping of a former barangay captain and two maritime instructors in Bacolod City in 2003.

In an interview on ANC late Wednesday morning, Aguirre was asked who stabbed Sebastian. He replied: “The report is sketchy. My statement may not be very accurate.”

He said it would be best for the results of the initial investigation “to get facts” from the investigating authorities.

Asked how shabu could still exist in Bilibid, when it was already being guarded by the Philippine National Police-Special Action Force troopers, Aguirre said the problem could not be completely wiped out at once.

Responding to questions, Aguirre said Peter Co, Tony Co, and Sy are serving time for drug-related offenses. “They are considered among the biggest drug traders in the country,” he said.

Asked if he planned to go to Bilibid following the incident, Aguirre said he had no time as he was part of the presidential delegation to Vietnam for President Rodrigo Duterte’s official visit. They were due to leave early Wednesday afternoon.

(What I can only say is that it’s not good for the government if Jaybee Sebastian dies because we’re really counting on him to spill the beans, he goes direct to Secretary De Lima. So we don’t want him dead, we want him alive.)

‪All inmates were detained at Building 14 inside the NBP, which houses “high-profile” inmates, including those alleged to have continued drug operations inside prison. ‬

Co is among the detainees Duterte accused of still being a drug lord in incarceration. Co is a convicted drug lord.‬

‪Sebastian is supposedly one of the most influential gang leaders in Bilibid. He has also been accused of helping Senator Leila de Lima, then justice secretary, raise campaign funds within the prison through illegal drugs, which De Lima has denied. Sebastian is serving time for carnapping.