Duterte on Miriam’s death: May your legacy guide PH 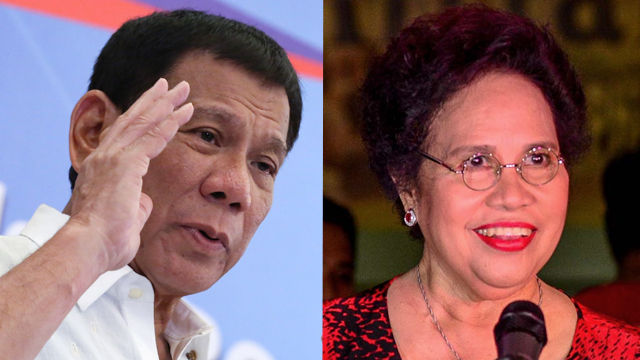 MANILA, Philippines (UPDATED) – President Rodrigo Duterte on Thursday, September 29, led the nation in mourning the death of one of its most colorful and popular politicians, former senator Miriam Defensor Santiago.

“We express our deepest sorrow over the passing of Senator Miriam Defensor-Santiago….Rest in peace, Madam Senator.  May your legacy continue to guide this nation for many years to come,” Duterte, in Vietnam for a two-day official visit, said in a statement.

The President said that Santiago, one of his foes in the last presidential elections, “has left a sterling career in public office.”

“She is best remembered as a graftbuster ‘eating death threats for breakfast,’ earning her the Iron Lady of Asia.  A constitutionalist, she has always been an advocate for the rule of law,” Duterte said.

“It’s good that Ma’am Miriam is here because she is one of the two only qualified to run this country,” Duterte said in his opening statement in that debate.

Duterte had also remarked that he would not debate with Santiago whom he did not foresee “passing away in the next 20 years.”

But days ahead of the May 9 elections, Santiago had called Duterte as the “most dangerous” candidate in the presidential race and alleged that he was the candidate of the New People’s Army, the armed wing of the Communist Party of the Philippines.

‘Passing of an era’

“She was a shining light in Philippine political annals for her sharp legal mind uncompromising stand and acid humor,” Abella said.

He said the death of Santiago “also signals the passing of an era of politicians with wide ranging intelligence and courage to express their true conviction.” (Read Santiago’s obituary: Miriam Defensor Santiago: God is not out there but in you)

“She had a profound influence on millennials and the youth, constantly challenging pre-conceived notions both political and social,” he added.

Santiago’s appeal to the youth can be gleaned from the rock-star welcome she received in campuses, and in addresses to students. Aside from her feistiness at Senate hearings and sessions, she would also be remembered for her jokes, one-liners, pick-up lines, and comebacks much loved by her young fanbase.

Santiago died on Thursday morning, two years after she announced she was diagnosed with stage 4 lung cancer.  – Rappler.com