Duterte to US senators: ‘Do not interfere in PH affairs’ 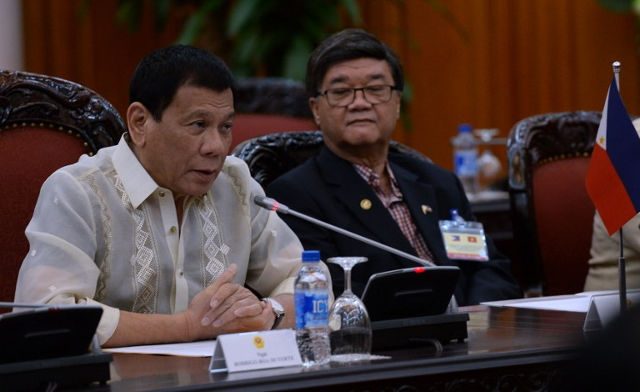 Facebook Twitter Copy URL
Copied
President Duterte also tells the United States, 'Do not pretend to be the moral conscience of the world'

MANILA, Philippines – President Rodrigo Duterte reacted to criticism by two United States senators over extrajudicial killings in the Philippines, telling them, “Do not interfere in our affairs.”

Duterte also called out the US for its “hypocrisy,” in a speech upon his return from a trip to Vietnam, early Friday, September 30.

Senator Benjamin Cardin of Maryland, a ranking member of the US Senate’s foreign relations committee, said in a colloquy with Senator Patrick Leahy of Vermont, that “in advocating and endorsing what amounts to mass murder, [the Duterte administration] has chosen the wrong way” to deal with the problems caused by illegal drugs.

Data show that at least 3,474 people have died in the Duterte administration’s war on drugs since he took office on July 1.

Cardin added, “Senator Leahy is absolutely right when he said that a lack of respect for rule of law and democratic governance breeds instability, distrust, and sometimes violence.”

“Why are you shooting the black people there when they are on the ground?” he retorted, pointing toward a perceived hypocrisy within the US government in light of its current problems with racial violence. “Sila puwede tapos tayo hindi? ‘Yan ang sinasabi ko, hypocrisy (They can do it but we can’t? That’s what I call hypocrisy.)”

He further explained, “There’s a proper way of arresting a black man there. You arrest them…you grapple with him, pin him to the ground, place him under handcuffs, and bring him to the station.”

“Do not shoot him with the video and the cameras all around. So I’m returning the courtesy. Sanay kayo ng ganoon eh (You’re use to that). You criticize people outside of your Congress,” Duterte added.

Duterte went on to explain how US intervention in Iraq, “on the flimsy excuse that there was a weapon of mass destruction,” caused Iraq to be a “fractured country” and also caused the undermining of Libya. Duterte also cited the “slaughtering” of civilians in Syria because the US wanted to remove Bashar al-Assad from power.

He reiterated his stance against the US, saying, “Do not pretend to be the moral conscience of the world. Do not be the policeman because you do not have the eligibility to do that in my country.” – Rappler.com