Alvarez: No improvement in traffic, trains after 100 days under Duterte 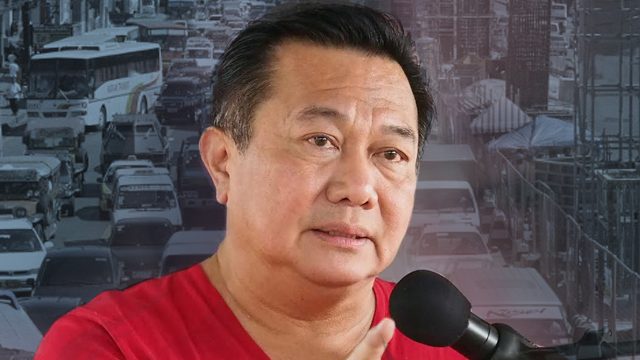 “Sad to say na wala pa akong nararamdaman na improvement (Sad to say that I haven’t felt an improvement) as far as traffic is concerned sa (in) Metro Manila and even Metro Cebu,” said Alvarez in a press conference on Monday, October 3, when asked to assess the President’s performance so far.

Long hours on the road, bumper-to-bumper traffic, and grumpy drivers have become the norm on urban roads as traffic congestion remains a perennial problem in the Philippines. (READ: Tugade clarifies: Traffic problem a ‘state of chaos, not a state of mind’)

Alvarez also pointed out that the country’s railway system continues to be plagued by problems.

The Metro Rail Transit (MRT3) as well as the Light Rail Transit (LRT) Lines 1 and 2 have suffered multiple breakdowns and technical glitches because of broken rails and signalling systems.

The MRT3 was also the subject of several Senate hearings since one of its trains derailed in August 2014.

(That’s still a problem now. Trains still break down. The system has already been privatized, right? There are lines that private corporations are already running. These problems should not be happening anymore. Recently, I think Line 1 broke down. And you can see that sometimes the train doors do not close.)

(I don’t understand why things are like that. The past administration privatized our trains to solve these problems. But nothing is happening until now. We need to address these.)

Duterte has asked the 17th Congress to grant him emergency powers to address the traffic problem.

If the President’s request is granted, the Duterte administration may open private subdivisions to motorists and even move some government offices in Metro Manila to nearby provinces.

Recently, a deal was also reached on the construction of the common station for the LRT and the MRT between SM North EDSA and TriNoma malls.

Despite his comments on traffic, Alvarez has a more positive assessment of Duterte’s overall performance during his first 100 days, which will fall on October 7.

Alvarez lauded Duterte’s ongoing war on drugs, which has led to 3,608 drug-related killings as of October 3 – both from “legitimate” police operations and apparent vigilante killings. (READ: IN NUMBERS: The Philippines’ ‘war on drugs’)

A total of 732,115 drug pushers and users have also surrendered to authorities under Oplan TokHang. (READ: Dela Rosa: We’re winning the war on drugs)