Senate to continue probe into killings but without Matobato 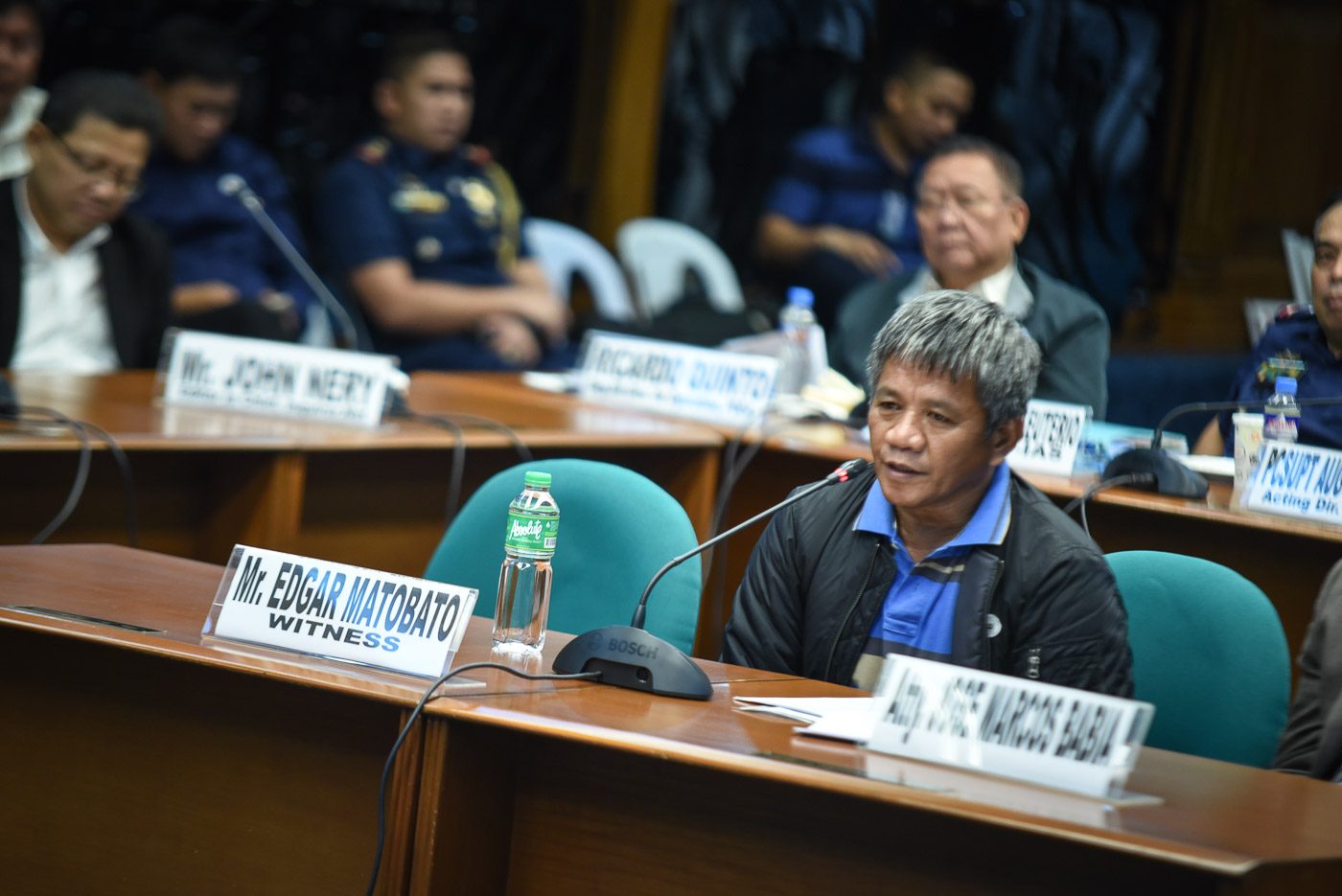 Facebook Twitter Copy URL
Copied
The decision is reached as majority of the committee members hold a caucus. Senators Leila de Lima and Antonio Trillanes IV, however, were not invited to the meeting.

MANILA, Philippines – After Monday’s fiasco, the Senate committee on justice and human rights decided to continue the probe into the spate of extrajudicial killings without witness Edgar Matobato, a self-confessed hitman of the Davao Death Squad (DDS).

Committee chairperson Senator Richard Gordon told reporters about the decision on Tuesday, October 4, after majority of the committee members held a caucus.

Senators Leila de Lima and Antonio Trillanes IV, who belong to the panel, were not invited to the meeting.

“We will continue but Matobato will no longer be an issue because he’s already damaged goods. We will set a hearing next week,” Gordon told reporters.

Asked where De Lima and Trillanes were, Gordon said: “It’s a free country. Manggugulo lang sila doon (They would just be a disturbance there). The majority, I supposed, decided to meet amongst each other. If they don’t believe us, listen to us, and hit us outside the Senate, it’s their own lookout.”

Gordon said the mood during the meeting was somber, following the heated exchange between senators the night before. (READ: Senators gang up on De Lima over Matobato kidnap case)

“Very sad, very downhearted at the actuations of the two senators. They’re going around saying (things),” he said.

Gordon accused De Lima of “material concealment” for allegedly failing to disclose early on the kidnap-for-ransom case filed against Matobato. The case was filed before the National Bureau of Investigation by the wife of Sali Makdum, the alleged terrorist killed by Matobato and other alleged DDS members. (READ: Matobato admitted kidnap case vs him – Senate transcript)

The heated exchange among colleagues led to De Lima’s walkout. (READ: De Lima to public: Sorry for my ‘outburst, walkout’ at Senate probe)

Moving forward, Gordon said the Senate inquiry would only focus on the spate of extrajudicial killings under the Duterte administration and would exclude the DDS killings.

But he said he would be open to tackling the DDS again if there would be more witnesses other than Matobato.

Gordon said Matobato would no longer be needed because he has no credibility anymore. It was Matobato who accused Duterte of ordering killings through the DDS when he was Davao City mayor.

(Only if there are other witnesses. Matobato is damaged goods. Even if you use his testimony in a case, his credibility is already destroyed.)

Asked what would happen to the past testimony of the former hitman, Gordon said it might be excluded from the final committee report. (READ: Matobato’s hits and misses)

“It has no probative value. He has totally destroyed his credibility,” the senator added.

The controversial Senate probe was launched in September through a resolution filed by De Lima seeking an inquiry into the rise of extrajudicial killings.

It then expanded to the DDS killings, through a resolution filed by Trillanes, after Matobato was presented as witness.

Days after Matobato’s testimony against the President, senators voted 16-4 to oust De Lima as chairperson of the committee on justice and human rights. – Rappler.com