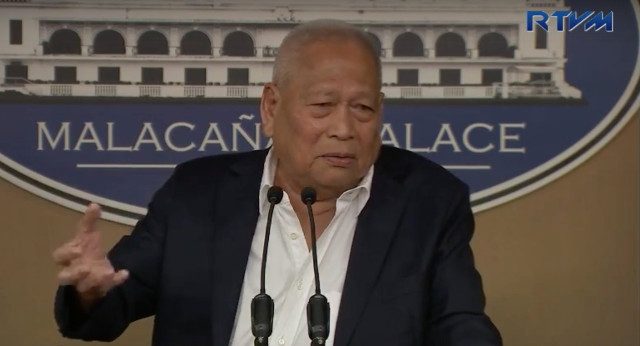 MANILA, Philippines – Former National Security Adviser Jose Almonte is hoping that President Rodrigo Duterte can change the way he speaks as he nears his 100th day in power.

“If he can make his colorful statements colorless, that’s a big change for me,” said Almonte, when asked what change he hopes to see in the President who has made international headlines by cursing the Pope, US President Barack Obama, the European Union, and the United Nations, among others.

Almonte was responding to questions at a Palace briefing on Thursday, October 6. He is the third private individual invited by Malacañang as a resource person in its press briefings on the week of Duterte’s 100th day.

“Even the President may not realize that is not good. I am hopeful he will change when the time comes,” said Almonte.

Duterte’s insults and constant tirades, he said, are a distraction to other accomplishments of his administration. (READ: Duterte: ‘Don’t hope I’ll change my character’)

“The other concentration which distracts the nation is the colorful language of the President. To me, these are, trivial things; we can correct this,” said the former Cabinet official.

Almonte, who was Director-General of the National Security Council during the Ramos administration, said Duterte’s statements on ending US-Philippines war games and reviewing the Enhanced Defense Cooperation Agreement may have a “negative” impact.

“The impact on the surface is negative, but I say on the surface because I don’t want to underrate the strategic thinking of the President,” said Almonte.

“If you take it as it is, remember our allies, like President Obama, United States, they have their own feelings. The miltary who conducts this, they are planning, so if you say they will not continue – you know if you are in an organization like the military, when you conduct an exercise, that is not done just like that in one week. That is prepared for months,” said Almonte.

Asked to comment on Duterte’s foreign policy, which based on his statements will mean cooler ties with the US and stronger ties with China, Almonte said he would recommend the Philippines stay friends with everybody.

“The Philippines could remain as friends with our old allies like America, but at the same time, we can be friends with all others including enemies of America. This will be the best policy. Let’s maintain friendship with our allies but work hard to be friends to others,” said Almonte.

Despite Duterte’s manner of speaking, which Almonte says seems to be his “only problem,” Almonte gave the President an “exceptional” rating.

“Based on what is done in the last 100 days, I say it’s exceptional,” said Almonte.

He counted as Duterte’s achievements the indefinite ceasefire with the communist rebels, the continuing negotiation on the socio-economic component of the peace process with the Left, and his talks with the Moro Islamic Liberation Front and Moro National Liberation Front.

Almonte is among the “personalities” invited by Abella to speak about the Duterte presidency as it marked its first 100 days.

“One of the reasons we asked people to come here is to be able to see objectively the results of the first 100 days,” said Abella to reporters.

Earlier this week, Abella  invited businessmen to speak on economic policies under the Duterte administration. – Rappler.com