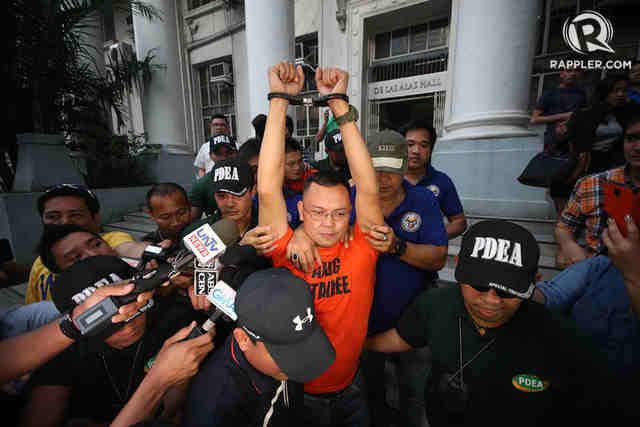 MANILA, Philippines – The House committee on justice dropped the testimony of Lieutenant Colonel Ferdinand Marcelino during the 3rd hearing on the illegal drug trade at the New Bilibid Prison (NBP) on Thursday, October 6.

Marcelino was supposedly among the witnesses that Justice Secretary Vitaliano Aguirre II would be presenting before congressmen, who refused to grant him immunity.

Marcelino had issued a signed affidavit, which detailed his assignments under the Philippine Drug Enforcement Agency (PDEA) that led him to become its representative in planning the top-secret NBP raid in 2014.

The police, PDEA, and other law enforcement agencies had coordinated with the DOJ to organize the raid. But during the September 21 hearing, Philippine National Police (PNP) Deputy Chief for Operations Benjamin Magalong said they were later surprised that De Lima proceeded with the raid without them. (READ: Why was CIDG excluded from 2014 Bilibid raid?)

Upon hearing Barbers’ and Acop’s complaints, committee chairperson Reynaldo Umali asked Aguirre to explain why Marcelino needed to testify given that higher officials who planned the raid – Magalong as well as witness and former Bureau of Corrections officer-in-charge Franklin Bucayu – were already present at the hearing.

“Under our rules, the testimony must be germane to the subject matter of House Resolution (HR) Number 105. Kung ‘yan po ay hindi para sa [HR Number] 105, as the Majority Leader [Rodolfo Fariñas] said (If that is not relevant to HR Number 105, as Majority Leader Rodolfo Fariñas said) there are other committees that can take cognizance in this testimony so that we can abbreviate or hasten the conduct of this inquiry and we will let the other committees do their jobs,” said Umali.

Aguirre explained that Marcelino’s testimony is “very, very relevant” as he would corroborate Magalong’s previous testimony and prove that he was also the PDEA’s representative during the raid.

But Barbers did not buy this, arguing that the bulk of Marcelino’s affidavit focused on his achievements rather than his narration about the raid planning.

“If I am to assess the value of the affidavit of Col Marcelino, it is nothing but a curriculum vitae or a resumé of Colonel Marcelino, kasi sinabi lang niya dun ‘yung kanyang accomplishment nung siya ay nasa PDEA etcetera, etcetera (because he only cited his accomplishments when he was with PDEA),” said Barbers, who is the chairperson of the committee on dangerous drugs.

Acop, who heads the committee on public order and safety, also reasoned that Marcelino is facing a drug-related case.

In January 2016, the DOJ under De Lima investigated a complaint of the PNP-Anti Illegal Drugs Group (AIDG) and PDEA against Marcelino for allegedly violating the Comprehensive Dangerous Drugs Act of 2002 for being in possession of P380 million worth of illegal drugs. (READ: Marine colonel: I would never betray country for drugs)

Marcelino said he was only on a secret mission. The case was then dismissed in June 2016 but the PNP-AIDG and PDEA filed a motion for reconsideration. The DOJ later reversed its ruling.

Barbers then made a motion to reject Marcelino’s testimony and instead use it at a separate joint hearing of the committee on dangerous drugs and the committee on public order and safety. All panel members agreed.

“The testimony of Marcelino is hereby dispensed with. Let him appear before the appropriate committee of the House subject to the referral to be made by the rules committee and the Majority Floor Leader,” said Umali.

Umali also disclosed that Marcelino had personally dropped by his office early this week to say that “he does not want to be subjected or to be a witness to this hearing.”

This was contrary to an earlier statement of Marcelino, who said he was ready to participate in any congressional hearing where he would only “side with the truth.” – Rappler.com