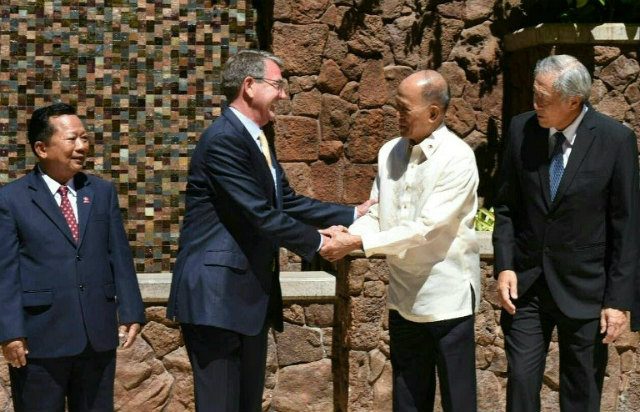 MANILA, Philippines – The United States on Saturday, October 8, denied it has received official notice from the Philippines suspending their joint patrols in the disputed West Philippine Sea (South China Sea).

This is contrary to the statement of Philippine Defense Secretary Delfin Lorenzana that the joint patrols “have been suspended for the time being,” and that Washington officials “know it already.”

“We have not received any formal notification from Philippine officials to alter any of our many areas of bilateral cooperation,” US embassy spokesperson Molly Koscina said when sought for confirmation on Saturday.

“We will continue to champion the peaceful resolution of disputes, respect for international law, including freedom of navigation and overflight and other internationally lawful uses of the sea related to those freedoms, and unimpeded lawful commerce in the South China Sea and around the world,” Koscina said.

She also said the US “will continue to consult” with their Filipino partners “to appropriately tailor our assistance.”

“We will continue to honor our alliance commitments and treaty obligations and expect the Philippines to do the same,” Koscina added.

In contrast, Lorenzana on Friday, October 7, said he has relayed the decision to suspend joint patrols to the commander of the US Pacific Command when he was in Hawaii at the start of this month.

Still, Lorenzana indicated he was still not 100% sure of Duterte’s final plans.

“They will not be conducted anymore until we clarify if he (Duterte) means what he says,” Lorenzana said.

The longtime allies began planning joint patrols under the Aquino administration, which had sought to attract a greater US military presence in the region to counter Chinese efforts to take control of the South China Sea. The two governments launched the joint patrols in April.

China claims nearly all of the sea, even waters close to the Philippines and other Southeast Asian nations, and has in recent years built artificial islands in the disputed areas that are capable of hosting military bases. (READ: Hangars prove China plan to ‘militarize’ islands)

Lorenzana said the US and Philippines had conducted two “passing through” maneuvers over the section of the sea claimed by Manila this year, but not actual “combat patrols.”

Duterte, who began his 6-year term on June 30, quickly shredded Aquino’s strategy on China, seeking cooperation and dialogue with Beijing while diluting the Philippines’ alliance with the United States. – with reports from Agence France-Presse/Rappler.com