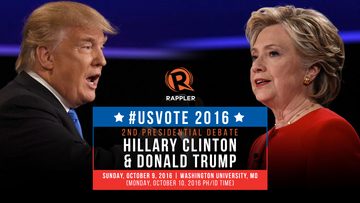 The week opens with another crucial debate between key contenders for the most powerful position in the world: the office of the President of the United States. Pundits say candidate Donald Trump desperately needs a strong debate performance this time. His   campaign has suffered a major setback from damaging footage of him making lewd remarks in 2015.

In the Philippines, former President Fidel V. Ramos, one of those who convinced Rodrigo Duterte to run for president, releases a critique of the way the new administration conducted itself in its first 100 days. The justice department continues to go after Senator Leila De Lima, placing her and 5 others in the immigration watch list. Peace talks between the Philippine government and the National Democratic Front continues to progress as both parties approve the peace pact frameworks. Finally, Rappler releases a 3-part series on trolls and their impact on public debate.

In a fiery second US presidential debate, Donald Trump dismissed his predatory remarks about groping women as “locker room talk,” and took a swipe at Hillary Clinton’s husband Bill over past sexual misconduct. Political observers have said that Trump desperately needs a strong debate performance.  His campaign faces its worst crisis, with about a dozen senators, a dozen members of the House of Representatives, and 3 governors – all Republicans – withdrawing their support. Watch the debate here. He was among those who convinced President Rodrigo Duterte to run in the May 2016 elections. In Duterte’s inaugural speech, he was the first person that the new president acknowledged and thanked. However, on Saturday, October 8, Former President Fidel V. Ramos said the Philippines is ‘losing badly,’ as the new administration became ‘stuck in unending controversies about extrajudicial killings of drug suspects and in his ability at using cuss-words and insults.’ Ramos notes key controversies in the first 100 days of the Duterte administration, and says the new president still has “enough time to correct the most serious flaws in our national leadership.” 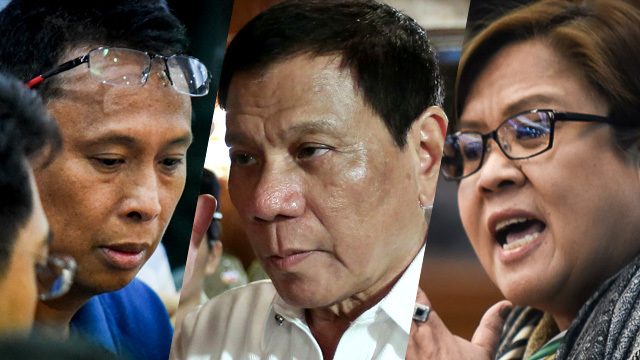 In an interview on Saturday, October 8, Senator Leila De Lima said former Police Officer 3 Engelberto Durano is a relative of President Duterte. Duterte’s late father Vicente Duterte hails from Cebu. His relatives include the influential Durano and Almendra families. Durano, De Lima said, was from Danao City, Cebu. Durano claimed that De Lima received money from alleged Cebu drug lord Jeffrey ‘Jaguar’ Diaz. The Department of Justice has issued an “extremely urgent” order to immigration agents to monitor flights, activities and travel of De Lima and 5 others for their alleged involvement in the illegal drug trade. Charges have yet to be filed against the 6 individuals. The Philippine government and the communist National Democratic Front (NDF) made headway at the negotiating table, agreeing on the frameworks of 3 “substantive agenda” that will complete the final peace pact to end Asia’s longest-running communist insurgency. Government chief negotiator Silvestre Bello III is optimistic, expecting a final peace agreement after one year. He says this allows them to devote 5 more years of President Rodrigo Duterte’s term to implementing the reforms agreed upon by both parties. Create false perceptions. This is what a network of combined real and fake accounts on social media can achieve in a matter of minutes. In 3-part series, Rappler reports on observations based on weeks of monitoring suspicious accounts connected to various online Facebook groups. The accounts share common practices, forming a nest that spreads and repeats lies and propaganda. Read part 1, part 2 and part 3 of this series. Out of 100 million people in the Philippines, 47 million have active Facebook accounts.  Unfortunately, there are incidents where healthy and informative debates turned toxic and hostile due to people who resort to personal attacks and even threats when faced with opinions different from theirs. How can you help achieve a safe and free social media? Rappler lists some do’s and don’ts.