Oct 12, 2016 3:37 PM PHT
Pia Ranada
Facebook Twitter Copy URL
Copied
The former president also advises President Duterte that better relations with China and Russia need not come at the cost of the Philippines' strong ties with the US 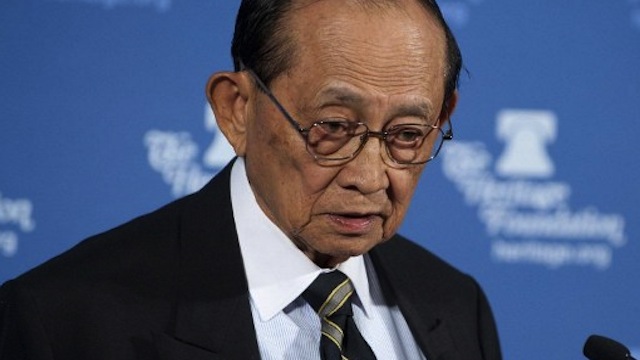 Former president Fidel Ramos posed the question when asked about his thoughts on President Rodrigo Duterte’s recent tirades against the two world leaders in an interview on ANC aired on Tuesday, October 11.

Duterte has called Ban and the UN “hypocritical” for calling him out on possible human rights violations linked to his drug war when the UN has failed to stop genocides in other countries. The Philippine President has also told Obama to “go to hell” for criticizing his bloody anti-drugs campaign.

Ramos said Duterte’s rants against these two leaders leave a bad taste in the mouth.

“When he cussed Secretary-General Ban Ki-moon of South Korea, many of us who are Korean veterans of the Korean War of 1950-53 felt hurt,” said Ramos, who was part of the Philippine Expeditonary Force to Korea (PEFTOK), the Philippine Army contingent of the UN forces that fought in the Korean War.

The UN leader, said Ramos, “was the foreign minister who made sure that the descendants of the Filipino veterans of the Korean War were given scholarships over the years.”

“Why is he hurting this guy?” asked Ramos, a retired military general.

He also came to Obama’s defense, advising Duterte to also consider the similarities between him and the US president.

Duterte had slammed the US and Obama for questioning the killings linked to his drug war when police shootings of black men in the States is rampant.

Ramos also cautioned against Duterte threatening to “break away” from the US, a traditional ally of the Philippines. (READ: Duterte stuck in ’20th century’ thinking – FVR)

Laudable efforts to strengthen relationships with other countries like China and Russia don’t have to come at the cost of ties with allies, he added. (READ: The Philippines’ pivot to China)

“It’s completely possible to make new friends, make them better friends than older friends, but you must not cut off your friendship with those who are already your friends because, as I said, we must lead to a world that is more cooperative, more closely connected,” said Ramos.

Amidst Duterte’s pronouncements that the Philippines pursue an “independent foreign policy,” Ramos said foreign policy should not ignore the fact that countries are much more interconnected now than ever.

Duterte previously declared he would stop US-Philippines joint military exercises to appease China, with which the Philippines is locked in a maritime dispute. (READ: Philippines tells US no more joint sea patrols)

The Philippine President has also said he wants US troops in Mindanao to pull out, claiming their presence heightens tension in the region.

In a recent speech, Duterte clarified that he did not want to end the Philippines’ “military alliances” with the US but in the same breath wondered whether it served any use. – Rappler.com