UN expert seeks ‘freedom of inquiry’ in probe of killings 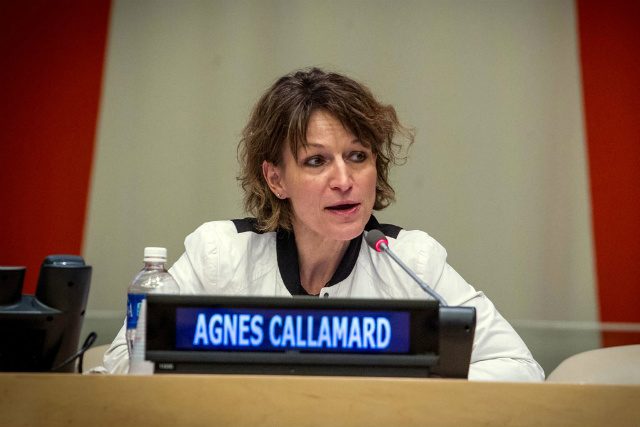 In an email to Rappler, Callamard said she is “waiting for a confirmation through official channels and for the letter, which I have not yet received.”

“I welcome the invitation from the government assuming this includes essential guarantees (freedom of inquiry and movement, and non-retaliation), and enables engagement with the authorities and other key actors and stakeholders concerned with the recent wave of alleged extrajudicial executions,” Callamard said.

She added that she will wait for the Philippine government’s official letter “to review it and discuss and determine with the Philippine authorities the date and scope of the mission.”

The Philippine Office of the President confirmed on Wednesday that the letter to Callamard “was released last September 28, 2016” through the Malacañang Records Office.

The invitation came with conditions such as allowing Duterte “to propound his own questions” to Callamard, according to the letter signed by Executive Secretary Salvador Medialdea.

The Palace said allowing Duterte to pose questions to Callamard is part of “due process.”

Duterte is “entitled to know the motive for the investigation, and why the focus is on the Philippines when there are other nations responsible for the death of innocent and defenseless individuals elsewhere in the world,” Medialdea said.

Medialdea also said the Philippine government expects Callamard “to look into the circumstances surrounding the killing of our policemen during legitimate drug operations.”

“That way, your picture of the enormity and gravity of our problem, and the audacity of drug personalities, can be placed in accurate perspective,” the Executive Secretary told Callamard.

Separately on Wednesday, a UN committee urged the Philippines to stop extrajudicial killings in the country, and warned that declarations by high-ranking officials could “legitimize” violence against drug users. – Rappler.com