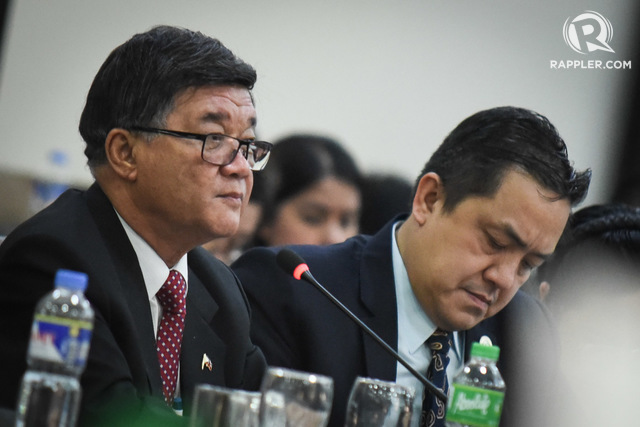 MANILA, Philippines – The Department of Justice (DOJ) on Wednesday, October 12, refuted the claim of Senator Leila de Lima that the agency has no jurisdiction over the drug trafficking complaint filed against her and 7 others.

The complaint, De Lima earlier said, should have been filed with the Office of the Ombudsman instead, even calling the DOJ’s brand of justice as “fake” under her successor at the department, Secretary Vitaliano Aguirre II.

The Volunteers Against Crime and Corruption (VACC) filed a complaint, accusing De Lima and 7 others for conspiring to allow the spread of illegal drugs in the New Bilibid Prison.

If found guilty, De Lima and her co-accused may be meted with life imprisonment and a fine ranging from P500,000 to P10 million.

Aguirre explained, however, “The DOJ has concurrent jurisdiction with the Ombudsman to hear in preliminary investigation cases filed against government officials that are cognizable by the Sandiganbayan.”

He added that, as the VACC chose to file the complaint before the DOJ, then the department has no choice but to conduct a preliminary investigation.

Aguirre also assured De Lima of a fair resolution by DOJ prosecutors of the criminal complaint against her.

He also urged the senator to present a valid defense against the accusation against her, as opposed to stating general denial regarding the issue. At a press briefing, Aguirre said such general denials will not prevail over the positive testimony of inmates and other government witnesses.

He said De Lima should answer accusations made by National Bureau of Investigation (NBI) intelligence agent Jovencio Ablen Jr and former Director Rafael Ragos. They had claimed they delivered P10 million in drug money to De Lima and her driver and alleged boyfriend, Ronnie Dayan.

Aguirre added that De Lima should address the issue about her supposed relationship with Dayan, as well as the accuations of high-profile inmates regarding collecting drug money for her to finance her senatorial bid.

In a statement, Ferdinand Topacio, lawyer of the VACC in this case, agreed with Aguirre’s opinion. He said the move to question the DOJ’s jurisdiction over the VACC complaint “shows her desperation and her lack of knowledge of legal processes.”

Topacio cited a 2004 decision of the Supreme Court, which gave the DOJ concurrent jurisdiction with the Ombudsman on cases against public officials involving violations of penal laws.

Topacio added De Lima cannot invoke a 2012 memorandum of agreement between the DOJ and Ombudsman, as “jurisdiction is conferred by law and cannot be the subject of agreement. As stated, Section 15(1) of Republic Act 6770 (the Ombudsman Act) did not vest exclusive jurisdiction over cases involving public officials in favor of the Ombudsman, and did not divest the DOJ of its general jurisdiction to conduct preliminary investigation of cases.” – Rappler.com