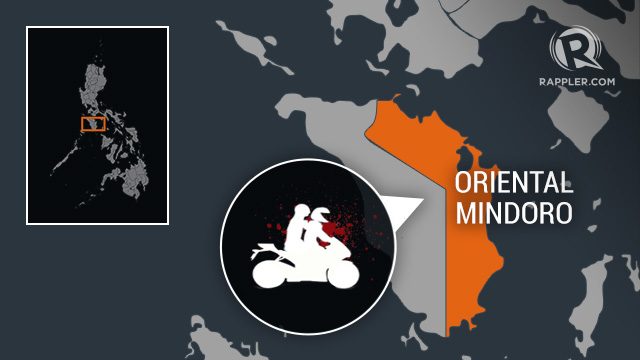 Pimentel, a member of the PNPA class of 2009, is from the Oriental Mindoro Police Public Safety Company while Almeranez, who ranked fifth in the PNPA class of 2013, is chief of the Socorro town police office. Almeranez was recently awarded by PNP chief Director General Ronald dela Rosa himself during a recent visit to Calapan City.

The two officers supposedly gunned down Luz on Sunday, October 8, in front of her house in Gloria town, Oriental Mindoro.

Pimentel and Almeranez, according to the news report, were riding a motorcycle and in civilian clothes when they shot Luz close to midnight on Sunday. A police mobile team later chanced upon the 2 cops after getting a call from a barangay captain. They were supposedly seen fleeing the crime scene.

Police chased down the two young officers up to the neighboring town Pinamalayan, where one of the suspects started shooting. There, they were wounded and cornered, according to the news report.

Pimentel was supposedly wearing a “bonnet and hoodie jacket” while the younger officer was wearing a “facemask and a wig to disguise himself.” A 45-caliber pistol and .38 caliber pistol were seized from the 2.

Almeranez was recently awarded by PNP chief Director General Ronald dela Rosa himself during a recent visit to Calapan City.

PNP spokesman Senior Superintendent Dionardo Carlos, speaking to reporters on Thursday, October 13, commended the Oriental Mindanao police for its “swift actions taken” in filing charges against its own men.

“We look at this as a crime or murder. Kasi pag sinabi na nating EJK, titignan natin kung papasa siya sa EO 35  (When we say it’s an extrajudicial killing, we have to check if it’s in line with EO 35). Let’s look at this as a charge of murder… let us not label this as an EJK,” he added.

Carlos also said the “incident does not speak for the entire organization.”

The incident occurred amid allegations of killings by state operatives in the context of President Rodrigo Duterte’s “war on drugs.”

The PNP has denied these claims, clarifying that almost all of its anti-illegal drugs police operations followed the proper procedure. Suspects who were killed, police say, fought back or threatened the lives of police. – Rappler.com