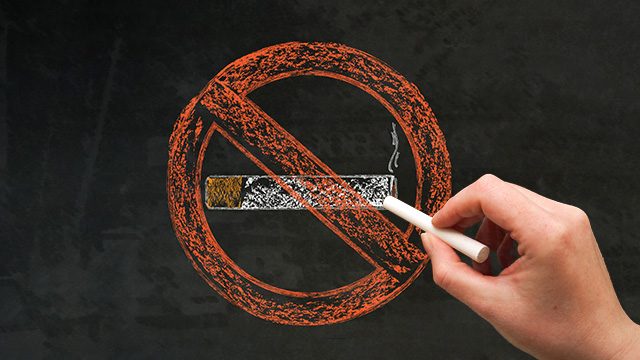 Facebook Twitter Copy URL
Copied
The implementing rules and regulations will identify what areas are considered public places. It will also provide details on the sanctions or penalties for violators.

MANILA, Philippines – The Department of Health (DOH) on Thursday, October 13, said it already has a draft of the implementing rules and regulations (IRR) of the proposed nationwide smoking ban in all public places – an executive order (EO) now awaiting the President’s signature.

“As soon as the President signs the executive order, we are ready to come out with an IRR, and within 15 days of publication, that is already implementable,” Health Secretary Paulyn Ubial told reporters on the sidelines of the 2nd Public Health Convention on Mental Health.

The EO has two key provisions:

The IRR, Ubial said, will identify what areas are considered public places. It will also provide details on the sanctions or penalties for violators of the EO, which is patterned after a Davao City ordinance.

Penalties will fall on establishments and not on individuals, Ubial explained, since smokers “are victims of the tobacco industry.”

“[In Davao] for example, if you’re a restaurant and you allowed people to smoke inside the restaurant, you will be fined P10,000,” she explained.

Ubial added: “They [smokers] are addicted to tobacco so they can’t stop, they have to do it. But establishments have to make sure the non-smokers are protected from the ill effects of secondhand smoke.”

But who will make sure the EO is implemented properly?

According to Ubial, it will be up to the local government units to decide whether to create a separate task force, or to let the police or health workers monitor implementation.

“In Davao, we had an anti-smoking task force. It’s a different group from the police or from the development authorities,” she explained.

The health department hopes President Rodrigo Duterte will issue the EO by the end of October, or before the full implementation of the Graphic Health Warnings Law on November 4. – Rappler.com