PH condoles with Thailand on passing of King Bhumibol 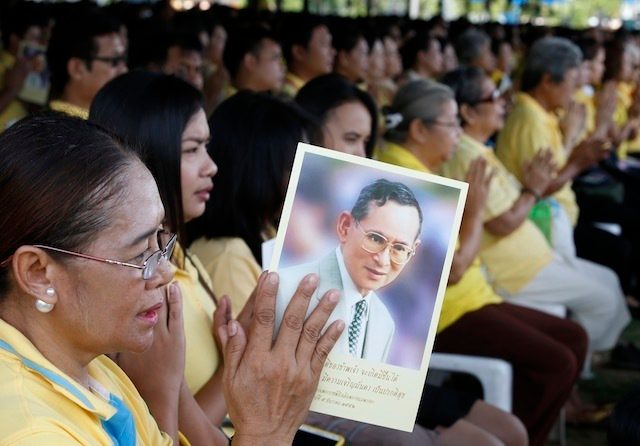 Facebook Twitter Copy URL
Copied
Malacañang, on behalf of the Filipino nation, extends its condolences to the king's family and the people of Thailand

MANILA, Philippines (UPDATED) – Malacañang Palace on Thursday, October 13, conveyed its condolences to the people of Thailand after the death of Thai King Bhumibol Adulyadej.

“On behalf of President Rodrigo Duterte and the Filipino people, we join the rest of the Association of Southeast Asian Nations (ASEAN) in mourning the passing of Thai King Bhumibol Adulyadej,” said Presidential Spokesman Ernesto Abella in a Palace statement sent to media on Thursday night.

Earlier that day, Bhumibol died at the age of 88, ending his 70-year reign.

The Palace hailed the king as “the guiding hand behind the emergence of Thailand as one of the most progressive countries in the whole of Asia.”

“We extend our deepest condolences to his family and all those he left behind,” reads the statement.

“At the same time, we wish his son and heir apparent, Crown Prince Maha Vajiralongkorn, all the best as he assumes the duties and responsibilities as Thailand’s new king,” said Abella.

The Palace expressed confidence that the new king will “enhance Thailand’s stature in the region and help the country achieve lasting peace and continued economic and social progress.” – Rappler.com