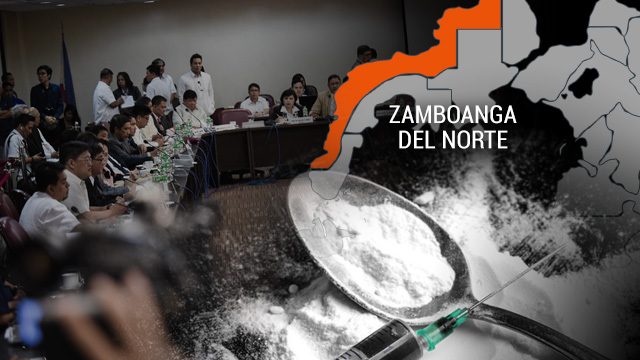 Facebook Twitter Copy URL
Copied
The House committee on dangerous drugs will hold public hearings in the province, following the testimony of a convicted cop at the congressional inquiry into the drug trade at the New Bilibid Prison

ZAMBOANGA DEL NORTE, Philippines – The House committee on dangerous drugs will head to this province to hold public hearings on the drug trade here and the alleged involvement of some local officials in the illegal activity.

The move was spurred by the testimony of convicted drug lord Engelbert Durano, a former police officer, at the House inquiry into the illegal drug trade in the New Bilibid Prison under the previous administration.

In his testimony before the House committee on justice on October 10, Durano alleged that Police Chief Inspector Joenel Pederio, former police chief of Leon Postigo town in Zamboanga del Norte, was involved in the drug trade.

Durano claimed that Ronnie Dayan – Senator Leila de Lima’s driver and bodyguard at the time – asked him to convince alleged drug lord Jeffrey “Jaguar” Diaz, to supply the province with shabu through Pederio. Diaz was killed in a police operation in Las Piñas in June.

Durano is among the convicts granted immunity from suit for their testimonies at the House probe into the drug trade at the Bilibid when De Lima was justice secretary. He is a member of the so-called Bilibid 19, high-profile inmates who were moved to a National Bureau of Investigation (NBI) facility following a raid led by De Lima on Bilibid in December 2014.

Durano’s testimony contradicted the assessment of the police and the Philippine Drug Enforcement Agency (PDEA) that there are no drug lords in the province, that the drug trade there is minimal, and that the supply of shabu came mostly from Ozamiz City.

In previous privilege speeches, Jalosjos alleged that the proliferation of the drug trade in Zamboanga del Norte involved the police and Governor Roberto Uy.

Aside from Pederio, Jalosjos alleged that another cop, Senior Police Officer 2  Roy Vertudez coddled big-time drug pushers, one recently killed by a sniper on his way to the court, detained at the Dipolog City jail. The lawmaker alleged that Vertudez is protected by the governor, which Uy denied.

Asked about the allegations of Jalosjos and Durano, Senior Superintendent Edwin Wagan, the provincial police director, said he had no information about it.

Reacting to Wagan’s statement, Jalosos told Rappler on Friday, October 14, “The entire country already knows about the illegal drug trade in Zamboanga del Norte, why is Wagan still saying until now that he doesn’t know a thing?”

(But that’s the truth. He can say that our intelligence is weak, but we really have no information regarding the involvement of the governor and Pederio in the drug trade.)

Jalosjos said he cannot accept Wagan’s answer, and cited the assessment of “some Cabinet members” about the “underperformance” of the police, PDEA, and NBI in the province

“If Wagan still insists he doesn’t know what’s going on, it would only lead to one thing – either he is incompetent or he is ignorant,” the lawmaker said.

Jalosjos added that he hoped Wagan would investigate Vertudez and Pederio. “He can ask me to work with him. The testimony of the people I’m holding can really expose everything,” he said.

Wagan said he has not ordered a formal investigation on Pederio and Vertudez because there were no complaints. “I am conducting my own investigation, but it’s only for our intelligence,” he said.

Pederio has been relieved of his post while Vertudez was reassigned from the Dipolog Police Office to the Zamboanga del Norte Police Provincial Office. – Rappler.com