Duterte on smoking ban: No room for smokers in buildings 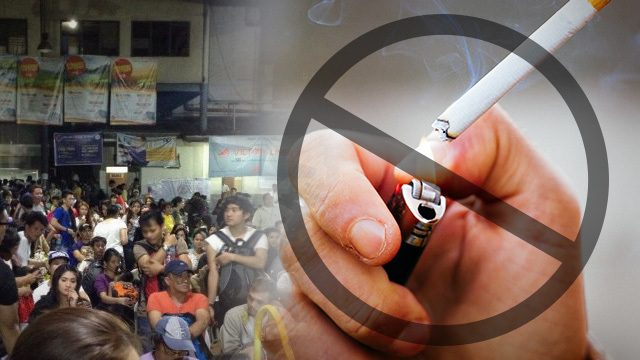 Facebook Twitter Copy URL
Copied
'I've always been against even building a structure inside just to accommodate smokers. That ain't the way,' says the President

MANILA, Philippines – Under an upcoming executive order (EO) banning smoking in public places, you can say goodbye to smoking rooms in buildings used by the public.

This is what President Rodrigo Duterte revealed about the EO he is about to sign. (READ: DOH hopes EO on smoking ban out by end-October)

“If you want to smoke, find a place where it is allowed. Now, I’ve always been against even building a structure inside just to accommodate smokers. That ain’t the way,” he said on Sunday, October 16, before leaving for Brunei.

“It must be out[side]. It must not be in an enclosed cubicle inside the building. That is not good enough,” said Duterte.

The EO will be patterned after the Davao City smoking ban which Duterte himself implemented when he was mayor.

“It will be followed and the implementation will follow the Davao experience,” he said. (READ: DOH ‘ready’ with implementing rules of proposed smoking ban)

Duterte insists that there is “no debate” on the detrimental health effects of cigarette smoking.

He himself suffers from Barrett’s esophagus due to his many years as a smoker.

“The stats will show, there is no debate on that. They will die of cancer if they continue to mess up with nicotine,” he said.

The smoking ban EO draft was prepared by the Department of Health.

As for a possible executive order banning firecrackers, Duterte said he is still studying it because of possible repercussions on the local industry.

“I am going to have the Cabinet meeting next… I will need the Cabinet to decide,” he said. – Rappler.com

Image of a young man smoking a cigarette from Shutterstock