Oct 19, 2016 2:43 PM PHT
Pia Ranada
Facebook Twitter Copy URL
Copied
'We're taking advantage of the opportunity of making sure that the other aspects of our relationship with our neighbor, China, will be pursued,' says Foreign Secretary Perfecto Yasay Jr 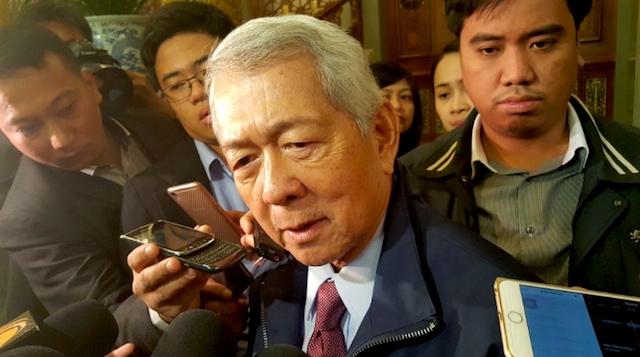 BEIJING, China – Aside from leaving out the Philippines’ sea dispute with the regional giant in his talks with Chinese President Xi Jinping,  President Rodrigo Duterte will also not raise Philippine fishing rights in the West Philippine Sea (South China Sea) during their meeting set on Thursday, October 20.

Asked if Duterte will bring up fishing rights of Filipinos in the disputed sea when he speaks with Chinese officials, Yasay said, “No, there is nothing, nothing about that.”

Weeks ahead of his China trip, Duterte had affirmed that he would demand that China respect the rights of Filipinos to fish in the West Philippine Sea during his Beijing visit. Even with the Philippine victory against China in their sea dispute, the Chinese Coast Guard has continued to shoo away Filipino fishermen from their traditional fishing grounds in the area.

Before he attended the Association of Southeast Asian Nations (ASEAN) Summit in Laos early September, Duterte had said that he would raise the issue of Filipino fishermen’s rights to earn a livelihood in the West Philippine Sea  with Chinese officials at the sidelines of the summit. The meeting, however, did not take place.

As his state visit neared, the President softened his stance and said he would not make any “hard impositions” on China during his trip.

Responding to questions, Yasay said Duterte’s discussions with Xi would not include a possible joint exploration with China in the disputed sea, a venture that Duterte had raised on several elections, even during the campaign.

“We are not talking about joint exploration. We are just simply talking about how we can improve ties with China without eroding or compromising our disputes,” Yasay said.

On Wednesday, Yasay said talks in China will “just” be about trade and economy.

He also denied that any military alliances will be forged during the state visit. The question stemmed from Duterte’s recent announcement that he was open to holding joint military exercises with China and Russia, as he wanted the Philippines to end its annual war games with its oldest ally, the United States.

“We are not expecting any alliances in an equal manner in carrying out our independent foreign policy,” said Yasay.

Duterte’s state visit to China, he said, was just a  way of “treating our friends in equal manner.”

The Foreign Secretary emphasized that the state visit would focus on issues other than the sea dispute. (READ: PH-China sea dispute may not be ‘solved in our lifetime’ – Yasay)

“We’re taking advantage of the opportunity of making sure that the other aspects of our relationship with our neighbor, China, will be pursued,” he said.