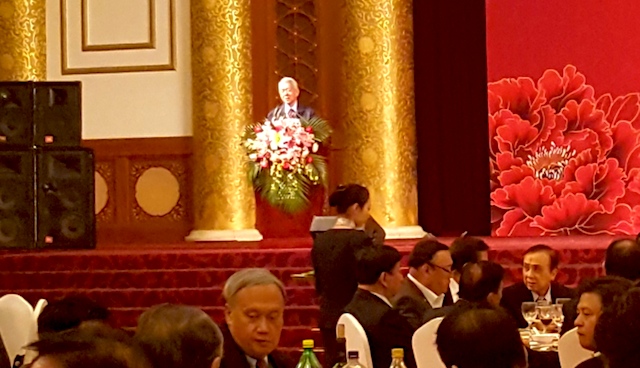 BEIJING, China – Even with the Philippines’ victory in the sea row with China, Foreign Secretary Perfecto Yasay Jr  told Filipino and Chinese businessmen here that he has no “false hopes” that the West Philippine Sea (South China Sea) dispute between their countries would be fully resolved anytime soon.

“I do not have any pretenses or false hopes that our disputes might take many years, perhaps not even in our lifetime, to fully resolve,” Yasay said in a gathering with Filipino and Chinese business at a Beijing hotel on Wednesday, October 19.

He made the statement on the eve of the bilateral meeting of President Rodrigo Duterte and Chinese President Xi Jinping. The two leaders are not expected to discuss anything related to the dispute, following the “soft” approach taken by the new administration on the issue. (READ: Duterte won’t raise PH fishing rights in Beijing – Yasay)

Yasay added, however, that the likelihood that the dispute will drag on “should not be an impediment or barrier in fostering our closer ties with each other.”

He repeated earlier statements that the relationship between China and the Philippines should not be limited to the maritime dispute, the same position adopted by the previous administration even after it had taken China to court over the sea row.

“The sum total of our relationship between the Philippines and China is not limited to the South China Sea alone. We have other and much bigger aspects of our relationship that must move forward regardless of our differences and our disputes,” he said.

Yasay was apparently referring to the economic aspect of bilateral ties with China, the primary focus of Duterte’s 4-day state visit that began Tuesday night.  (READ: At a glance: Duterte’s state visit to China)

Duterte’s state visit had raised hopes in the country and the region that officials of the two countries would finally talk about the dispute following an international arbitral tribunal ruling that affirmed the Philippines’ claim in the West Philippine Sea against China.

Chinese leaders want to avoid the “divisive” ruling while Duterte has said he would raise the ruling at a “proper time.”

Yasay also assured the businessmen that stronger ties with China won’t compromise the Philippines’ relationship with other countries.

“Our closer ties with China is not going to erode our close ties with the rest of our allies and traditional partners and the rest of the members of the international community,” he said.

The President however, had indicated that his envisioned “independent foreign policy” seeks to distance the Philippines for its oldest and most powerful ally, the United States.

Weeks before the state visit, Duterte had gone on curse-laden rants against the United States, a longstanding military ally, economic partner, and source of official development assistance of the Philippines. He had said that the Philippines would no longer hold its annual joint military exercises with the US, but would consider holding war games with China and Russia.

On Wednesday, Yasay emphasized that Duterte’s intention to pursue an independent foreign policy is to ensure that the Philippines is treated as a co-equal of its allies.

“But we will not hesitate to take action to protect the paramount national interests if other countries will look down at us as somebody that will be always be subservient to their national interests,” said Yasay.

Duterte’s foreign policy – which steers the Philippines away from the US and towards China – has been criticized even by the President’s mentor, former president Fidel Ramos, who urged him to not to burn bridges with the long-time Philippine ally. (READ: FVR defends Obama, Ban Ki-moon from Duterte rants)  – Rappler.com