Oct 21, 2016 3:53 PM PHT
Patricia Evangelista
Facebook Twitter Copy URL
Copied
Fifteen weeks after the declaration of a war on drugs, at least 12 people are killed between dusk and dawn one Monday in October

The first corpse of the beginning of the working week appeared at twenty minutes past seven in the evening. They called him Boy Demonyo.

Lester Vince Sacabon, alleged drug dealer, was heading home from a bingo game when he was gunned down by men on motorcycles. He never made it past his front door. Alias Boy Demonyo was found sprawled outside Number 71 Langka Street in Marikina City.

The body count went up in quick succession.

At 9:45, a 48-year-old suspected drug user named Conrado Marcos was killed by four armed men on motorcycles at the corner of Julian Felipe in San Miguel, Caloocan. At 10:20, 24-year-old John Patrick Marcelo, whose name police listed on the drug watch list, was killed while walking down Atis Street in Pasig. At 10:30, an alleged drug user known only as Petus was found dead ten feet away from the door of the female rest room of a 7-11 in Parañaque City, beside the vending machine dispensing five-peso sanitary napkins.

It was Monday night. By the time the sun rose the next morning, a dozen new corpses were added to the more than 3,000 bodies collected in the 15 weeks of the war against drugs.

ALIAS PETUS. The body of an identified man found sprawed at the back of a Parañaque convenience store. Photo by Carlo Gabuco

The 7-11 along the Parañaque Coastal Road was still pulling in a brisk business at half past ten Monday. Cans of coffee with complementary straws were still being sold, along with packets of gummy bears, in spite of the dead body bleeding into the back lot.

The security guard told a reporter he heard the gunshots. He said the assailant jumped into the back of a waiting motorcycle. He said he didn’t know the victim’s name – except for an alias, Petus – but added that the dead man used to be a bus driver who would hang around the back lot at night shooting up shabu.

It was not the only killing in Parañaque on Monday night, not even the only killing outside of a 7-11 convenience store. Less than an hour after Petus was found, another man was shot just outside the glass doors of a 7-11 in Baclaran, a ten-minute drive past the red-lit karaoke bars of the Parañaque Airport Road.

His name was Edwin Mendoza Alon-Alon. His friends called him Bato. He was a barker for passenger jeepneys, and was standing two steps beneath the 7-11’s glass doors when he was shot at the side of the head by a man in a hooded gray sweatshirt.

The killer tossed down a white piece of cardboard scrawled with “pusher” in capitals. Then he walked away.

He walked, said the security guard, who was standing inside the convenience store when he heard the shots. The clerks agreed. The killer walked away from the body. He did not run. He turned the corner and kept walking, until he disappeared.

It was a terrifying moment, they said, but it was not as much a shock as the first. Just a week earlier, another man was killed in front of Willie Mart, their competitor across the street.

ANOTHER MONDAY. A crowd of onlookers stand around the body of Edwin Mendoza Alon-Alon, alias Bato, outside a convenience store along Airport Road, Parañaque. Photo by Carlo Gabuco / Rappler

When the village watchmen rode in, they covered Bato’s body with flattened Vitamilk cartons. The blood seeped out from under his arm, followed the painted white line of the pedestrian crossing.

The scene of the crime operatives circled the sachet of shabu with chalk. They posted the bright yellow numbers beside the five bullet casings. They stripped the cardboard off Bato’s body. Blood leaked out of his mouth and ears in rivulets, thick clots filling the bottom of the blue baseball cap that fell on the ground.

They emptied his pockets onto the road – small bills folded in a pile, a handful of change, a plastic phone held together by rubber bands, a lighter. They took the phone, asked for a plastic bag from a store clerk, and told Bato’s sister she could take the rest. She knelt beside the puddle of her brother’s blood, laying coins and bills carefully into her brother’s soiled handkerchief.

Bato was the eldest in the family. He was slow, said his sister, was born two months too early and had trouble reading and writing. He was a happy man who liked basketball even if he wasn’t any good. He never ate chicken, stuffed himself with pork, and was pleased to be offered odd jobs. He washed dishes. He swept floors. He threw out the neighborhood trash. When there was nothing to do he played barker across the 7-11 for the jeepney drivers waiting for fares.  He would take anything in exchange, a cup of coffee, a meal, maybe a ten or a twenty.

AFTERMATH. The family of Edwin Mendoza Alon-Alon accompany his body on the way to a local morgue. Photo by Carlo Gabuco / Rappler

At 2 am, across town, two men were killed in a buy-bust operation along Vision Street in Sta. Cruz, Manila. The police said both men were on the local watch list. They said they fought back. Two .38 caliber guns were reported to have been recovered, along with sachets of marijuana and drug paraphernalia.

They called the first man Commando. The second man was a father of three. Virgilio Albay, the man his mother called Junior. He worked at the flower market and lived in a makeshift room behind a salon at Number 2063.

It was his youngest, 12-year-old Gerry, who picked his way into the crime scene at 4:16 am, a little more than two hours after his father was killed. The yellow tape had been lowered. The bodies had been loaded. The cops had ridden off in their mobile, and neighbors were slowly leaving their homes to gossip on the street. Gerry didn’t live with his father. He stayed with his grandmother Amada instead, sleeping inside a jeep with his two older siblings. It was the way it had always been ever since Gerry’s mother abandoned the family and Junior spiraled into drugs and depression.

Gerry was at the street corner when he heard the seven gunshots. He was told someone had died. He came back to see what happened, and to pick up the bicycle he had left the last time he visited. He slipped inside the room barely big enough for a bed.

A man’s voice cut through the quiet. Junior’s neighbor down the alley was calling out from the second floor.

So Gerry stepped out, stood on the pitted courtyard, and looked down at the blood spattered on the broken stone.

“He’s not here. He’s supposed to be sleeping here.”

“Then your Papa must have been the one they shot.” The man was matter-of-fact. “You better tell your grandma.”

At least 12 people were killed before dawn in seven incidents on Monday, October 17.

Four of them were shot in police operations. Eight were executed by unidentified killers. Eleven were men. All of the twelve were connected, one way or another, to the use and sale of illegal drugs.

The dead include a 50-year-old village councilor on the drug watch list, a pair of brothers who allegedly fought back against police at a buy bust operation, an unidentified man rumored to be “involved in drug activities,” and a man named Junior whose 78-year-mother sat quiet at the back of a jeepney in Sta. Cruz Manila.

At 4:40 in the morning, Amada Albay, small and white-haired, had just discovered her son was dead. Gerry had come home crying.

Junior took drugs, she said, but the shooting wasn’t his fault. Couldn’t be, she said. He didn’t own a gun. She does not know how they will bury him, or if they can afford to collect his body. She had someone run get John Paul, Gerry’s older brother, to tell him to follow his father’s body.

John Paul came trudging down the street from the flower market, a skinny 17-year-old who looked no older than fourteen. He walked to his grandmother. He said nothing when his grandmother pulled him into a hug, not even when she let him go. He stood, shoulders rigid, arms tight against his side, hands curled into fists. His eyes had gone blank.

It was Tuesday morning, and his father was dead, the last of a dozen to die one night in October. – Rappler.com

(Editor’s note: All quotations have been translated to English).

More stories from this series: 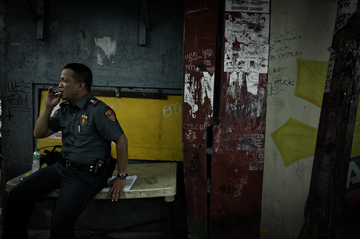 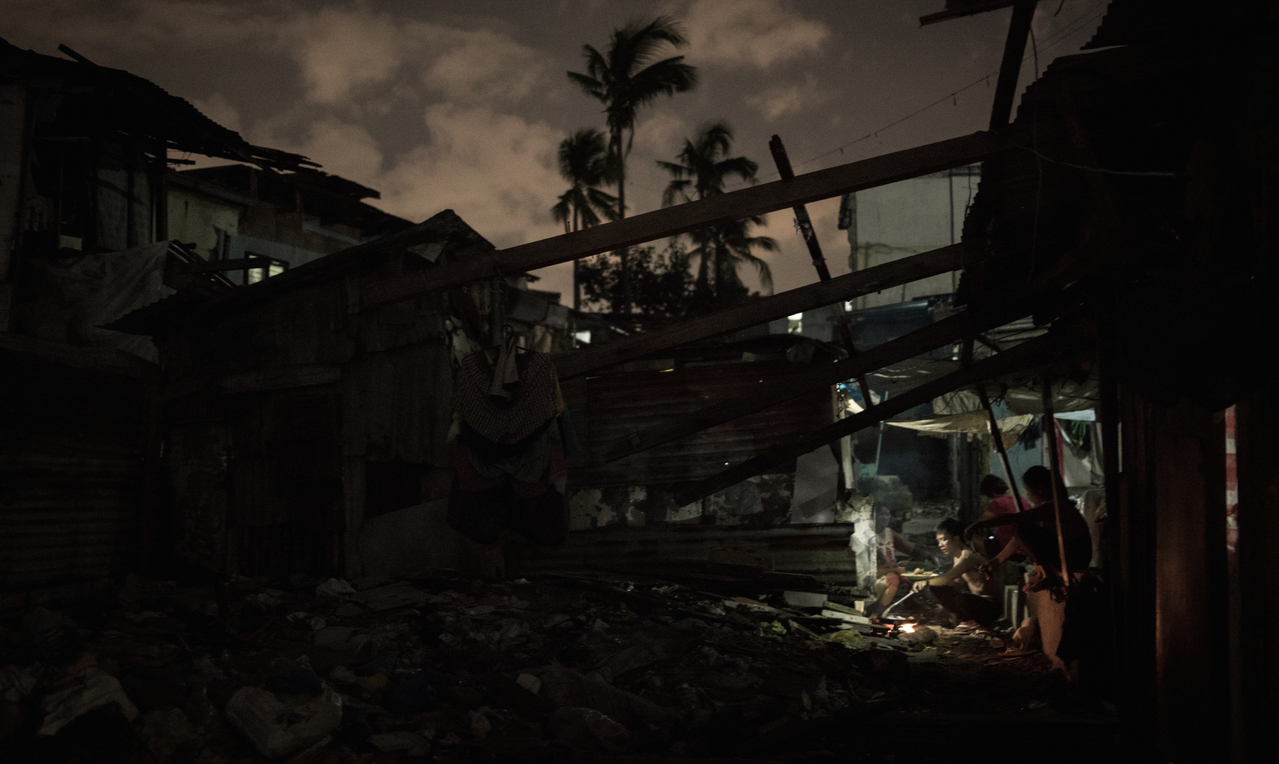 According to the narrative now held acceptable under the administration of Rodrigo Duterte, Jhay Lord Clemente deserved to die. 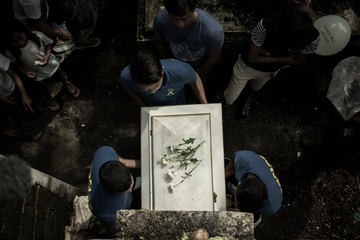 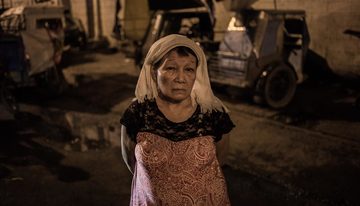 SAFE FOR THE GOOD