Duterte says he will not sever U.S. ties

Oct 22, 2016 12:38 AM PHT
Rappler.com
Facebook Twitter Copy URL
Copied
On whether or not his 'separation' will affect defense agreements with the US, Duterte says 'maybe' and that he plans to consult with military officials first 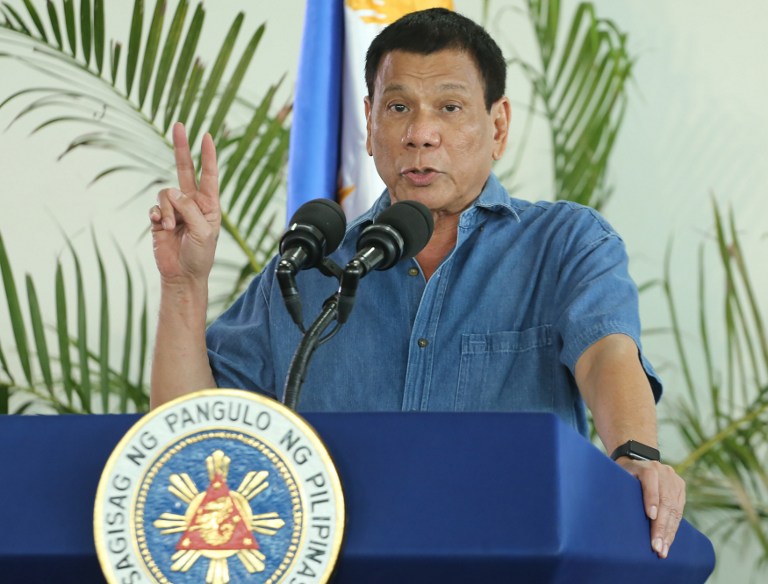 DAVAO, Philippines (UPDATED)  – Philippine President Rodrigo Duterte said on Saturday, October 22, he would not sever his nation’s alliance with the United States, as he clarified his announcement that he planned to “separate.”

“It’s not severance of ties. Severance is to cut diplomatic relations. I cannot do that. Why? It’s for the best interests of my country that we maintain that relationship. Why? Because there are many Filipinos in the US, Americans of Filipino ancestry,” Duterte told reporters in his hometown of Davao after returning from China.

The firebrand leader signaled on Thursday, October 20, during his 4-day state visit to Beijing that he announced a “separation” from the United States in both military and economic aspects in favor of China and Russia.

He explained that this “separation” merely means to “chart another way” in terms of foreign policy from the Western power.

“Separation of my foreign policy, that it need not dovetail the foreign policy of America. That’s what I meant actually…Separate is just to chart another way of doing it,” he said.

But asked if American companies like business process outsourcing companies should worry about the economic aspect of the “separation,” Duterte said, “I worry that they would not get out of this country, that you have to force them. That is my worry.”

On whether or not his “separation” would affect defense agreements with the US like the Enhanced Defense Cooperation Agreement (EDCA), Duterte said, “Maybe.”

But he intends to speak with the military leadership about this first.

“I have to consult the military, the police, and everybody because, at the end of the day, it is all security,” said Duterte. (READ: US says EDCA is binding, reminds PH of aid after Yolanda)

Asked about his hopes to further ties with China and Russia, Duterte said this could take the form of a “military alliance” or an “economic bloc.”

During the Philippines-China Trade and Investment Forum, Duterte said to Chinese government officials and businessmen at the forum, “So, please, you have another problem of economics in my country. I am separated from them so I will be dependent on you for a long time.”

“America has lost. I’ve realigned myself in your ideological flow and maybe I will also go to Russia to talk to (President Vladimir) Putin and tell him that there are 3 of us against the world: China, Philippines, and Russia. It’s the only way.” (READ: Duterte’s tough talk and what it could mean for US, EU investments)

Until Duterte took office on June 30, the Philippines had been one of the United States’ most important and loyal allies in Asia, and a key to President Barack Obama’s “pivot” to the region.

But since becoming president, Duterte has done a dramatic foreign policy U-turn that has baffled US leaders. (READ: Ex-DFA chief on Duterte US policy: ‘National tragedy’)

US State Department spokesman John Kirby said on Thursday that the United States would seek clarification from the Philippines about the “separation” remark.

“It’s not clear to us exactly what that means in all its ramifications,” he said. (READ: By ‘separation’ from US, Duterte meant ‘rebalance’ to Asia – Pernia)

Kirby also indicated Asian governments were growing increasingly nervous about Duterte, who has been fiercely criticized in the West for a war on crime in which thousands of people have been killed.

“It isn’t just the United States who is baffled by this rhetoric. We have heard from many of our friends and partners in the region who are likewise confused about where this is going,” he said.

On Saturday, Duterte launched another tirade against the US for criticizing his war on crime.

Duterte also said he would never visit the US.

“Not in this lifetime,” he said, as he heaped praise on Russian President Vladimir Putin as well as celebrating billions of dollars of Chinese deals secured while in Beijing. – with reports from Pia Ranada/Agence France-Presse/Rappler.com