Rebellion not main cause of violence in ARMM 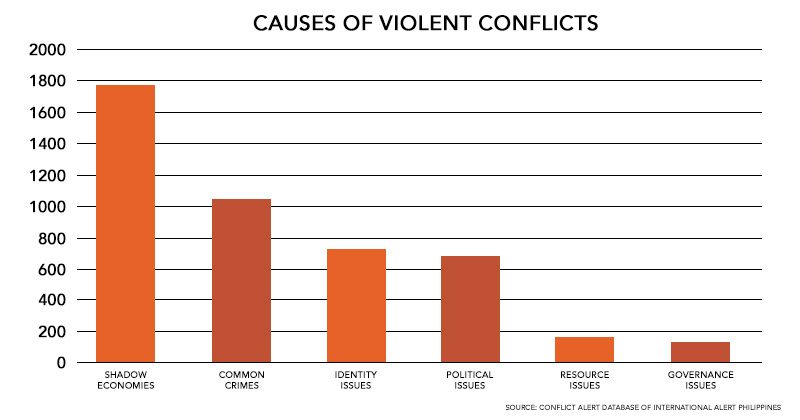 Facebook Twitter Copy URL
Copied
Conflict Alert, a free online database now covering 15 provinces in ARMM, is relaunched. It shows that common crimes and shadow economies are the top causes of violence in the region.

MANILA, Philippines – Common crimes and shadow economies are the top causes of violence in provinces in the Autonomous Region in Muslim Mindanao (ARMM), particularly in urban areas, years of data show.

Identity issues such as rido and resource issues such as land disputes are the 3rd and 4th causes, respectively, while political issues such as rebellion ranked 5th, based on International Alert Philippines data covering the years 2011 to 2015.

Political issues are the main causes of violent deaths, however, as most of the violence arising from common crimes and shadow economies do not lead to deaths.

“If one looks at the data, there are some things that ought to change our perceptions about Mindanao. The lumad issue should figure in identity and resource issues but it is not the major vector of violence. If one looks at insurgency, they’re part of political issues, a very small porportion when it comes to number of reported incidents,” said Lara, who presented the pioneering data on Mindanao violence on Tuesday, October 25, at the World Bank office in Taguig City.

ARMM is a major site of rebellion and insurgency, criminal violence, and shadow economy-based conflicts.

The ARMM and the Office of the Presidential Adviser on the Peace Process (OPAPP) will get bigger budgets next year, 2017, to fund more development programs in the region.

“There is an assumption that development programs will support peace and stability. We now need to generate more evidence for what types of program and which type of conflicts,” said Matt Stephens, World Bank senior social development specialist.

The database sources information from police blotters, among others. 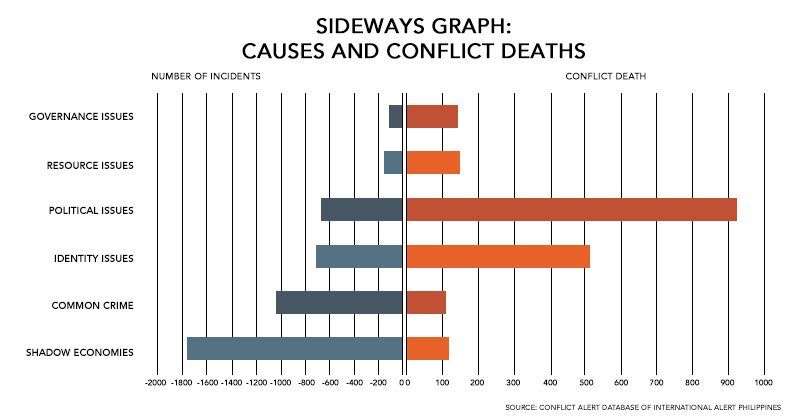 Politics main cause of violent deaths

Political issues are the main causes of violent deaths, followed by identity issues and then resource issues.

Maguindanao and Compostela Valley are the two “most violence-prone provinces in the database in terms of deaths,” said Lara.

The database shows the Abu Sayyaf is responsible for at least 482 deaths, the Bangsamoro Islamic Freedom Fighters for at least 463 deaths, and the Maute Group for at least 86 deaths in the past 5 years.

It shows that extremist groups spend more time fighting other groups at the community level – in cases such as rido – than fighting the government.

International Alert Philippines is the only known group to be tracking violent conflicts at the subnational level in the Philippines.

Conflict Alert also has data on violence in the Davao region, except in Davao City where police do not share data.

The monitoring system is funded by the Korea Trust Fund for Economic and Peace-Building Transitions, the World Bank, the Australian Department of Foreign Affairs and Trade, and the Royal Norwegian Government. – Rappler.com