Oct 27, 2016 12:22 PM PHT
Pia Ranada
Facebook Twitter Copy URL
Copied
'I apologize for the mistake and assure our countrymen that I had no intention of declaring war against anybody,' says the Agriculture Secretary 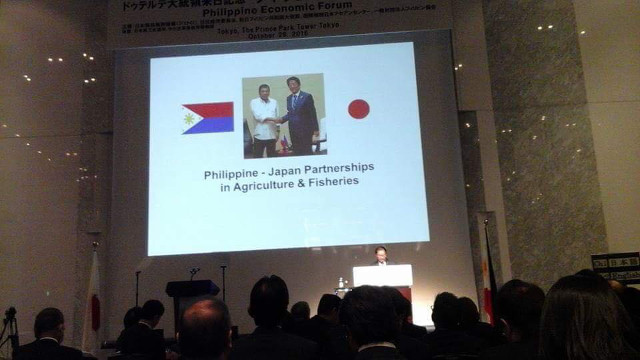 MANILA, Philippines – Agriculture Secretary Emmanuel Piñol apologized for the image of an inverted Philippine flag that appeared in his Powerpoint presentation during a business forum in Japan.

“I apologize for the mistake and assure our countrymen that I had no intention of declaring war against anybody. It was all an honest mistake,” said Piñol in a statement sent to media on Thursday, October 27.

The day before, he had given the presentation in front of Japanese and Filipino businessmen about the state of agriculture and agricultural investments in the Philippines.

The event was held during President Rodrigo Duterte’s 3-day official visit to Japan.

Piñol, calling the incident a “boo-boo,” said he was not given enough time to look over the presentation before he went onstage, hence the oversight.

“The material was emailed to me from Manila only last night. I was not able to prepare ahead of time because I was not advised that I would be making a presentation during the business forum,” he explained.

He admitted that displaying the inverted flag, with the red banner above the blue, means “that the country is at war.”

Netizens watching the livestreaming of the forum were quick to point out the flag. A viewer commented with sarcasm, “Baliktad ‘yung flag (The flag is inverted)…good news for us.”