Caught in the middle of the drug war

Oct 30, 2016 10:00 AM PHT
Alecs Ongcal
Facebook Twitter Copy URL
Copied
One is expected to surrender, otherwise feel unsafe. Yet if one does surrender, there is no assurance of safety even though a surrenderer is living a clean life.

MANILA, Philippines – Alan Almeda* dreamt of leaving his job as a maintenance painter, and to instead become a police officer. He admired his cousins and wanted to help rid his community of druggies.

In the last May elections, he voted for Rodrigo Duterte and Bongbong Marcos, believing that with an iron fist, they can push communities to develop faster.

Alan was preparing dinner inside their tiny home. While waiting for food to get cooked, he walked to the sari-sari store to buy and light a cigarette. Suddenly, a policeman put his arm around Alan’s shoulder and invited him to come with him.

While walking with the man, Alan saw children and women running and hiding, with other men also being confronted by police officers.

Startled, he reasoned, “Sir, may niluluto pa po ako, bumibili lang po ako ng mantika (Sir, I’m still cooking something, I was just buying cooking oil).” The police didn’t pay attention. Instead, the officer reassured Alan it would all be over soon. 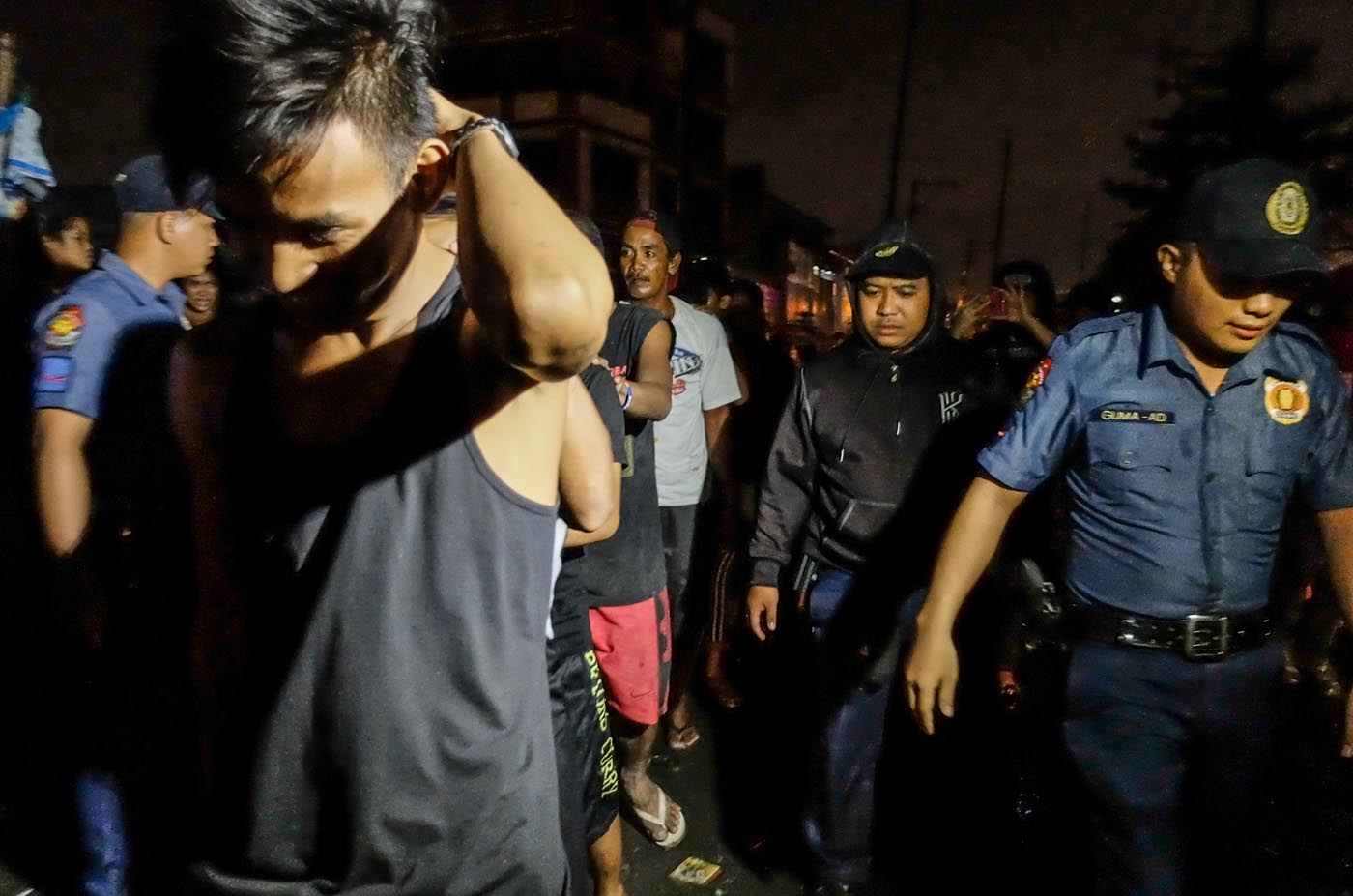 Alan was brought to their community’s basketball court where he saw familiar faces – his neighbors and some family friends, sitting together to form a square, staring back at him. He then sat with them and watched as people approached.

Suddenly, they heard a commotion. Alan followed the gaze of the rest and noticed another group approaching.

A man and a woman joined them with their hands cuffed, crying and covering their faces. Officers surrounded them with one holding a box that contained small sachets of shabu and paraphernalia. They were arrested.

They didn’t sit with Alan, but were placed on the other side of the court. Soon others joined the couple and the police announced they had arrested 9 individuals with drugs.

Moments after that, in a single file with hands stretched in front, they were all taken to the police station.

In a last attempt to break free, Alan asked that he be allowed to urinate, claiming to have urinary tract infection. The police didn’t budge.

The men sat beside each other in front of the police station. In groups of 10, they were escorted inside the station.

After the first group emerged, Alan’s group was brought upstairs. He was expecting a drug test or some process of verification, but instead they were told to sit around a table and were given papers to fill up.

People wanted to leave quickly. Some had difficulty understanding the form. Others could not even read or write. 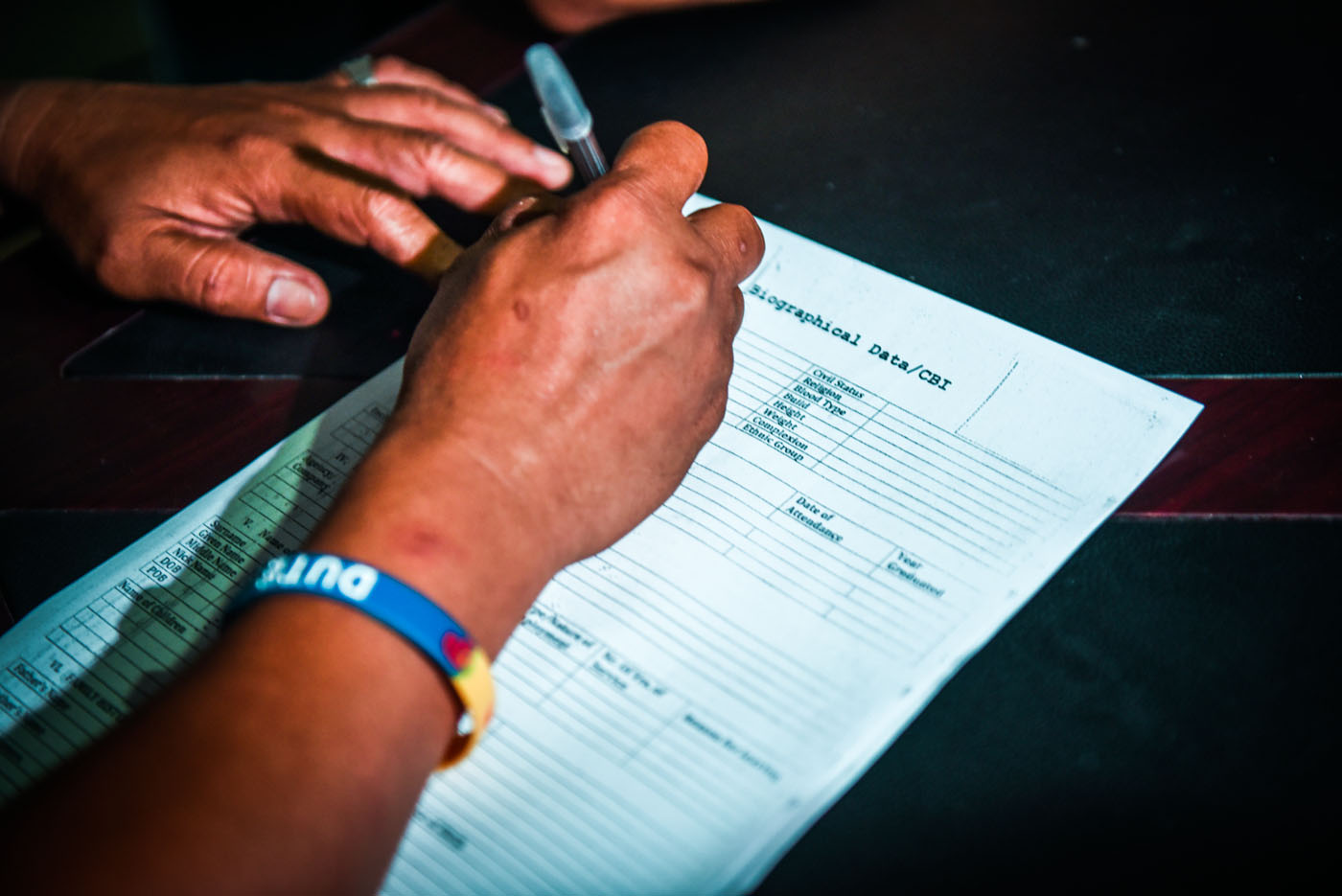 The first page was supposed to be biodata information. Scanning the next page, Alan saw it was a waiver form. Puzzled, he looked at the people around him – everyone signed the paper.

“Drugs? Hindi naman ako user. Wala naman akong maibibigay sa kanilang impormasyon. Wala akong kinalaman sa drugs. Hindi ko ito puwedeng pirmahan. Inosente ako (Drugs? I’m not a user. I won’t be able to give them any information. I have nothing to do with drugs. I can’t sign this. I’m innocent).” These thoughts ran in Alan’s head.

Despite denying his involvement in any drug-related activity, the police officer insisted that he sign the waiver form. Alan read it again, called the facilitator, and said he could not sign the form, because it is not true.

The officer stared back at him and asked if he was sure he was not involved in drugs. With his heart pounding, he said yes, he is clean.

An “X” mark substituted for Alan’s signature on the waiver form. He spared himself the trouble of being part of the police’s watch list.

Not all had same privilege of doing what Alan did. Some were taken forcibly. Several similar operations were conducted days after the police visited Alan’s community. 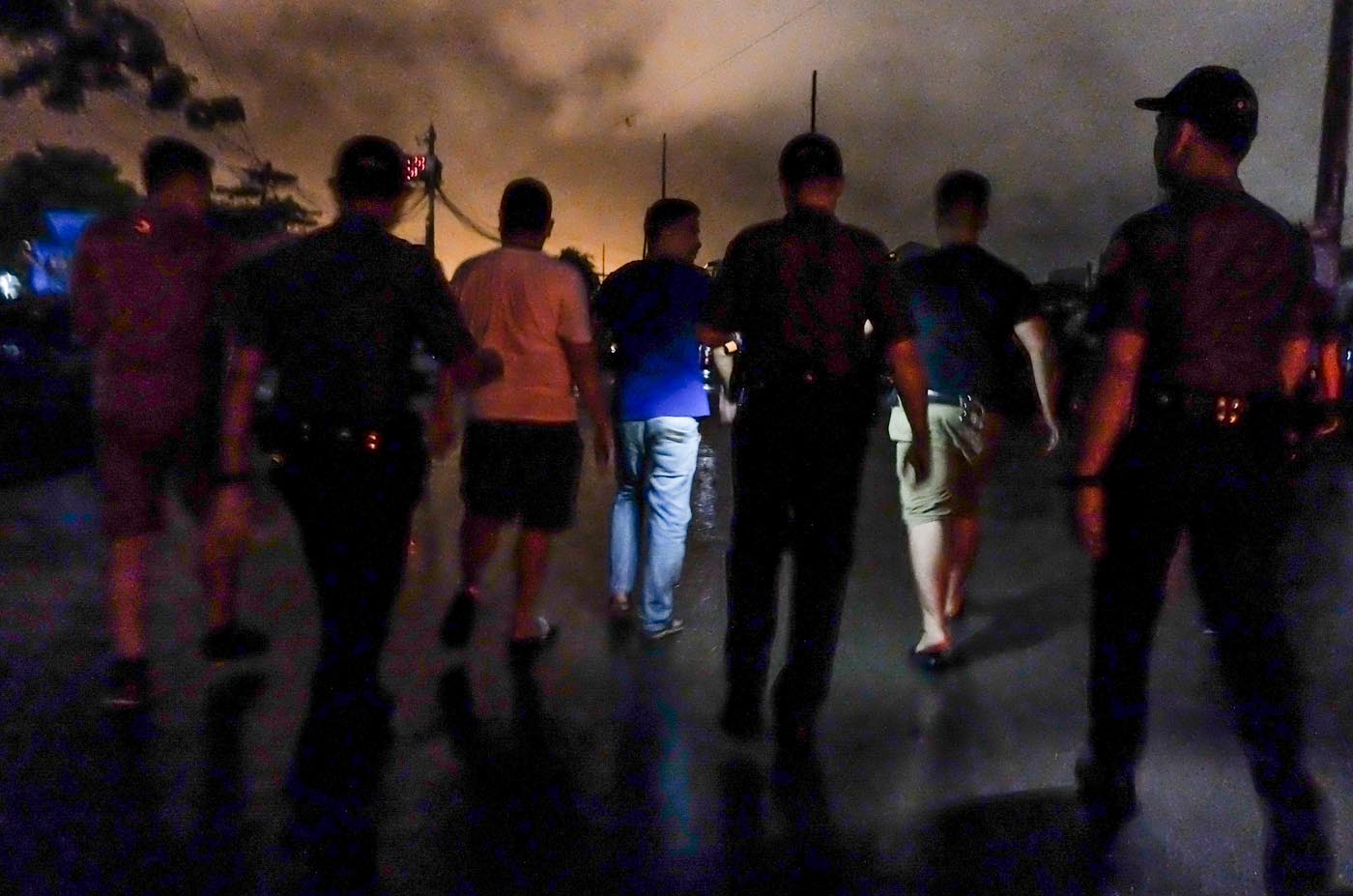 “Naghuhugas lang po ako ng pinggan, tapos sinabi nila sumama daw ako for verification lang daw (I was just washing the dishes when they told me to go with them for verification only),” said Cris.*

Russel* was taken by the police simply because he wasn’t wearing a shirt. Lee*, for his part, was watching television at home when the police suddenly took him.

In other communities, the police would barge inside houses and take the men. In others, children were even pulled away from their fathers.

People complained that the police did not allow them to decline signing the waiver form.

The groups were also collectively surprised to hear during the chief of police’s interview that they were tagged as “surrenderers.”

When asked why they did not leave, all of them said, “For verification daw. Kailangan sumama (We were told it’s for verification. We had to go).”

Scared to protest and run, they submitted. 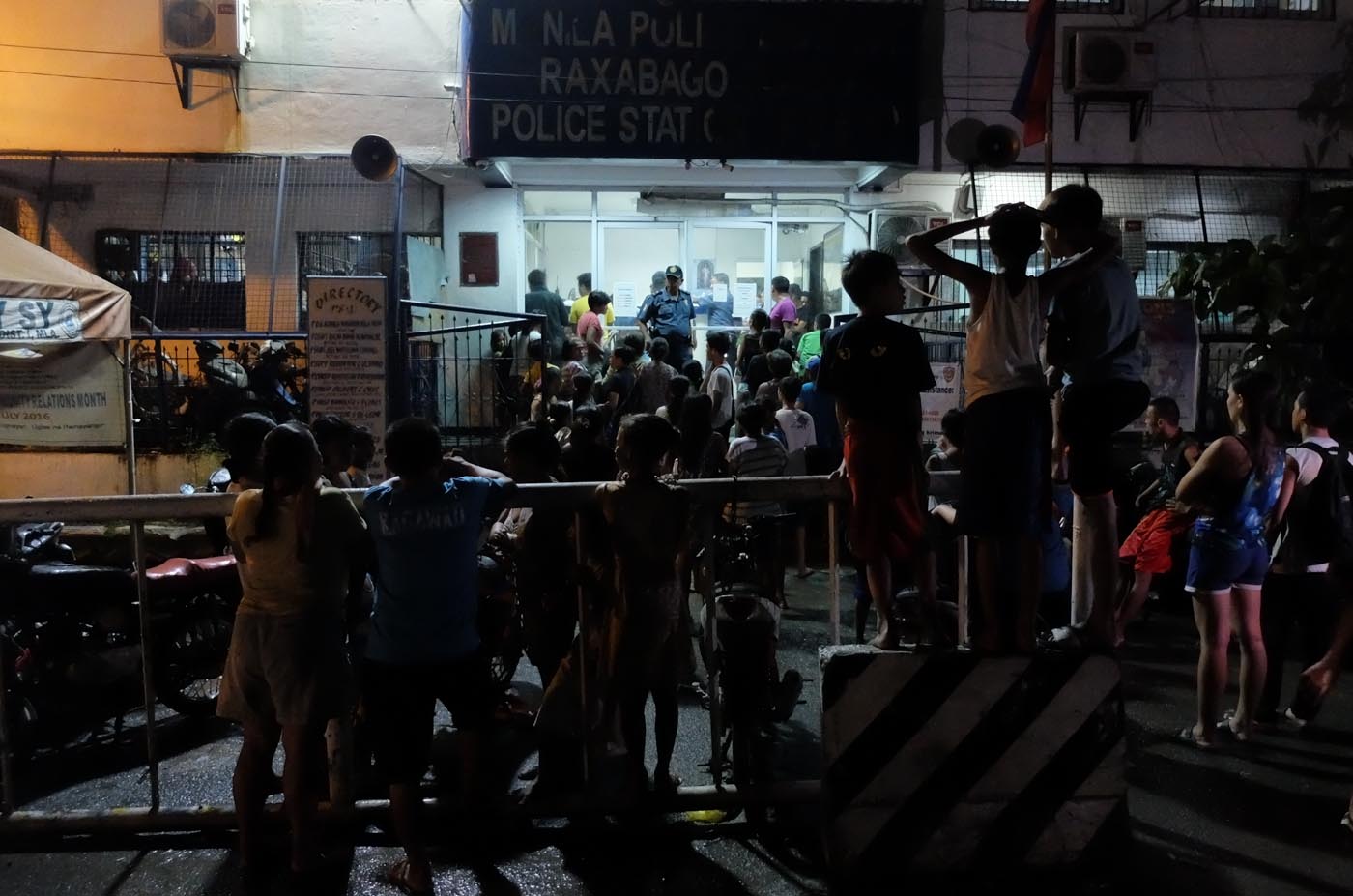 (Trust? I think it’s gone. I had some before. They invited me to be a policeman but I declined ever since that incident. Never mind, because even if I became a good policeman, if that’s what the other policemen do, I would be like a bad policeman too.)

With frustration in his eyes, he said: “Si Duterte binoto ko kasi gusto ko na mawala ang mga adik sa amin at para matira na lang ang mga matitino. Kaso, ‘yung mga matitino sinasama nila. Binoto ko na nga si Duterte, tapos ako din pala madadamay (I voted for Duterte because I wanted to rid our place of addicts so that only the upright would remain. But even they are being taken by the police. I voted for Duterte then now I’m also dragged into this mess).”

He also explained how the experience made him anxious. He noticed how the police would pick up any man who looked suspicious. “Mas nakakatakot ngayon kasi hindi mo alam kung kailan may papasok na pulis. Kahit anong oras nag-aalala ka,” he added.

(It’s scarier now because you don’t know when the police would come. You’re worried all the time.)

Alan’s friends would joke that he’s a user or pusher. When he and his friends see a group of policemen, they would run inside the house and hide on the second floor.

Alan said he now prefers the former administration to the current one. “Dati, hindi uso ang patayan, ngayon lang dumami simula ng umupo si Duterte dahil naghahabol siya sa quota niya na 6 months (Before killings were not in vogue. They increased in number ever since Duterte became the president because he’s rushing to meet his quota of 6 months),” he said.

‘Culture of fear and distrust’

“There is this culture of fear and distrust. This is very negative,” Dr Homer Yabut, a licensed psychologist said, after watching videos of the operation.

He said it’s natural for anyone to be scared of an operation where anyone can be taken, be accused of possessing drugs and even dealing drugs.

Situations pose a dilemma on whether or not to surrender. One is expected to surrender, otherwise feel unsafe. Yet if one does surrender, there is no assurance of safety even though a surrenderer is living a clean life, Yabut explained. 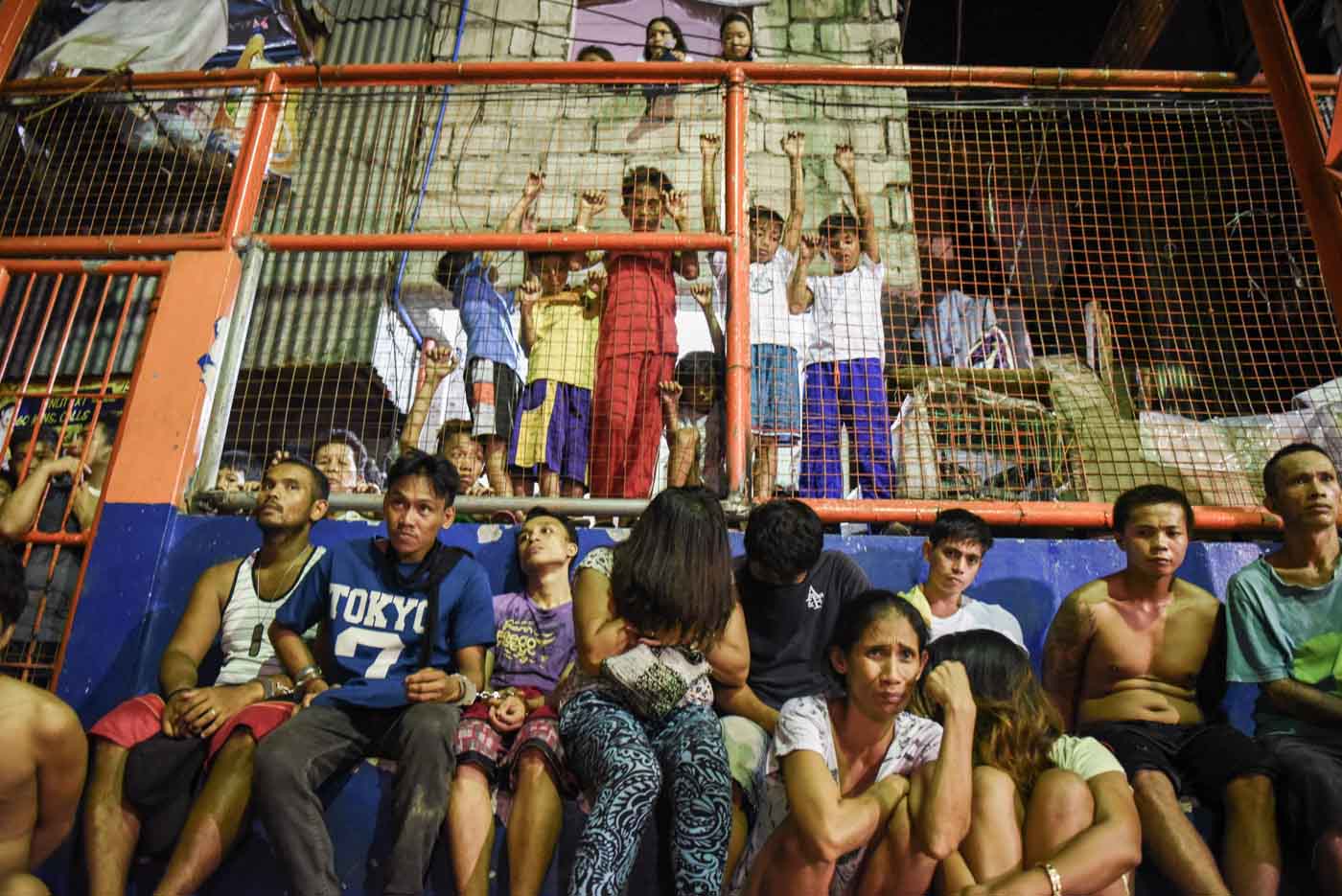 Yabut also said that being accused already carries with it a stigma that can affect one’s psychological being in the long run. This, in turn, affects the whole community as residents of that community can develop trauma and paranoia.

Yabut also said that if the accused run, the police can easily say “Nanlaban sila (They resisted arrest).” Because of that fear, the accused either fight back or run. This prompts a chain reaction where “violence begets violence” and victims are out for revenge.

Drug addiction is best approached as a mental illness that needs help and intervention that can be facilitated by rehabilitation centers.

Some residents in Alan’s community are uneasy whenever they see policemen. First instinct is to run and hide.

Yabut said that if that’s the case, “Is it really safe now? Or is it just an illusion that it’s safer?” – Rappler.com

*Not their real names